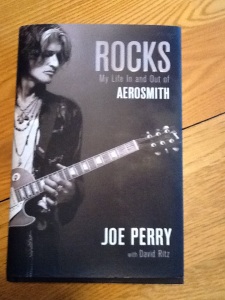 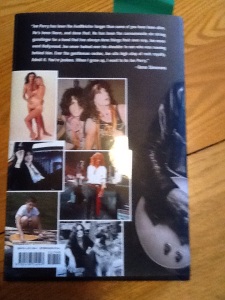 Another first here at Arena Rock. My first book review under the new category of ROCK 101…..Enjoy..

Joe Perry has to be one of the first cool looking rockstars I had ever seen! Kiss hid behind makeup at the time(late 70s and early 80s)but Joe had the rock swagger down pat/he played cool guitars/co wrote real cool tunes with lead singer Steven Tyler and just had Rocker written all over him!

My daughter Lauren asked me what I wanted for Xmas this year so this was a no brainer and  Lauren delivered the book of Perry to me on Xmas day! So once we kinda got the festivities out of the way I sat down and started in…..

Of course in  this day and age all these Ol Rock Dogs are putting out bios! Fair enough as no one buys records anymore so buy books I guess……

The book itself is layed out real cool with of course Joe on the cover but inside a ton of pics from growing up thru to Aerosmith in the 70s and even drops in a couple of Joe Perry Project pics for good measure( his second solo album I’ve Got The Rock n Rolls Again is a bonafide classic here at Arena Rock) right thru to today with some family pics!

Its evident that early on in the book you see a young Perry driven by the guitar and the sounds of the day growing up from Chuck Berry to the  Beatles and the Stones thru to Hendrix and Jeff Beck(who he met when he played a club in Boston) as Steve Tyler met Mick Jagger in his Tyler’s book(Does The Noise Inside My Head Bother You) before even Tyler and Perry hooked up.

Perry tells it as he see’s it especially when he talks about that time working as a 19 year old at a resteraunt in Lake Sunapee in New Hampshire when Steve Tyler and his band came up from Boston took over the diner being loud and obnoxious and making a mess of the place and well who had to clean up the mess after Tyler and crew left? That’s right folks Mr Perry! When there paths did cross again Tyler and Perry did indeed move to 1325 Commonwealth Ave in Boston and formed Aerosmith with Tom Hamilton,Joey Kramer and there original rhythm guitarist Ray Tabano who was a pal of Tyler’s but when Tabano wasn’t showing up for rehearsal it was decided by Tyler and Perry that Tabono should be cut loose so Tyler let Perry do the dirty work!

The inner early working years of Aerosmith are really a focus of the early part of the book and Perry goes into great detail with there early management,the struggles they had to endure to make it,and of course the drugs which he goes into great lengths about and has no problem telling the world about it! But this book goes deeper Into it than that on how he’s always been a family guy and that for him family comes first and of course his relationship with Tyler which can be at times volatile and creative at the same time!

He talks about his leaving Aerosmith over spilt milk(literally) his lean years fronting the Joe Perry Project,him rejoining Aerosmith,the manipulating paranoia of there manager Tim Collins. Joe leaves no stone unturned and for my money I love the fact that he goes in depth with the recordings of all there albums along the way. So yeah sure everyone loves a good story about debauchery but I also love hearing about how some of these albums were made. I’m gonna skip a couple. So for your reading enjoyment heres a quick rundown on how I heard it from Joe,well read it that was!!! ( for more indepth detail buy the frigging book!)

Here’s some Aero studio album info for Ya….

Aerosmith- the debut album was for Perry a bummer he loved the tunes but the production was not how he had wanted it to sound! Plus Tyler sang in a different range but overall Perry says hey,they got a record deal!

Toys In The Attic-Perry says this is the album that got them joining the big leagues Also there first with Jack Douglas producing. Interesting fact is that Perry writes in his book that he wrote the riff to Walk This Way sober back in 1975!

Rocks-Perry uses a 6 string bass on Back In The Saddle and during the recording of it passes the bass off and grabs a guitar and flings off the solo and it’s the take that we all have heard a million times over!

Done With Mirrors-Perry rejoins Aerosmith after 5 years away and they put this out and it fails with the public! Perry says nowadays he doesn’t diss this album as much as he knows theres pockets of fans out there that love this album(me and Tbone! Hello!) but at the time he says he was disappointed as the record sounded half finished to them!

Permanent Vacation- the bounce back record with the hits! Perry talks about in great detail the journey to Vancouver to record the next three records with new producers,outside songwriters(which drove Tyler crazy) but 5 million records later Perry says he’s grateful for the resurgence in there popularity!

Get A Grip- trouble from the get go. Started in LA went back to Vancouver and had issues with the mixing of the album…

Just Push Play- Perry pulls no punches here saying Tyler wanted to be hip with the times and some of these songs like Trip Hoppin are not Perrys deal and Perry pulls no punches that there producer Marti Friedrickson sided with Tyler all the time in the direction (Perry doesn’t like the sound) songs  and the cover as Perry says he was outvoted so the robotic cover he says was not his idea!

Music From Another Dimension- Joe says he loves the rockers on this album and he says all the ballads that Steve Tyler brought to the record Perry does not like except for one! He says the album got a bad rap from the public by the fact that people (like myself actually) said it was too ballad driven.

Like the fact that Perry is totally cool calling out issues when there are issues and it goes to show you that thru all the makings of every single Aero record they had problems even when they got sober!

Of course family life is a big part of the book as well and the drug use is already well documented within Aerosmith but he’s open and frank about his and Tyler’s relapse a few years back that almost cost Perry  his marriage and Joe pulls no punches in regards to Tyler’s girlfriend at the time.

Ok I wasn’t gonna go there with a drug story but one of which is kinda funny is on the Pump tour Skid Row was opening for Aerosmith and Perry says that the very first encounter he had with  Sebastian Bach (lead singer)the first thing Bach said to him was “Dude I wanna get high and smoke hash with you and Steven!” Perrys response was he laughed and said “that ain’t happening!”

Perry balances the book out very well with personal life and of course Aerostories! The whole Brand Tyler chapter is a crazy read! WTF was Tyler thinking? This book I would say is a  highly recommended!

Once A Rocker ….Always A Rocker….

17 thoughts on “Rock 101….Joe Perry/Rocks-My Life In And Out Of Aerosmith”