Hey all my friends! Here’s my best pal Tbone in his own words explaining the story behind the antics at the mic! Check it out and enjoy…..the video is at the end of T’s story! Take it away brother ……

My Friendship with Deke (the Blogmaster) is well documented through out many of the awesome stories and posts here at Arena Rock. I am an avid reader of everything posted on here. Sometimes more in the vein of a voyeur however, as I don’t always post comments. But I always enjoy the read none the less.

So it’s June 11, 2005, the night of my wedding to my beautiful wife Christine. Deke is not only my Best Man, but he also played a significant role in hooking us up. So he is “The Man” on this day.

It’s that time of the evening when the Best Man delivers his speech. Deke, being a classy guy and Good Friend, takes the high road and chooses not to roast me but rather finds clever ways to tells tales from our past with great humour while still allowing me to come across kind of cool at the same time.  Not an easy task, let me tell you.

So just as everyone thinks his speech is done, he utters a very common phrase “In closing…” which usually signals a neat and tidy little ending, maybe an “I love you man” moment. But NO, not Deke. He has suckered us all in. I am literally a “Sucker in a 3-Piece” at this moment. Fore he has saved the best ‘til last and proceeds to play a song which he has written for me.  His accomplices are the other groomsmen (my bros Darr & Rugg and also friend Tom). They pre-recorded the music, and background vocals onto CD, which is played by the DJ. But Deke performs the lead vocals as well as …. (Wait for it)….  Harmonica “Live” at the podium. Completely blew me away. Completely blew all 300+ in attendance away. Coolest ending to a Best Man Speech I have ever witnessed in person. And I’ve been to a lot of weddings.

So let’s see what Deke had Cooking on this “Hot Summer Night” …..

INTRO- Deke calls out to the DJ “Hit it Mark” and from the pre-recorded CD you can hear Rugg play a classic sleazy little blues-rock lick and we are all aboard Deke’s Magic Bus and all too willing to listen as he says” I wanna tell you a story, ‘bout a cool guy I know….”

FIRST/ SECOND VERSES-  Deke sets the stage by telling you how long we’ve known each other and then goes into some High School nostalgia while sandwiching the first of his two Harp solos in the middle, much to the shock and awe of everyone in attendance.

CHORUS-  Deke takes a well-deserved break from the mic, grabs a little sip of (let’s call it “water”) and lets the backing vocals take center stage for a moment. Classic Gang Vocals that would have made even Mutt Lange proud, recorded in my Brother Rugg’s furnace room. The same furnace room that the “Current River” album was recorded in 10 years earlier. If that furnace room could talk….

THIRD VERSE- My athletic abilities are called into question,and rightfully so, as Deke recalls some of my Sports Centre Top Ten Fail moments, followed by another classic Gang Chorus.

FINAL VERSE- Now my (Big Red’s) drinking is called into question…. And again rightfully so. And NO, I will not elaborate. LOL.

OUTRO- The boys knock out one last Chorus before Deke takes his whisky home with one last classic Harp Solo. 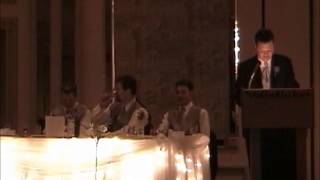