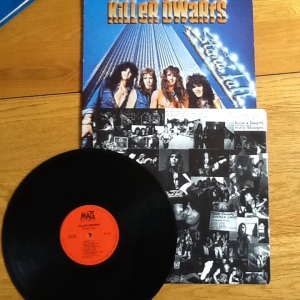 This is a request from reader Jenn Johnson….here Ya go!

Man 1986 and after I seen the two videos posted above( Keep The Spirit Alive and Stand Tall)  what can Ya say once I see them on the Much Music Pepsi Power Hour I had to get this album Stat!

Considering these guys weren’t on a major label at the time by the way they did these two videos with a real great sense of humour and the packaging of the Stand Tall vinyl(lyrics,pics) it was very impressive I mean compared to say when I bought new releases by major label bands like  Ratt there was no packaging but a clear sleeve to keep the record in!(meh) so full Kudos to the Dwarfs you made this record seeking young rock guy in 1986 at the age of 19 very impressed!

Also the fact that all there names ended in Dwarf was fuckin funny as hell….seriously though lets explore this little gem of a cooker from Russ,Mike,Darrell and Bad Rondo…….

STAND TALL- all 4 Dwarfs kick down the walls and the song trucks forward and hey these guys mean business the verses,chorus,music everything is here all rolled into one little kick ass opener! Full props to the person or persons who came up with the video idea! The cool thing is here we are in 2015 and the video still holds up well! Kids this is how records were made back in 1986! Ha! It’s also clear that there will be no moping around with the lyrics Stand Tall ….Stick To To Your Guns and kick ass if anyone bugs Ya! Great start!

HUMAN SURVIVAL- Mike opens with a power riff and for the next four plus minutes Russ tells us all how we will survive. Don’t give up hope peeps Sez the Dwafs and by golly I won’t! Good song with a mid tempo groove!

UP TO YOU AND ME-some creepy eery sounds start the song and Rondo and his bass do some Simmons like do,do,do and he locks it in with Darrell on drums and this is borderline ballady kinda maybe ,not saying but it features some nice acoustic guitar mixed with electric of course and the song ramps up come chorus time!

BORDERLINE-it’s about walking the fine line on the Borderline! This is a no frills straight rock song and the Dwarfs are making sure that the   Winnibego is still gassed up cuz the wheels aren’t coming off Til the party ends!

KEEP THE SPIRIT ALIVE-one of the coolest thing about these guys is not only KTSA a great song but the video as well actually the two videos (Stand Tall being the other)are what sold me at the time plus this song is about walking before you run and not giving up! Positive vibes all around here folks! The verse,prechorus,chorus,guitar solo,drums,singing and bassing is all here what a Gem of a tune! When your having a shitty day play this track as I posted the video for it! If the creativness of the video doesn’t make you giggle your fucked! This in 86 was a great track in 2015 I still feel the same way! Love the tempo just a straight forward rock track! Brilliant !

BELIEVE IN ME-Umm yeah these guys wrote a great track here and it shows in the chorus! They still play this song today well maybe not today but when myself and Tbone caught them on there Reunion Of Scribes tour about 12 years ago here in Tbay at the Inntowner (bar) they rocked it! That’s the cool thing about these guys as well they write tunes that ain’t gonna bum Ya out! They give Ya hope and promise so Ya Believe In Me! Like I said the chorus is the money shot…super catchy!

DO OR DIE-Darrell Dwarf lays down the the drum groove and the great thing is the band is not letting down even this far into there album! Do Or Die says Russ and I believe him i really do! Mike throws down a good solo while Bad Rondo on bass hammers the pedal to the metal !

OUT IN THE STREETS-Mike starts off the tune with a power riff followed by some soloing right off the hop! Russ grabs Ya by the neck and takes us down to the street and tells us how to live. Don’t give up kick ass is what he’s saying!

BITE THE HAND THAT FEEDS-some add texture at the beginning of this song with the crowd mixed in (like Def  Leps Rocks Off from On Through The Night) and Mike and Darrell Dwarf rocket the ship straight to the moon at rapid speed! Slam Bam Thank you Mam! This song rocks fast and Russ keeps up with the vocals and Rondo nails the door closed with his bass! Awesome way to end a album …basically a kick down the door scorcher!

IN CONCLUSION- what a great little ball of independent Rock in the form of Stand Tall! These guys did it there way on this release and they should be commended for that! The Dwarfs put the time and effort into the packaging of the LP(lyrics,pics) the videos and the songs! I bought this back in 1986 and I still have it.

Now on Facecrack I follow Darrell ‘Dunk’ Miller (Dwarf) and he’s a pretty chill laid back dude and he always answers whatever ?’s are thrown his way. Anyhoo a few weeks back some fella from the USA was looking for a vinyl copy of Stand Tall and some doofus answered back saying he had a copy to sell for $1000! And if he wanted as well he would sell him the debut Dwarfs album as well for $2000. Dunk interjected saying that was to put it politely “Steep” Ya no shit Sez I. $3000 for two records! Geez dude (owner of the 2 Dwarfs albums )have your head fuckin checked would Ya!

Would I sell my copy your asking …Nope! I mean I have had it for like 29 years so what’s another 29 years ..than we can talk! Ha!