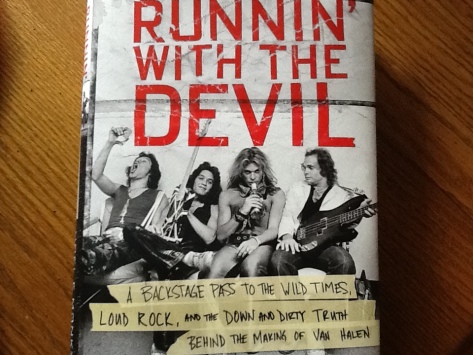 So here we finally get 32 years after former Van Halen manager Noel Monk gets the heave-ho from our favourite two twisted dutch brothers Eddie & Alex Van Halen the book(Runnin With The Devil) which chronicles  Noel’s first hand account of trying to harness in Van Halen during the years of Monk’s  managing tenure of the band.(1978-85).

Now if your asking why now  32 years later after being fired would a book come out now. Well as Noel himself writes a final settlement back in 85 meant no publishing a book for years…so it’s now time!

Basically it boiled down to this. Noel managed(tried to) while everything else around it seems was a shit show to say the least!

Speaking of shit shows Noel was actually the road manager for the Sex Pistols on there ill-fated 1978 tour of the United States when after two weeks they were sent packing back to England. Noel had to deal with Sid Vicious & Johnny Rotten so I guess that was a good as any training ground for what would become Monk’s gig with Van Halen!(only it lasted longer than 2 weeks managing Halen)

Monk was jobless after the Pistols gig and but in no time was hired as Halens Road Manager once the debut self titled Halen album hit the streets in 1978. Halen at the time was manged by Marshall Berle who was canned once the band started selling albums and at the end of the tour everyone  realised they were $1.2 Million in debt.  VH also learned quickly that all the dressing rooms that you destroy and all the limo rides/paying the road crew etc comes out  of your pocket at the end of the day. The fact that Berle had Halen sign a crappy record deal also didn’t help his cause. Berle got tossed and hooked up with another L.A act and that would be RATT.

Cool to read that there first ever tour was playing third on a bill with Journey and Montrose. Van Halen and Monk figured it out pretty quick that they were selling a ton of tickets yet playing third on the bill which meant for Halen small dressing room/small stage space/hardly any soundchecks yet the debut Halen went Gold in 3 months so Monk and Crew would throw huge backstage parties while Journey and Montrose would be playing their show much to the chagrin of Journeys management.

Basically Halen didn’t give a Fuck about anything back than. Noel writes that the camaraderie between the band members was the best as it was the “Us against everyone” philosophy. Over time he writes to no one’s  surprise  that evaporated!

If anyone out there ever meets Steve Perry ask him if he likes guacamole! 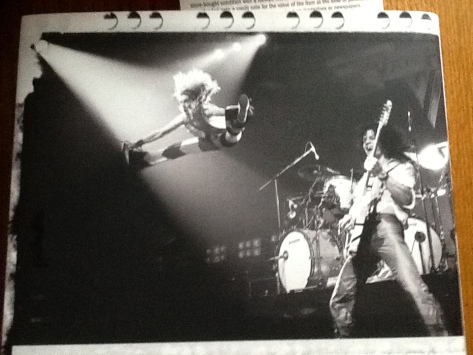 So Monk begins his tenure as the Captain of the S.S Halen. It’s amazing he didn’t totally lose his own marbles keeping this boat afloat but at the end of the day Ed and Alex made Noel walk the plank.

Course the book is filled with ton of stories and that’s  what we want right?!

Drugs and Alcohol  which to no ones surprise is featured predominately throughout. It’s all here Weed/Coke/Booze these dudes were wired tighter than a top but they all had one goal in common and that was World Domination.

Everything is over the top back than especially when Lead Singer David Lee Roth was taking over (back in the early 80’s ) as the best front-man in Rock. Not vocally perse but with the acrobatics that was part of his stage routine. Offstage though was a whole other story. One of the interesting reads  of the book is in regards to how they travelled early on. Halen would fly commercial flights from city to city and it was Monk’s job to get the troops down to the lobby to catch their flights. The last one always to show up was Dave. Monk for a while thought Roth was being an ass as he wouldn’t pack, his hotel room would be a disaster and Monk would have to get Dave to the lobby where the rest of Halen would be continuously pissed at Dave for taking his time.

After a few flights this way Monk realised that Roth was afraid of flying as a Monk points out Roth always wanted to be in charge of everything. Sitting on an air plane Roth had no control.

Everyone knows that by 1981’s Fair Warning album there was tensions between Roth and the Brothers. Monk points out it started back in 1980  during the recording of Woman & Children First.

Monk writes that indeed a “Musical Rift” was starting to happen between Ed and Dave(SHOCKER!) back in 1980 when  problems started…

Monk goes into detail about the music business as well. When VH was about to release  VH 2 in 1979 he was called into the Billboard offices and was told by a high-ranking official where they would like the soon to be released album debut on the charts. Monk states he was stunned as he was told they could come in the Top 10 if they chose to. Monk was quick to say how about the mid forties so it would look like the album was rising instead of debuting high and sliding down the charts. Payback for the chart debut would be made by VH in Billboard….

How about some Payola? Yep, Noel writes in  great detail about when 1981’s Fair Warning went to gold record status and stalled in sales (there were no real “single like” tracks on the guitar heavy Fair Warning record) VH/Monk were freaking out so as Monk got summoned to Warner Brother records, someone told him on the side if they wanted Fair Warning to start selling than VH would have to cough up $200,000 of their own money and pay certain stations across the States $5000 each to get the album played at which VH did, not happily mind you but it worked and Fair Warning went Double Platinum.

Early 1982 Warner Brothers is begging for Halen product. VH has nothing new to offer so they record Pretty Woman and the single takes off which no one thought it would as Pretty Woman was released just to keep the Halen name out in the public. This is why 82’s Diver Down was half covers/half originals as it was recorded in about 3 weeks and rushed out due to the  single shooting up the charts!

These kind of stories actually fascinate me more for as we all know the Party Deal of VH.(  I still like to read about Krell Wars that Roth/Ed would indulge in )

Monk describes throughout the book the chaos that surrounded this band from 1978-85 when Noel’s 30 day contract was not renewed. Yup! You read that right for the 7 years he worked for VH they would only renew his contract every 30 days….

This is a great read into a band that basically was a” Professional Shit Show”. I’m amazed they could record/tour at a clip for that time and not actually kill each other.

1984 the mega album from VH you would think they would be on top of the world with album sales and tickets sold right? Wrong-o! Years of frustration with everyone come to a boil when Roth announces to everyone his cover E.P.

I will leave it at that!

I could go on with a boatload of stories(Roth being forced into a straight jacket being one) but the one common dominator being that we all know is that ex VH Bassist Michael Anthony is indeed the nicest guy in Rock.  Yes he is by all accounts and Monk confirms many a time over how great a guy Mikey is. No smut on him in this book whatsover…

Below is what Roth/Ed and Alex wanted  Anthony to  sign ….. Nice way to treat a bandmate eh? 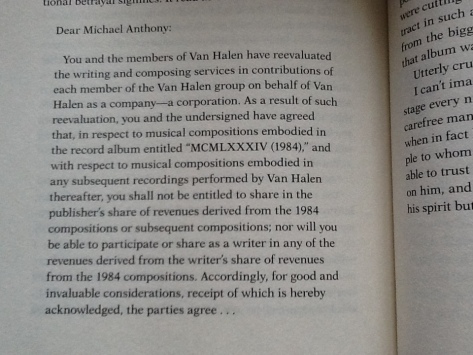 This a fascinating read. Get This!