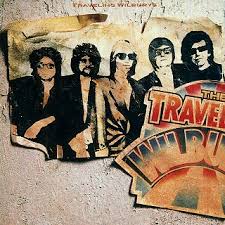 How about this Supergroup calling themselves the Traveling Wilburys featuring 5 Wilbury Brothers who go by the names of Nelson/Lefty/Otis/Charlie T and Lucky.

Seriously some heavy hitters in the music biz listed above folk’s!

Mind you I thought the George Harrison album Cloud Nine was pretty decent and George was on top literally with Cloud Nine with When We Was Fab which was great song with a pretty slick video to go along with it . So when the Wiburys hit the retail shelves in 88 this was a no brainer pickup.

Vol 1 is 10 tracks featuring just straight ahead easy rock. Nothing calculated. Just soundS like 5 friends getting together and kicking out some mellow jams!

One of the interesting tracks is Tweeter &The Monkey Man  written by Dylan but submitted and credited to all the Wilburys. You gotta love this track as through all the mellowness it’s a tune about Cocaine/Hash/Dirty Cop and a sister named Jan!