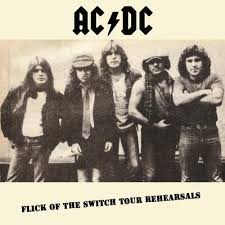 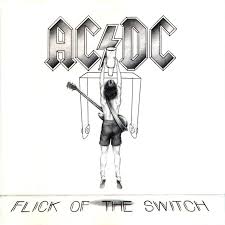 1983 and AC/DC were not selling anywhere near the numbers they were with their two previous releases.(Back In Black & For Those About To Rock)

DC 83 was a different beast. By than Angus & Malcolm Young took over the controls and did it how they wanted to do it. Gone was the gloss  production of the Mutt Lange era. Back in was the raw like sounding Flick of the Switch album which dropped in the summer of 1983 when I was 16. Upon its release it was quick purchase for me!

Right after that I taped it onto cassette which made a great listen on my Walkman when I would ride my bike to my kitchen summer job washing dishes which started at 6 am! Rising Power indeed!

Speaking of which. Opener Rising Power  took me all of 10 seconds to realize that this was cranky DC  street rock. A no-nonsense approach to the songs on here. Came across this video of  them jamming Rising Power for there 83 Tour. Check it out below. Looks like Brian Johnson’s appendix are gonna explode ….Awesome!

This AC/DC album knocked me off my block as it was sonically what I was looking for at the time! An album that featured no hits from a band who didn’t give a Shit!

There were other bands in 83 that had hits and two of them were Def Leppard with Pyromania and Quiet Riot with Metal Health! Those two albums especially Lep had songs tailor-made for radio at that time. AC/DC on the other had sold millions of copies into the early 80’s of course between Back In Black and For Those About To Rock so I guess the powers that be must have been shocked when Malcolm and Angus handed in their final product!

Ha! The suits were probably non to pleased about this! Kinda like when I would hand in my Homework the Teacher would give me that glaze over stare so I’m sure the Young Brothers got that glare from there Record Company Boss when they handed in the masters of this album. Course AC/DC was dealing with millions and millions of dollars where I was just trying to scrape by with a pass. In other words I would hand in 3/4’s Filler to get a decent grade…hahaha!

On the other hand! I loved it..

This House is on Fire/Nervous Shakedown/Flick of the Switch/Guns For Hire/Bedlam In Belgium are songs that just grab you by the throat and smack you outside the head with the No Frills approach. The guitars are mixed loud on this album.

That is what I love…Don’t get me wrong that this album ranks over the output of Bon Scott. It doesn’t, but Flick of The Switch at that point in time back  in the Summer of 1983 told me through their music and sound that they really didn’t give a crap what the big fad was that year!

Your with em or you’re not with em!

I was with em!

How many times has my Switch been Flicked!(HAHA)