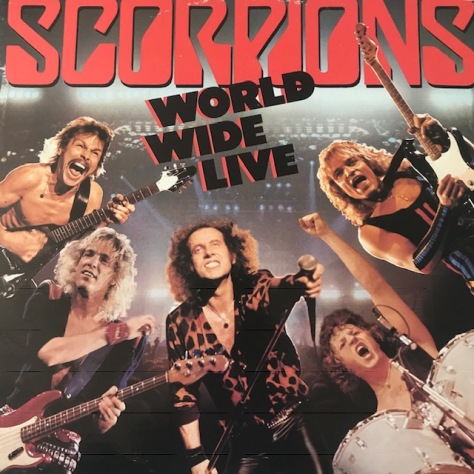 When I think of Live albums from 1985 one album comes right to my mind right away and that would be Iron Maiden’s ‘Live After Death’ release which set the bar very high on how you deliver to the masses an album chock full of pictures/booklet/tour dates/information on  the tour itself! Nobody since or before 1985 has topped what Maiden did in regard to the packaging of ‘Live After Death’.

Another Live Album that came out that year is a real fantastic blast of Rock is from those fun-loving Germans that we know as Ze ‘SCORPIONS’ when they unleashed the classic  ‘World Wide Live’ as well in 1985!

My listening curve of the Scorpions in 1985 was owning the brilliant 1982 release ‘Blackout’and 1984’s pretty damn good ‘Love at First Sting’.

So when I seen the ads in Circus Magazine that the Scorps would be releasing a double live album I was onboard. Once I bought this album and took it home and spun it for the first time I had not heard 8 of these tracks before as they came from albums that I had not heard by the Scorps! A total score as far as I’m concerned! 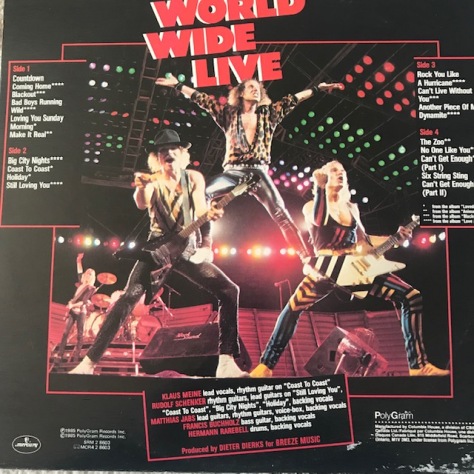 The packaging was pretty cool as well slick-looking double gatefold. How about that picture taken in the gatefold! Info about the tour and such and a bunch of pics on the record sleeves as well. All in all a decent looking package….

The music! Well what can you say. The Scorps especially the guitar of Rudolf Scheneker and Matthais Jabs is brilliant to say the least! Jabs is off the charts where he’s ripping up his fretboard on tunes like ‘Blackout/Bad Boys Running Wild/Rock You Like A Hurricane’ and all points in-between.  Lead Throat Klaus Meine as well can belt it out  on tunes like ‘Dynamite/Another Piece of Meat’ but can dial it back on the slower stuff like ‘Still Loving You/ No One Like You’.  I must add that World Wide Live was the first time I ever heard ‘Make it Real’ which is one of the best Scorps songs in the catalogue. Jabs slams down the gauntlet riffing at all intervals but never overplaying and turning his solo’s into wank fest’s! Plus Jabs had hair on his head back than before he went to the ball cap and bandanna look later on! I posted a clip of another one of the best Scorps tracks titled ‘The Zoo’ from 1985!  Jabs does the talk box thingy and man I just love the stomp of this track!

The Scorps in 1985 were Flying High(cough cough) in Record Sales and Big Rock Shows ! Check it out below!

The Rhythm  Section of drummer Herman Rarebell and Bassist Francais Bucholz hold the fort down with a straight ahead no frills approach which suits the Scorps sound perfect!

World Wide Live is a fantastic listen! It Rocks indeed like a Hurricane(Ha..that was pathetic but I’m letting that last line ride) as the Scorpions could deliver huge Fireballs of Rock!

If you come across this album in any format grab it and CRANK IT!