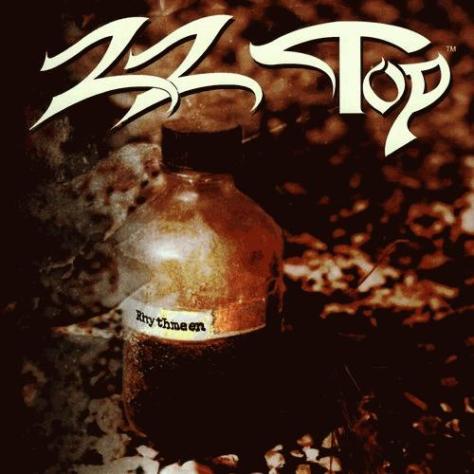 It only takes Billy Gibbons two verses in on 1996’s title track Rhythmeem  to tell us the listener where we are headed!

There ya have it folks! The song  that kicks off what I would consider in my all Time Top 3 ZZ Album’s as voted by the Law Firm  of Deke/Derek and Stephen!

Yeah man I’m serious this album cooks up a hot batch of Sleazy  Style Blues wrangling around in some seedy shady sketched out Five and Dime watering hole in the backwoods of ZZ County!

Speaking of 1996. It was a funny year for new releases in the Old School Rock Field!

Judas Priest was Ripping around with a New Singer while Iron Maiden were trying to Blaze a new path with their New Lead Singer.  Van Halen meanwhile  were hyping us with some Roth n Roll to plug a new Greatest Hits set!

But at least one-act was still intact ….

So the Two LongBeards and Stache deliver a scorcher of a 12 pack of Rock! I mean look at this track listing…

Those are just plain cool song titles if anything but of course the music does indeed do the talking!

The sound of this album is phenomenal. Raw Bluesy Rock as the mix of the drums sound excellent and this album is produced (by Joe Hardy) but yet doesn’t sound overproduced but keeping it simple.

Gibbons and his Guitar shine on this album. Every track is a Guitar Extravaganza and Billy doesn’t  over do it with the playing. Just listen to the track below to get an idea what I’m going on about…

Vincent Price Blues what a friggin brilliant track! Did ya listen to all 6 minutes of Blues Rock done right? I sure as Hell hope so!

This album is fantastic. Better yet there is two end of the album GEMS as I call em which are She’s Just Killing Me  followed by My Mind  Is Gone are brilliant as Billy-Dusty- Frank just strip the sound back to the basics as a trio and deal away with the ZZ Synth and just blast full tacos of  ZZ Rock…

Actually the whole album is basically down to a three-piece whether Billy did it all himself or not who knows as the other two guys are credited of course but you never know with these guys as Billy wrote all the songs but at least you know Dusty showed up one day to the studio to lay down the lead vocal of Loaded so…..

I’m sure ZZ’s Record Company lost their marbles over the fact that there were no real fancy selling tracks on Rhythmeem except for the Hard Blues Driven Harmonica squealing Whats Up With That.

Come to think of it  after 1990’s Recycler album ZZ were free agents in regards as a band with no label and of course  all the labels tossed a ton of dough at acts that were free agents in the Music Biz like Motley Crue/R.E.M and Aerosmith who got huge money deals…

ZZ Top will become the latest pop act to jump on the recording industry’s mega-deal bandwagon when RCA Records officially announces the signing of a five-album pact–valued at more than $30 million….

Good news for ZZ Top but man the sales of albums after Recycler just hit bottom.  We all know Motley’s deal. Sign the new Contract/Fire the Lead Singer and watch your sales plummet..

Aerosmith signed their new recording deal with money in hand to their new company Sony back in 1991 when they owed Geffen one more album at the time (Get A Grip which came out in 1993!) and Aero laughed all the way to the tune of $25 million to the bank!

I’m sure in all these cases some heads rolled at the Music Company HQ’s  after these signings when the sales of the 90’s did not come close to the sales of these bands 90’s output!

Ok…sorry to get off track but what I’m getting at is even though these albums by the Juggernaut acts of the 80’s didn’t sell anywhere near the numbers in the 90’s there were some fantastic releases that went ignored..

Rythmeem was one of em!