Pretty cool to come across this live album after so many years of not hearing it!

Nazareth recorded It’s Naz back on May 23 1981! So what better way than to post it today 38 years ago the day it was recorded live in Vancouver British Columbia!

Back in late 1981, it was my fellow Record A-Holic Pal Muc who got It’s Naz pretty much right away after its September 81 release.

Most people myself included called this album just Snaz but on the official Nazareth page, they call the album It’s Naz! HA..

It’s Naz is a brilliant live album. Plain and Simple! Hell, you get the live feel vibe when you hear Pete Townsend Rough Boys playing as the intro tape before the start of opener Telegram!

Let’s press rewind on Telegram for a second. This is the very first Nazareth song I had ever heard and it takes Lead Vocalist Dan McCafferty to sing the opening verse and for me to go “WHUT?”

‘Sent a telegram today
Tomorrow you’ll be on your way
Could be Memphis or L.A.
No questions just get out and play.’

I had never heard a rock voice like Dan’s ever up to that point in my life. This dude did not give a shit that he was going to toss a lung at any given point while singing these songs.

In other words. Brillaint!

Posted below is Telegraph…check this action out…

But man when the rest of the band digs in the groove of Telegraph its apparent that Nazareth has a sound of there own and that is one of the reasons why I was so psyched to score my own copy of it recently on double vinyl! (I only ever owned on a prerecorded cassette tape that Muc taped for me back in 1981) 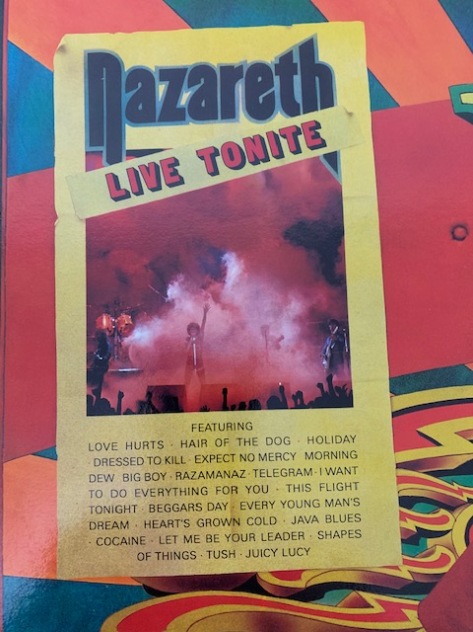 So after that moment of MaCafferty and his voice blowing my brains out comes, Dan as he speaks to the Vancouver crowd right before the second tune in Razamanaz ,with one of the greatest verbal one-liners ever on recorded vinyl!

‘Hey, Vancouver! Now I remember when we like to play you guys are alright”

Nazareth steamrolls through a bunch of tracks but the real wild thing is that 8 of the albums 20 tracks are cover tunes! (Juicy Lucy and Morning Dew are the lone two new studio tracks on the album) Yep, you read that right! See the thing is Nazareth can take a tune like Joni Mitchells This Flight Tonight or JJ Cales‘s Cocaine and make it there own!

The band that night in Vancouver was top notch! I love how Dan sings with that gruff Scottish tough guy voice yet the backing vocals are crisp and clear! What a sound and when you hear these guys on the radio even today you know its Naz! 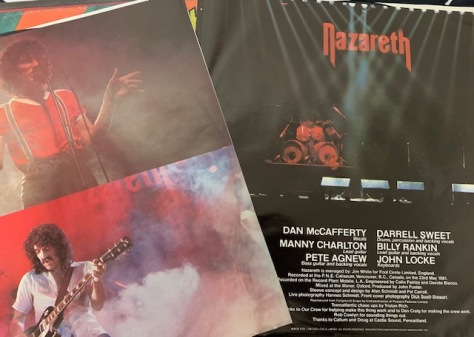 This 1981 incarnation of Nazareth was a superb act and even though drummer Darrell Sweet and keyboardist John Locke have passed on this album shows what great musicians this band had.

The funny thing about Nazareth is that outside the Greatest Hits release it’s the only Nazareth I own! Weird I know but I’m cool with just this album. I’m sure I’m missing out but  I can be a puzzle at times, to say the least! haha

Such a mindblower to once again come across this album after all these years and finally own a copy! Speaking of which iTunes doesn’t even have it so vinyl is the only copy for me…

So brilliant! Get Its Snaz! Down n Dirty Rock at it’s finest!

How about a 5 and half a minute live version of Hair of a Dog before you start your day!