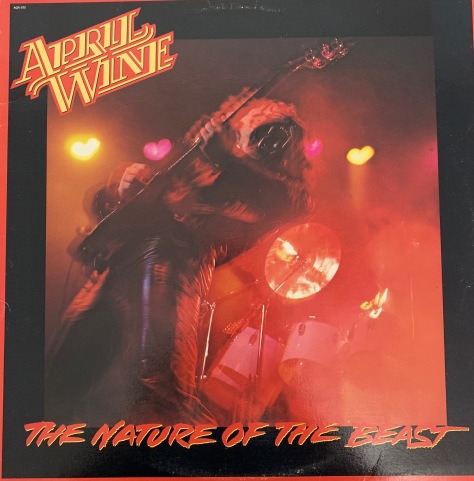 April Wine hit Gold and Platinum in the US of A with Nature of the Beast back in 1981! No small feat for the band hailing from Montreal Canada!

This album was everywhere and my pal Muc was the first to snag this album as I was with him when he bought it at some point back in 81 as well!

For myself, it wasn’t until a few weeks back (May 2019) that I finally got myself a copy of Nature of the Beast! 38 years later! HA!

April Wine was a band that I had some stuff.  The live One More For The Road and Greatest Hits were two I owned that were released at some point back in the ’80s as well as back in 1985 I bought that horrendous Wine album ‘Walking Through Fire’ on cassette tape which when I think about it I was 18 and I Like To Rock! No such thing as that on that tape. I got burned!

But back when the Wine could rock they put out NOTB which has a ton of Hard Rock AOR stuff that grabs you the listener by the ear!

The pressure was on Myles Goodwyn to deliver a bunch of hard rock tracks for this being April Wines 9th album up to that point and Myles does indeed deliver with 10 of the 11 albums tracks coming from Goodwyn! Not only that but Goodwyn produced this album along with Mike Stone. 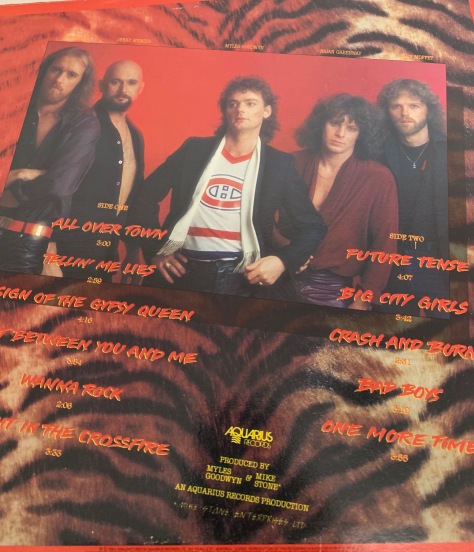 Opener All Over Town opens the album and is a sure firecracker of a winner! Myles, I will give him credit as he knows how to compose simple yet effective hard rock nuggets.

Caught in the Crossfire/Future Tense/Crash and Burn are winners on this album that fuse the hard rock trimmings that have the band firing on all four rock cylinders!

I liked the fact with the inside sleeve not only did you get the lyrics but they listed on each track who did the guitar solos since there were three guitar dudes in April Wine! Check out Future Tense below. I was always a sucker for that synthesizer like voice during the chorus of this tune. Kinda like Mr Roboto jacked up on roids!

The two biggie hits from NOTB were Just Between You and Me and Sign of the Gypsy Queen.

Just Between You and Me has to be the forerunner of the huge Power Ballad which every Hairspray Act coming out after 1981 adapted too, April Wine gets no credit and specifically Goodwyn who wrote the track in which this song lifts off right off the start with the guitar solo which is a brilliant songwriting move. Thinking outside the box moment if there ever was one!

Sign of the Gypsy Queen is the cover tune but everyone probably thinks it’s a Wine tune anyways! A great straight-ahead rocker that has a classic breakdown in the middle of the song and then ramps back up to speed into the snappy happy chorus!

Even though this was a good album I never understood the marketing of this band.  As right after the success of NOTB an album filled with rockers comes from the Suits at the company releasing  The Best of April Wine: The Rock Ballads. An album that I had no interest in whatsoever back in 81 as a 15-year-old or in 2019 as 51 year old for that matter.

Kudos to April Wine though as for this album they hit one out of the park. If you are to own an album by these guys this would be the one!