Ok Folk’s! Remember that time Bon Jovi was a dangerous catchy hard rocking act back in time say from 1984-1992?

Yeah, I do before Jon Bon Jovi changed a once serious rock live band into some cheesy Vegas act with a bunch of musicians that no one cares about!

I will always give Jon credit as when I caught that Jersey Tour back in 1989 with pal Tbone in tow Bon Jovi meant business as a live show! So good than over time the wheels came off and I don’t fuckin care for anything that he does now! Sure his business is booming on the live circuit playing to 50,000 without Richie Sambora is impressive, to say the least, but his albums or the clips I have watched on Youtube are ….!

In 1987 when Jon was selling millions of albums out came this Double EP on vinyl up to a few months ago, I  had never even known it existed!

Pretty cool as its a Gatefold! Upon further inspection here are the songs from this killer EP below! 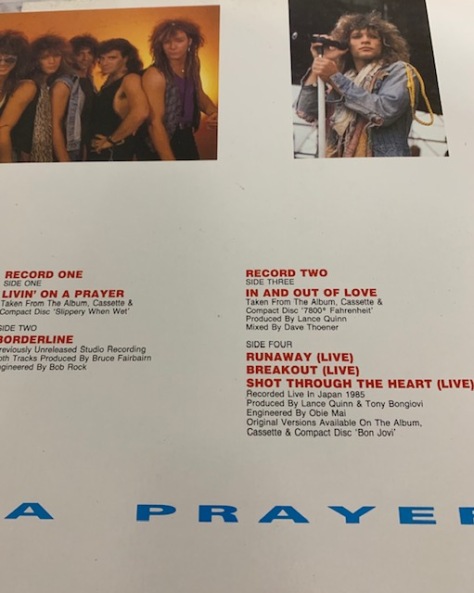 Record One has, of course, Livin On A Prayer which we all have heard but the cool thing is there is Borderline which didn’t make the cut and was left off the Slippery When Wet release.

Borderline I had never heard up til I picked this up. It’s an ok track as it’s awash in a mountain of keyboards. The chorus is good, but I can see why it was left off the original release.

Put it this way. Slippery had 10 tracks on the album! Borderline would be the 11th best track on Slippery.

Record Two has what I would consider the best track from the 7800 Fahrenheit album that being In And Out of Love.

Then the cool stuff which is 3 live tracks from the self-titled Jovi debut recorded in Japan back in 1985  in which you hear these guys becoming a serious live act!

This is an excellent addition to the collection and was a well put together set pushing the huge mega-selling Livin on a Prayer single at the time!