Hey, Folk’s For this review I’ve teamed up with Kick Axe Guru the one and only Mikey Ladano who over the last few weeks has scored every piece of Kick- Axe recorded material possible!

Click Mikey’s link below and check out some total fantastic reads on a band that should have been waaaaay bigger but got fucked over by shady music business stuff!

When the Community Auditorium opened its doors in Thunder Bay back in October of 1985 Kick Axe has the distinction of being the first-ever band to my knowledge to take the stage there!

Kick Axe released the brilliant Vices debut in 1984 and swung around the States that year opening for Judas Priest and Dio while 1985’s followup Welcome To The Club was a pretty decent album in itself!

So with that in mind and being 18 years young back then it was a no brainer to buy tickets as Kick Axe was trending in the upward position as the kids say nowadays!

Tbone was onboard to checking this show out as were a few other jokers we went to High School with at the time. Keep reading!

Kick Axe played to the crowd that night which thinking back the Auditorium was about half full (600 people) for Kick Axe which for this town was a pretty decent turnout.

I still remember lead singer George Criston running all over the stage barefoot-like no one’s business yet delivering the goods vocally! Song played that night, of course, featured about half of the Vices album( On The Road To Rock/Vices/Heavy Metal Shuffle/Alive and Kicking) while the recently released Welcome to the Club had a bunch that was played like the title track Welcome To The Club/Feel The Power/HellRaisers!

HellRaisers really stands out as a memory as the Auditorium staff was nervous about a bunch of metalheads coming into their productive little environment. The crowd was sitting down, for the most part, until George said “Why don’t all you Hellraisers come on down to the front!’

Bam that was our cue. We were a little ways back in the crowd but sure enough, these other guys that we noticed from our school headed down to the front before we got there and you could see the nervousness in the suits that were doing security that things might get goofy. I recall one of the security guys telling one of the dudes we went to school with to put out his smoke. The dude told security ‘Fuck You!’ and they left him alone!

Nothing happened, and to this day that’s the typical deal with that place as they are stuffy as fuck! It’s not a concert environment. Sure it’s an excellent sounding building, and I will agree that Alice Cooper sounded fantastic in there last year, but that place for some reason sucks the life out of rock audiences.

Kick Axe though showed up and gave it there all that night which considering they could have totally canceled this date as I will explain right now.

This show is memorable for a couple of reasons.

1- The night before in Winnipeg. Kick Axe had all their gear confiscated by the RCMP right off the stage due to shady business dealings by there manager who fled the country to avoid criminal prosecution. The show must go on so Kick Axe rolled into Tbay and played the show on pawnshop gear! The pic below is from the Winnipeg show the night before(January 15th, 1986) with the cops being the Strong Arm of the Law! If you notice below, there’s George barefoot, so at least the RCMP couldn’t take his shoes that night! 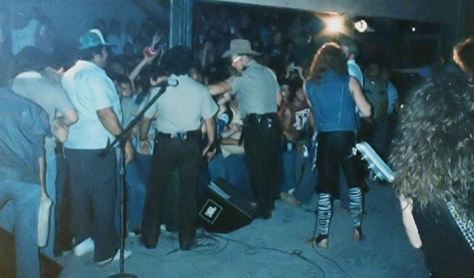 2- Kick Axe after the Tbay show canceled the remaining 7 dates of this tour because of the issue in Winnipeg!

You have to hand it to Kick Axe who I’m sure were totally deflated as their manager bolted and the cops seized all their gear! But what I can tell you is that they didn’t let it hamper there performance as no one knew in the audience any difference!

I have to thank the Kick Axe fansite for some of this info and pics https://kickaxe.wz.cz/main.htm

Also, have to thank my Good Pal Tbone who I had to get some help on remembering this show on memory as there was absolutely zero press on KICK AXE here in Thunder Bay!