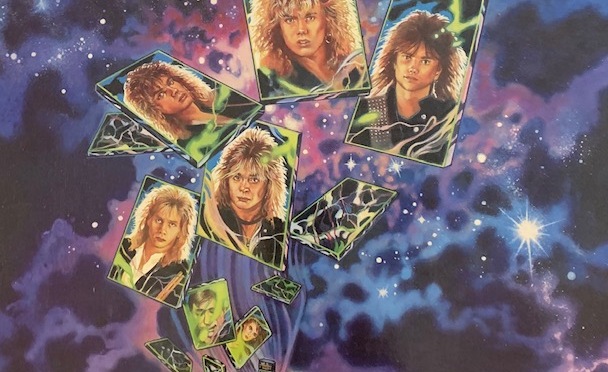 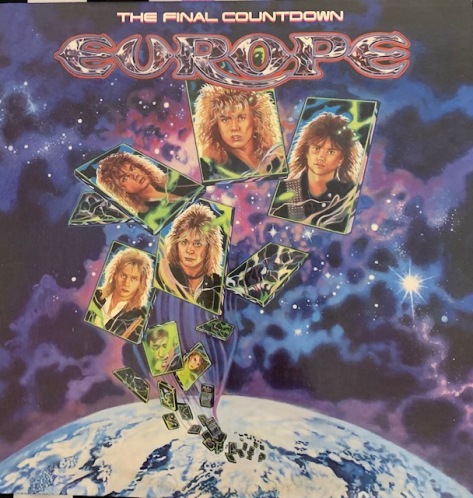 Ah yes, the time has come for Europe The Final Countdown to be featured here at Arena Rock!

So a few years back I somewhat reviewed this album via Joey Tempest singing into that Heinz Ketchup Bottle in the video of Rock The Night which is a great track. But the power of video footage back in the day(1986) ruined me as that became a running gag between me and Tbone at the time!

But a funny thing happened a few years back I rediscovered these guys about 4 years ago when Tempest and crew released War of Kings which was a phenomenal hard rock album stepped in all the right things U.F.O and Deep Purple!

Check out Wolves from the Walk on Earth album. You never heard Europe sound like this! Brilliant album! Add in the fact that Europe has had Dave Cobb produce the last 2 albums is one friggin slick move.

But I’m getting way ahead here.

So this album drops.  The Final Countdown video is everywhere and then some. The girls in my Highschool go all mushy over the power ballad Carrie when it was released. Then the whole Heinz ketchup bottle fiasco in Rock The Night seals my fate in not wanting this album.

(One fellow at my highschool did record this for me on cassette, but that’s kinda cheating. I will get to the songs eventually here. Bare with me!)

1988 and here comes the follow up to The Final Countdown in the shape of Out of this World which my younger brother Todd bought on tape! I borrowed it. Wasn’t that bad but didn’t grab me, so I ignored it as I did with all their other stuff until 2015!

Fast Forward to the Present:

So a few weeks back I was in my local Used Record Shop(Moon Money Vintage) and one of the few times I was about to leave empty-handed when the owner said If I wanted to, I could check the 7 or 8 albums before they hit the bin that she had sitting on the counter. There was a couple I was on the fence about, but there it was staring at me for $5.00 Canadian!

Time to take the plunge seal the deal and grab it! Done Deal and out the door, I went!

Am I going to go track by track? Meh. I mean opener The Final Countdown has been played to death so much with that opening proggy swirl of the synth that I now lump it in with the Livin On A Prayer tunes of the world that I’m ok if I never hear them again! Great songs don’t get me, wrong friends, I’m just burnt out on those tracks! 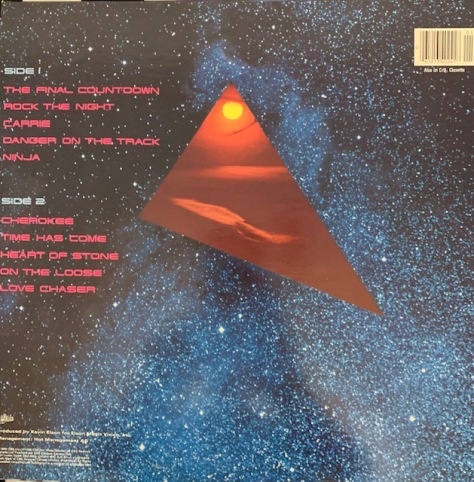 But I will tell ya the rest of the album is a pretty decent spin in a High Techy big Production Rock Sound on how you do go about producing a significant mid-1980s Album!

Kevin Elson tweaked the production dials on this album. Kevin produced those big selling Journey albums in the early ’80s like Escape and Frontiers, so Kev-Boy knew the angle of making rock records sound good on radio!

Europe and Elson made a hard rock album that when you take out the two songs that I talked about earlier is a pretty good dabble of slick catchy tunes none more evident than Rock The Night!

Now take away the goofy vid for Rock The Night its actually a perfect track!

Kudos to Keyboardist Mic Michaeli who kinda dabbles with the Jon Lord like Hammond during the chorus! John Norum plays a heavy yet melodic rock solo that sports all the flash n dash guitar hero’s of the ’80s but John never steps outside his boundaries!

Danger On The Track does feature that 80’s synth, but Norum takes matters into his own hands and rips down another significant lead. This song features one of those choruses that stick with you for hours after. Ok, maybe not hours after minutes at least.

Cherokee! Yep I love this track. Perhaps my fav from this album! Check out these lyrics below!

They lived in peace, not long ago
A mighty Indian tribe
But the winds of change
Had made them realize, that the promises were lies

The white man’s greed, in search of gold
Made the nation bleed
They had lost their faith
And now they had to learn
There was no place to return
Nowhere they could turn

Whoa! Like, look what Joey did there. Got all socially conscious and follows it up with a catchy chorus and a fandango good time solo by Norum! Winner Winner Europe gets the chicken dinner! ^^

From there Its some pretty slick hard rock tracks like Ninja/On The Loose. Groovy slick tracks like Time Has Come/Heart of Stone and album ender Love Chaser!

The Final Countdown album that once you take out the played to the death title track and Carrie is stuffed with polished hard rock gem’s.

In saying that about it being polished yeah it is but at least with the polish, Europe could back it up with the tunes!

^I thought it would be cool to feature some Live EUROPE from 1986 than to feature the actual videos of the songs which may taint my image once again if I see a Ketchup Bottle! haha

^^ Pretty impressive that its the same 5 Europe dudes in the band in 2019! Not any of this revolving door bullshit by many acts! The fact that 3 Decades have passed and it’s the same band that’s a testament as well! 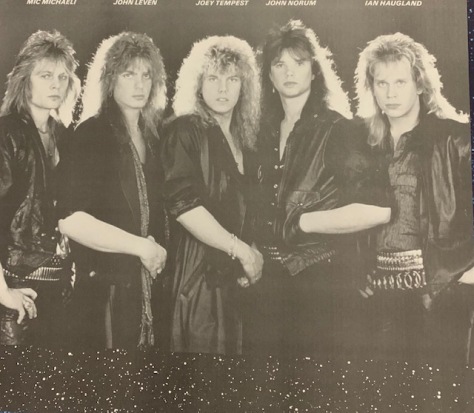