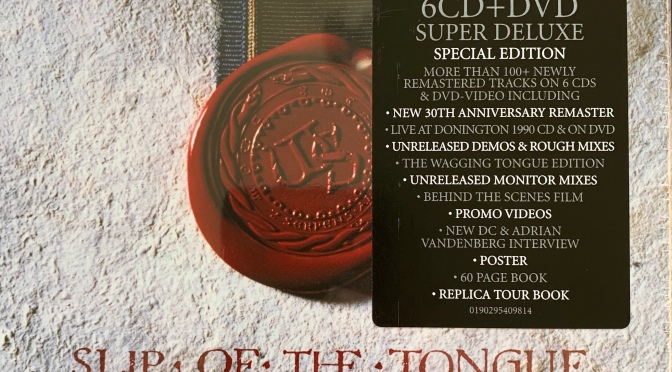 You got to hand it to David Coverdale as he knows the deal in how to reissue a previous release by going all out and delivering the goods in a box set!

Like the two previous box sets that David had released before this latest reissue (30th Anniversary of the John Sykes guitar-driven reissue of the 1987 album in 2017 followed by the 35th Anniversary of Slide It In released earlier this year) Whitesnake, this year alone has delivered two box sets and a new studio album as well!

That’s a pretty impressive amount of product released in 10 months!

About 2-3 months ago the one and only Mikey Ladano set social media afire from the safe confines of Ladano HQ when he sent us all the prerelease info on Slip of the Tongue. Fellow pals HMO and John Snow were onboard quicker than you could say ‘Tawney’.  I commented with ‘Meh!’

It took a millisecond for Mikey to fire back a response going “What!?’ My response was I’m not interested in hearing all that wacky guitar shit Steve Vai did on Slip of the Tongue. ( Love Vai with Roth on the Eat Em and Skyscraper releases) Mikey commented on the previous box sets on how well they were done than a moment of clarity entered the back regions of my noggin.

I thought about all the Unreleased Tracks/Demos and man how much I would miss not hearing Kittens Got Claws again after 30 years.

30 years is a long time man. 3 decades worth of days/weeks and months as time waits for no one. Maybe after all this time perhaps maybe I could go back down into that rabbit hole known as Whitesnake 89 and give it another go as I had reviewed the Slip album a long way back and filed it as 3/4’s Filler!

Time can change the listening habits of judging for that matter of what your mind was thinking about at that time and in this case, it was 30 years ago that Slip had been recorded and I liked some of this album but not all.

Would time change that?

Once I clicked preorder I thought it would be cool to hear the songs in the early stages of demo form with Adrian Vandenberg who co-wrote the album with Dave and as fate would have it Adrian mangled up his hand and enter in Steve Vai.

Now about that for a second. How about a conspiracy theory comment open for debate.

1989 John Sykes releases the excellent Blue Murder album and it supposedly got buried by Geffen records as both Sykes and Coverdale were on Geffen and supposedly David would not release the master tapes of ‘Slip’ if Geffen supported Sykes. Who knows if this was true or not but considering there was a ton of bad blood between John and David and with ego and money on the line I could see it happening.

Vandenberg being a pretty decent six-stringer himself is no John Sykes so do you think someone at Geffen (maybe John Kalodner) approached Vai thinking the Slip album needed some star guitar firepower to push the album forward in sales and the deal was Vai could self promote himself as well as Steve had  released Passion and Warfare during his time in Whitesnake!

I could be way off track here but it was fun to toss it out there.

Now back to the Box Set!

Look at all those tracks folks! 6 CD’s worth of songs which Dave as he always does leaves no stone unturned in regards to this album

Discs 3,4 and 5 are the deal for me. Songs in an earlier incarnation. Demos/Jams and the sound is excellent.  Coverdale even tackles Burning Heart which was the biggie single from the self-titled Vandenberg album(1982).

The Granny House stuff on Disc 5 is brilliant in their demo form. Now I’m Gone is the best version I heard before it got all polished up for public consumption.

I read in the accompanying book that Slip of the Tongue was originally going to be called Liquor And Poker! They even had a song written as Liquor and Poker as well. Parking Ticket/Kill For the Cut as well as a bunch more outtakes as you really get to hear how the sound of Whitesnake was before Vai came aboard. To be honest I prefer the Vandenberg approach to these songs as he’s no razzle and dazzle on the fretboard. Keeps it simple yet catchy.

Like David has done on his other two previous reissues. Make it your money’s worth. Included is a 60-page hardcover book documenting this era of Whitesnake( 88-90) as well.

Has my mind changed on the actual studio album that we all heard?

Jury is still out! I haven’t even relistened to it yet. I’m too busy getting through the other discs but I will make it back to Disc 1 eventually!

To be honest I’ve been digging into the tracks on the previously mentioned discs which have given me a new sonic perspective on this album as a whole!

So well done. Bravo, David and the real treat for me was my daughter Lauren gave this mega Box Set to me as an early Birthday Gift!