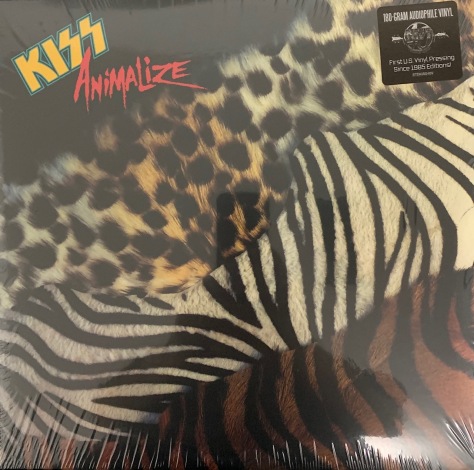 I was watching some clips on the Tube of You recently and KISS is doing these KISS Cruises and they get a bunch of bands and they do shows and whatnot on the high seas.

Bruce Kulick as you know was KISS’ lead guitarist from 1984-1996 and was a team player if there ever was one.

So on these cruises, KISS has invited Kulick to put together a band and Bruce plays the stuff that KISS themselves ignore now and I have to tell you that Bruce and his band do a phenomenal job on the songs from the ’80s into the early ’90s.

Anyways to make a long story shorter I watched as Bruce and his band ripped through a medley of KISS classics from 1984’s Animalize album.

That got me thinking about doing a revisit with this on the album as I picked it up this past March and really found a whole new appreciation of it. Course it sounds better on vinyl than CD!

Changes were on tap for KISS in 84. Vinnie Vincent(guitar) was sent packing and was replaced by Mark St John(RIP) who was first and foremost a shredder which when you think about it that’s where guitar playing was headed into the mid to late ’80s.

KISS in 1984 was in no man’s land at the time. There they are after some lackluster sales of there early 80’s output (The Elder and Creatures of The Night) and finally found a resurgence with 1983s Lick It Up which gave them there first Top 40( in a few years) hit in Canada with the title track.

By 1984 though Gene Simmons and more importantly, Paul Stanley must have been wondering what do we do now in the 6 string department after Vincent got sacked.

Get another shredder as in 1984 guys like that crazy mo-fo Yngwie Malmsteen were starting to make noise with million notes per second’s which to be fair made me nauseous at times with that speed on the fretboard. Impressive but not my deal.

So Stanley and Simmons recruit St John and dump a bunch of tracks on his lap to see what he can muster up.

St John pulled off some good playing on here at being a hotshot but over the years Stanley has said that St John had issues in the studio at getting the solos out of his guitar that Paul wanted to hear.

I always found these remarks interesting as Paul wanted a shredder than didn’t want a shredder so let’s toss the shredder under the bus when he doesn’t do as I say.

Well, that’s how I understood it. 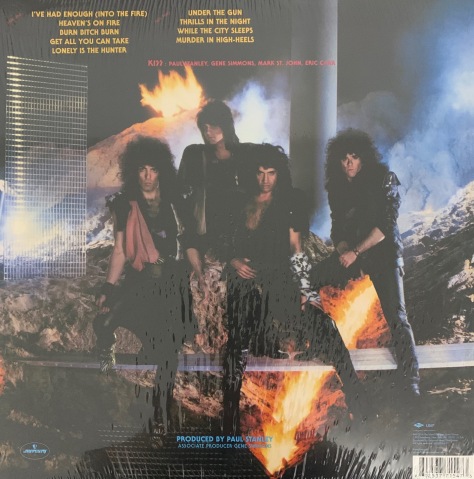 9 songs make up Animalize and its a pretty decent snapshot of KISS in 1984-85.

Opener I’ve Had Enough(Into The Fire) is a pretty decent opener where St John lifts off right out of the gate and KISS is off and running.

Heaven’s On Fire was the biggie single on this album and you know you’re up to something when all of a sudden Tbone is back on board with buying KISS cassette tapes which began with Lick It Up in 83, Animalize in 84 followed by Asylum in 85!

Let’s for a second call this the Tbone-KISS-Trilogy!

Easy peasy as each of those 3 KISS albums had singles! Tbone bought into the singles that KISS had mustered up. Lick It Up/Heavens on Fire and Tears Are Falling were the big tracks that helped push those KISS albums to Gold and Platinum. Gene and Paul should thank Tbone for his loyalty in the 80s when there was so much music being released!

Course Tbone had me babbling in his ear about this stuff as well so I think that was the reason more than anything.

Back To The Task At Hand..

Heaven’s on Fire was the SONG from this album that pushed sales and made Animalize the first KISS album to go Platinum in 5 years! It must have been a long 5 years for Gene and Paul to go Platinum.

Simmons has 4 tunes on Animalize and they are all quite good. Not as good as his songs on 82s Creatures release(or the Lick It Up album for that matter) but still pretty decent.

Burn Bitch Burn is Gene laying down the law of the jungle of big dumb arena rock which is always a hoot. Lonely Is The Hunter I like that sleazy Demon vocal in the pre-chorus that leads into the chorus! At times I just wanna yell “Ramsey” when Mean Gene is singing for his supper on these tracks!

While the City Sleeps which is track 8 is a phenomenal song. Great driving of the drums by Eric Carr(RIP) on this track. Great chorus/solo/everything its here man. A rocking rolling good time with a song no one ever talks about!

Murder in High Heels is decent Genie Gene song as well not as good as While The City Sleeps but still decent enough. Like that echoey voice during the chorus while the music is going all bonkers in the background.

The Stanley songs are good as well.  Paul hooked with Desmond Child and bashed out Heavens on Fire. Get All you Can Take is solid as well except for Paul’s vocals which he sings so high it’s no wonder he lip-synchs now! Under The Gun is a barn burner of a track with a ton of riffing underneath the double bass fury of Carr’s drumming.

The real money shot song on this album is Thrills In The Night. it has the trimmings of everything I loved about KISS back then. Stanley writes a song about a nice girl by day. Sleazy hooker chick by night! Bingo just the song we were looking for in 84!

The real deal of Thrills In The Night though is the solo laid down by St John. St John nails that wang bar like he’s the Boss and does all that crazy-ass tapping but fuck its brilliant! Brilliant when I first heard it in 84 still brilliant in 2019! Shredder St John wails on this one folks! Actually, I think its the best solo on this album!

As I mentioned earlier Paul was frustrated with Mark and brought in future KISS guitar guy Bruce Kulick to solo on Lonely Is The Hunter and Murder In High Heels! Back in 1984  I never knew this but nowadays its common knowledge about who did what on KISS albums!

St John got bad arthritis in his arm and was replaced by Kulick but I think the writing was on the wall for St John bad arm or no bad arm. It just made Gene and Paul not look so bad when they turfed St John to the curb.

Sadly, half the band that recorded this album has passed on!

Animalize over time is still a pretty decent spin. The production by Stanley is ok not as good as how Creatures sounded but still a decent sounding record.

The songs are good tunes. The playing is 1984 sounding. Shredder Guitar, Double Bass drumming and Starchild trying to blow out his voice! ( that comes a few decades later).

KISS was big news again in 1984/85 as they were in all the magazines out at the time and by most accounts, the shows were well attended and most importantly Tbone bought into what Gene and Paul were selling and at the end of the day that’s all that matters!

A decent revisit and one that I can still put on periodically and enjoy when I don’t want life to be taken too seriously!