When one thinks of stellar debuts The Hips ‘Up To Here’ would have to be one of them.

Up To Here dropped in the Summer of 89 when I was in Winnipeg with Tbone to see a concert. Whenever we hit Winnipeg we always hit all the record shops. One such visit under the New Release section was Up To Here the debut from fellow blogger Geoff Stephen’s back yard of Kingston Ontario, “The Tragically Hip”

When I saw the cover of Up To Here I called Tbone over and showed him it. Just 7 months earlier(Feb-89) we saw The Hip play to a crowd of 20 people here in Thunder Bay at Crocks and they tore the place apart.

I still remember buying there 5 song EP on cassette from one of the guys in the band ( I can’t remember who) for $5 and whichever Hip guy it was thanked me for the gas money to get to ironically Winnipeg!

So there we are in Winnipeg a few months later as me and Tbone both bought Up To Here on that hot August day.

I bought it on CD and Tbone purchased his copy on tape. Don Smith who dialed in the sounds basically let The Hip do there thing!

Up To Here is 11 Songs of Barroom Boogie Rock. Smith kept the production raw which is what is so endearing to you as a listener. It sounds live with hardly any touch-ups may be no touch-ups as the guys in the band were a well oiled traveling band honing those chops in towns across Canada and this album pays off that in spades.

The songs are catchy plain and simple. Blow At High Dough launches the album off in fine style as Lead SInger and Lyrcist Gord Downie already drop the gauntlet on what a fine talent he has with words.

Want a couple of examples of some classic lyrics?  How about the cool acoustic-driven slip n slide guitar work of the brilliant Bobby Baker on the tune that leads off SIde 2 Boots or Hearts that features some fine words, 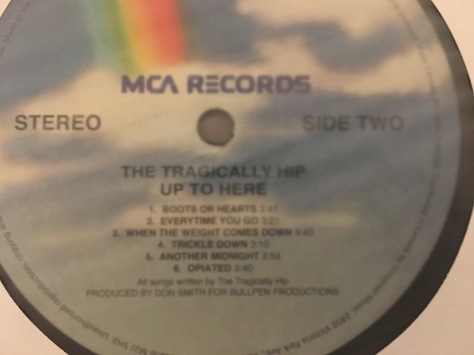 Course Gord had the knack of an impact line like the song that follows Boots or Hearts  which is Everytime I Go with the money shot opening line of,

Drove a Plymouth Shallow Grave
Said, “My girl don’t just walk, she unfurls”
With motorcycle language
He stumbled through his slang pledge
Then he dragged the mud for wedding pearls

Crazy good that Mr. Downie was and what a huge loss when he passed in 2017.

As I mentioned earlier this band is tight live and on this record. Smith let these guys loose and it shows.  The band itself is wicked. Paul Langlois comes from the Keef cool Rhtym Guitar Academy. Paul’s rhythms are tighter than the bolts on a bank safe. Drummer Johnny Fay and Bassist Gord Sinclair anchor the back end of the band brilliantly. Bobby Baker plays all kinds of rock guitar on this. Straight ahead rock leads ( I Believe In You) slide guitar (Blow At High Dough) more cool rock leads (She Didn’t Know).  How about Bobby’s ax manship in New Orleans Is Sinking? The list is endless.

The Hip as you all know was mega in Canada. Look no further than there Canadian sales. The first three Hip releases (Up To Here, Road Apples, Fully Completely)  each sold a million copies in Canada.

To my American pals out there reading this if this was American sales the three Hip albums would have sold 30 million combined! How’s that for a 3-pack of album sales to start your career?

The first three Hip albums were certified Diamond in Canada. I don’t think any other artist or band in Canada will ever pull that feat off.

This is a great record plain and simple so yeah go ahead drop the needle or stream it and crank Up To Here.

You can thank me later!

I was in Montreal(with Tbone) a few weeks after Downie had passed and I was on the vinyl hunt for some Hip and was able to score Up To Here and the followup Road Apples at a cool little record shop called Beatnick Records.