Rudy Sarzo as we all know was the Bass Player in Quiet Riot and Whitesnake but has also bounced around in other various acts throughout his 40 years of Slappin da Bass when the Cuban born Rudy ended up in Los Angeles and hooked up with a six-stringer named Randy Rhoads.

Off The Rails was written by Rudy himself and is basically the story of him meeting Randy, joining him in Quiet Riot in 1978. When Q.R could not get arrested with a North American Record Deal things fell apart.

Randy than left Q.R and joined the Blizzard of Oz in England where Rhoads recorded the debut album with Ozzy.

When Ozzy made band changes in 1981 Rhoads was the one who put out the call to get Sarzo in the band. Rudy auditioned and got the Ozzy gig and this is where the story takes off.

The book is written like a Diary. Day by Day, Month by Month as Rudy tells the tales of the Osbourne band on tour in the early days.

What is pretty interesting is everyone knows how iconic the Blizzard of Oz and Diary of a Madmen records are now. But back in 1981 when the North American Tour started some shows were packed where many also were sparsely attended.

People were focused of course on Ozzy who already had the rap of biting off a doves head at a Jet Records meeting so that tag line followed the band throughout the first part of touring the States.

Throughout the book, during this time Ozzy is lost in an abyss of booze and drugs in which his manager and soon to be wife Sharon tried to keep him from. It only got worse in 1982 but more on that shortly.

Rudy throughout the book posts actual reviews of those earlier Blizzard shows. There are more than a few Music Critics who thought that Bob Daisley (Bass) and Lee Kerslake(Drums) were still in the band playing the North American shows whereas it was Rudy and Tommy Aldridge(drums) who were in the band at that point as Kerslake and Daisley were fired a few months earlier.

That is called not doing your homework!

Off The Rails is a fitting title as Ozzy was indeed off the rails personally at the time in the early 80s as his marriage was crumbling apart and he just couldn’t kick booze and drugs.

Aldridge/Sarzo and especially Rhoads were super chill as Ozzy was whacked off his rocker most of the time. Yet the band kept on touring and then on March 19, 1982, it really took a turn for the worse when Rhoads and two others perished in a plane crash which Sarzo writes in the book that Rhoads asked him to go with him and Rudy said he was too tired to get on that airplane.

In the book are all the affidavits of the witnesses of the plane crash.

Ozzy, of course, went right downhill after yet as all the band and crew wanted to pack it in it was Sharon who kept the Crazy Train on the tracks. Bernie Torme as we all know filled in right away but couldn’t deal with it as he was trying to get a solo album finished at the time. So he was there and gone quickly.

John Sykes was almost brought in but Sykes manager wanted too much money.

As everyone knows Brad Gillis stepped in and took over on guitar and Brad can be heard on Ozzy’s Speak of the Devil album. Upon its release, Rudy called Sharon and told him he was quitting.

Speaking of the Speak of the Devil record. It was supposed to be recorded with Randy. What I didn’t know was it was supposed to be all Sabbath stuff with Randy on guitar and the original plan was for the record to be recorded at Toronto’s Maple Leaf Gardens! Randy was opposed to recording a double album of Sabbath tunes as Ozzy was in a pissing match with his ex Sabbath mates at the time. Speaking of pissing this was right around the time Ozzy urinated on the Alamo.

Randy grew tired of the shenanigans and told Ozzy he would do two more records(one live and one studio) and one last tour and that would be it.

Needless to say, Ozzy wasn’t happy and it led to more friction.

One guy that was really wild to read about was Marq Torien. Who is Marq Torien you ask? In the late ’80s Torien was the lead singer of the Bullet Boys but back in 82 Marq played at an audition with Ozzy and impressed Oz so he sent Torien to Sarzo and Aldridge who jammed with him and in no time told Ozzy there was no way Torien could play or handle the Rhoads stuff.

The Torien stuff is what makes these books interesting. Those little known facts that you have no idea that even took place.

As Sarzo puts it. He joined Ozzy with a phonecall and quit Ozzy in a phonecall from Sharon.

I remember reading in Circus Magazine back in the mid-80s that Ozzy sucker-punched Sarzo backstage at an outdoor show when the two met face to face.  This indeed happened as Ozzy was still pissed that Sarzo had quit.

But by the mid-90s Oz, Sharon, and Sarzo all mended their differences and put the past behind. Sarzo does write about it more than once that if it wasn’t for Sharon and Ozzy, Rudy would have never got a career going.

Off The Rails is a great read as you get a glimpse of what it was like touring in a new band with an out of control lunatic at the mic (lol).

It’s like if I wrote this book myself. By that, I mean the paragraphs at times look off-center as well as spelling mistakes throughout which I even picked up on. Just the simple things really. Where was the Editor in all of this? Rando, another Bass Player should read this book, and let’s see if he has the balls to point out these writing flaws to his fellow 4 stringer Sarzo!

Little Sloppy but than again it’s like reading my Blog! Ha! 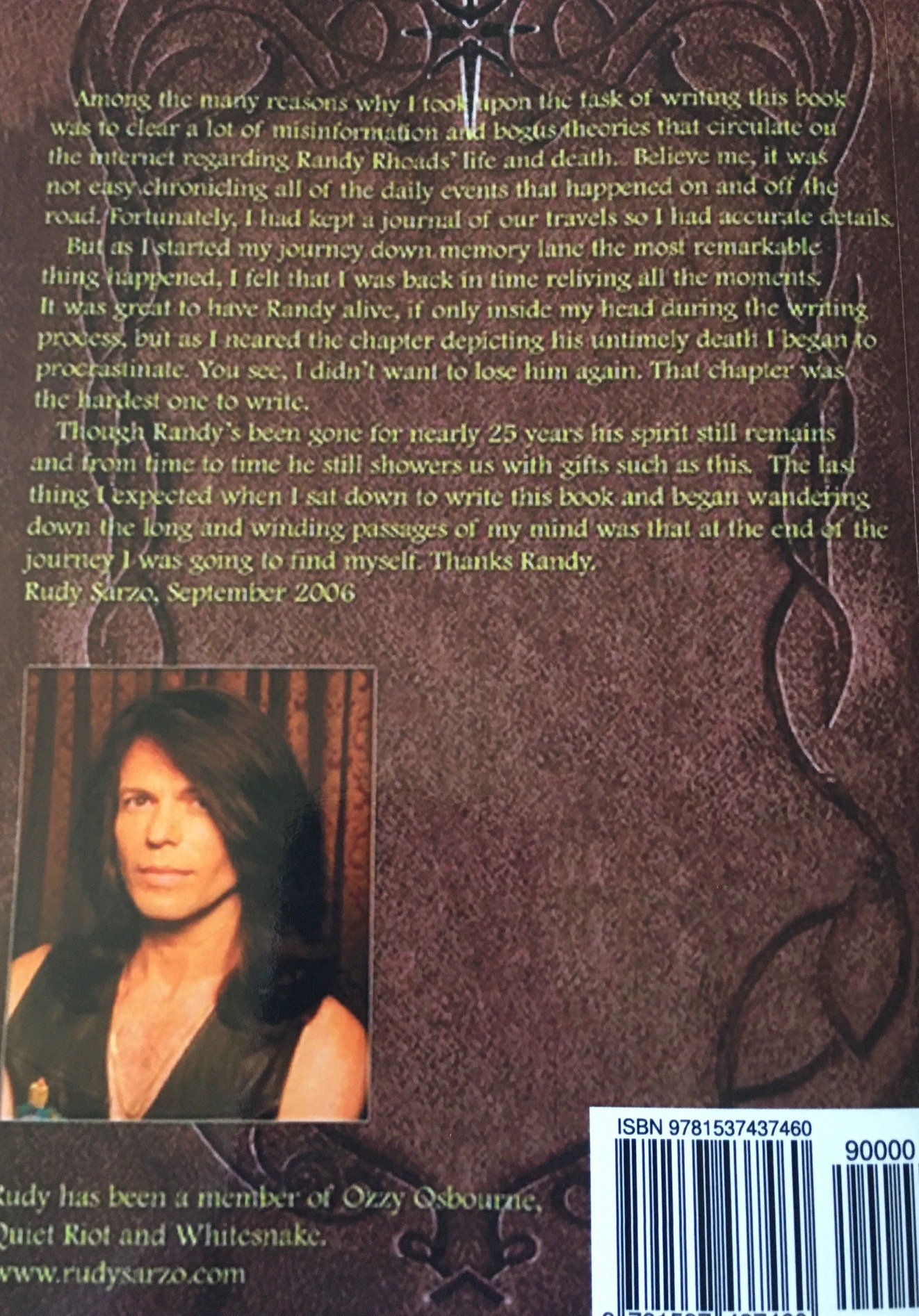