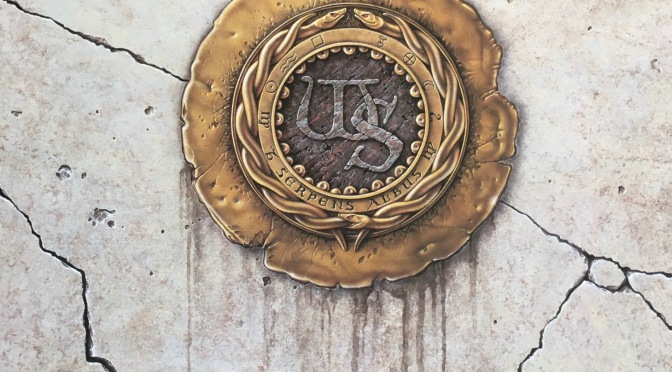 One of the biggest Summer Spin back in  1987 for me and Tbone was cranking Whitesnake 87 on cassette tape (Loud) in Tbone’s car!

A&R Guru of the times John Kalodner made or quite possibly told David Coverdale to get rid of the old looking guys and streamlined Whitesnake into firepower 80’s hard guitar rock band courtesy of John Sykes!

Sykes and Coverdale cooked up a batch of massive songs. Sykes muscled up the sound of Whitesnake so the 87 record slammed onto the music charts throughout the world head-on.

Opener Crying In The Rain steamrolls with huge riffs and huge drums courtesy of Ansley Dunbar. Coverdale howls like a wolf at the start of next track Bad Boys and this is where Sykes gets right down to business as he blitzes his way through a firewall of epic riffing and soloing.

The sonic barrage continues with Still of the Night. Bit Zep. Bit Whitesnake and a whole lot of muscle behind the music.  This song cooked in 1987 and still cooks in 2020.  What else can you say about a tune that features a wolf sniffing around one’s door!

Here I Go Again is still played today on commercials etc and is the one track to feature Adrian Vandenberg playing the solo while Sykes was told to take a hike. Give the clip I posted below a listen. Mind-blowing good drama coming right from Adrian’s mouth himself!

That clip with Adrian and Eddie Trunk was great as Eddie sounded like he was about to shit himself with excitement. considering this happened 33 years ago!

So there ya have it Adrian lays down the solo and Coverdale already had booted the band out the door.

But we must not forget there is a Side 2.

Gimmie All Your Love Tonight lifts off right out of the gate and is a great straight-ahead rocker. Is This Love is the ballad that got a ton of radio play and perhaps pushed this album in the sales department a little further as all the soccer moms were digging in on what that old Snake Charmer was going on about lyrically on this song.

Sykes cranks his amps to 11 and soars with Children of the Night. Another bonafide winner as  87 proves that the album is still strong throughout meaning there is no drop in productivity on Side 2!

One of my favs on this record Straight From The Heart is a real catchy song with a stellar chorus and Sykes as he does all over this record lays done yet another fabulous solo.

Don’t Turn Away ends the album. A song which I like better than Is This Love as the tempo picks up towards the end and ends 87 on a high.

What can you say about the 87 album other than David and John wrote one of the best hard rock releases in the ’80s It’s unfortunate that the bad blood spilled between these two has never been resolved.

Sykes has become a recluse at putting out records and you can’t blame him as he still maintains his full publishing off of this album which was perhaps the smartest thing he ever did.

I recently watched a Youtube video done a few weeks ago and Bob Rock was asked about John Sykes. Rock when talking about Sykes said two things that stuck out.

1-When Whitesnake was recording this album in Vancouver, Sykes had a hard time getting the sound he wanted to hear out of his amps as no could figure it out, Bob was asked to give it a shot as he was recording another band in the next studio so he went over and within an hour of moving mics and amps around got the sound that Sykes wanted. Rock says that led to them becoming fast friends and producing the first Blue Murder album.

2- Bob in that same interview said that Sykes is the best guitarist he has ever recorded.

^-for being a couple of knuckleheads back in the 80s we turned out alright I think!