The self titled album “Boston” sold million’s ,million’s and millions of copies in 1976.

It was  1981 and my pal John Young (Missing In Action) had the self titled Boston debut.  When I was at his place  I had seen the cover of the debut with the the saucer in space with that Boston logo caught my eye and when I flipped over the cover who is the dude with the fro?

So in the summer of that year it was off to Winnipeg with my family and two of my musical purchases were Santers “Shot Down In Flames” on vinyl and on cassette tape “Don’t Look Back” the followup to the Boston debut!

“Don’t Look Back” was released in 1978 and I guess you could say it was a continuation of the debut but for me being my first purchase of Boston, this one sticks to me for some crazy reason….

DONT LOOK BACK- Ah, there’s Tommy’s guitar and what a great tone and opening riff, and boom here comes the bass, drums some cool tambourine and Brad Delp’s voice! I Love the end of it when the big power riff ends the tune fades out and powers up again! This is a great opening number and if I was to do an Arena Rock Compilation disc this would be track one!

THE JOURNEY- Some doodling around with a spacey interlude that last’s all of one minute and forty seconds of it Spacey keyboards I guess you could say! 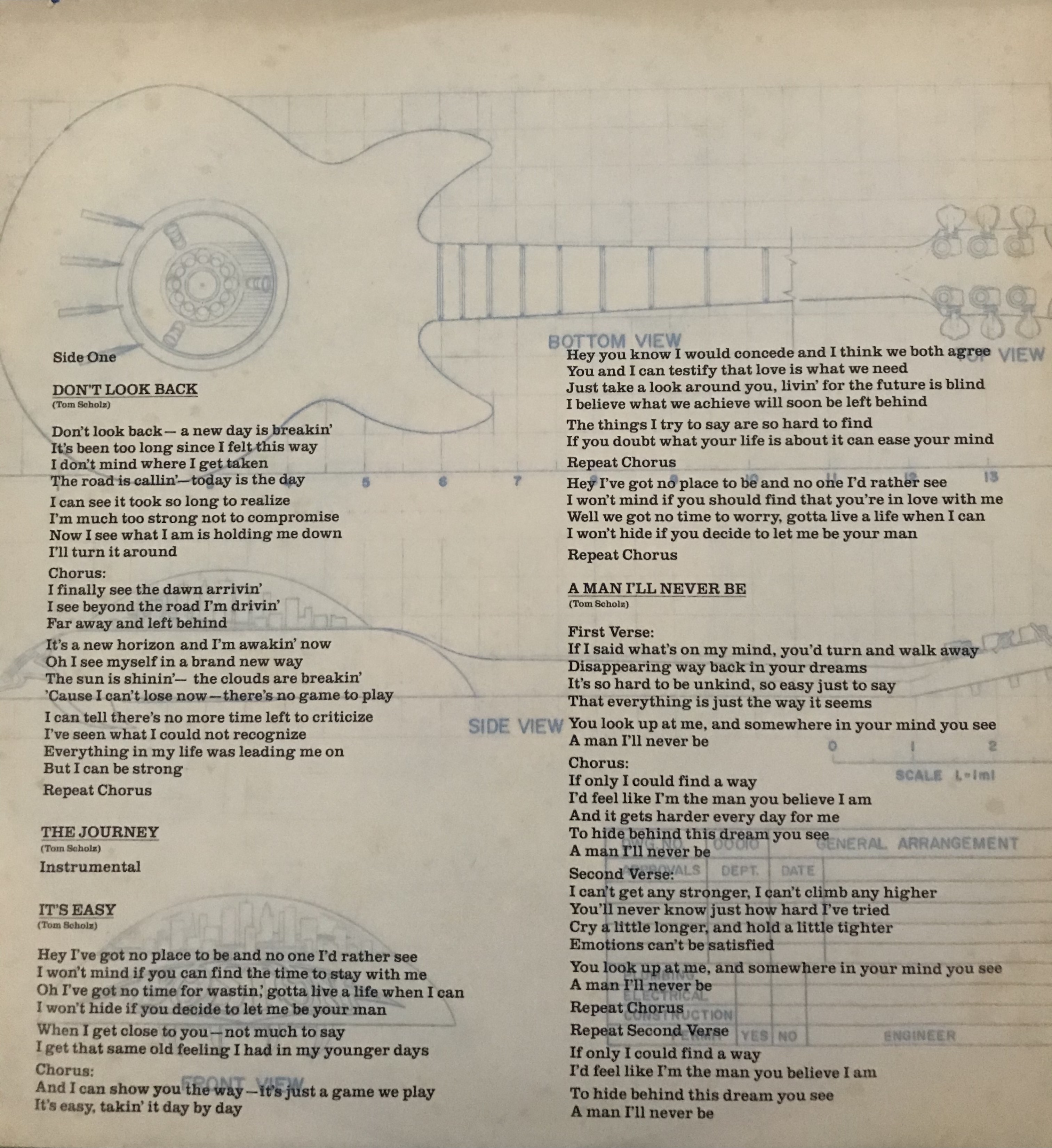 ITS EASY-A good straight ahead easy peasy rock track! Acoustic guitars mixed with the electrics propell this tune forward and it has a  quick little tempo changes and the vocals like Delp always does delivers it home!

A MAN I’LL NEVER BE-This track clocks in just under 6 minutes and this is epic Boston! The song is a good representation of there sound when they were firing on all cylinders in regards to big rock sounds!

FEELIN SATISFIED- Deke sez….’this is in my top 3 all time fav Boston tracks!” Yep what a great beginning with Delp of course and what a pre chorus. Love the guitar and the handclaps as Delp asks “Are you Feeling Satisfied?” And than right into the chorus!  This one is just soooooooooo good! Love the guitar and you know the rumour floating around is that Scholz did all the instruments on this album and Delp did the lead vocals! 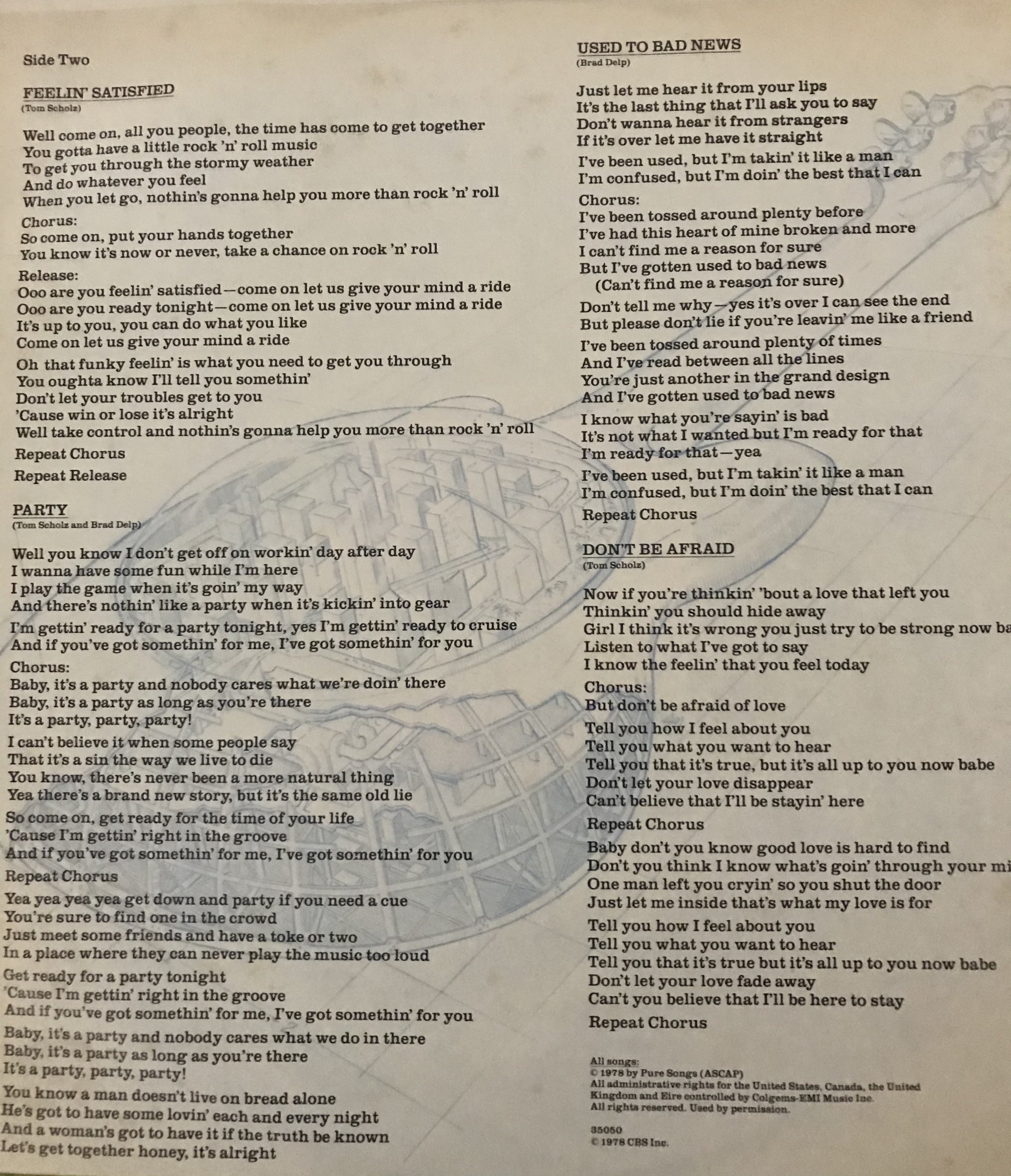 PARTY- Party is the brother to Smokin’ from the debut! Boston wants you to know that if your gonna get spaced out, get spaced out with them! The song is a feel good song as Delp delivers the vocals only like he can and Scholz cranks his guitar loud as it’s a Party. Love that riff during the chorus and after all is said and done it will be time for some late night  Smokin’.

USED TO BAD NEWS-Another mid tempo rocker and there’s a lot of it on this record acoustic but Sib and his drums (and his Fro )propel the song forward!

DONT BE AFRAID- Boston ends the album with one of these end of the album Gems! Big sound,big guitar,over the top vocals it’s all here just dial up 866-AOR-ROCK and have all things delivered to you sonically! This song just wants you to hear more and  it took 8 years of finally hearing more Boston when “Third Stage” came out in 86! 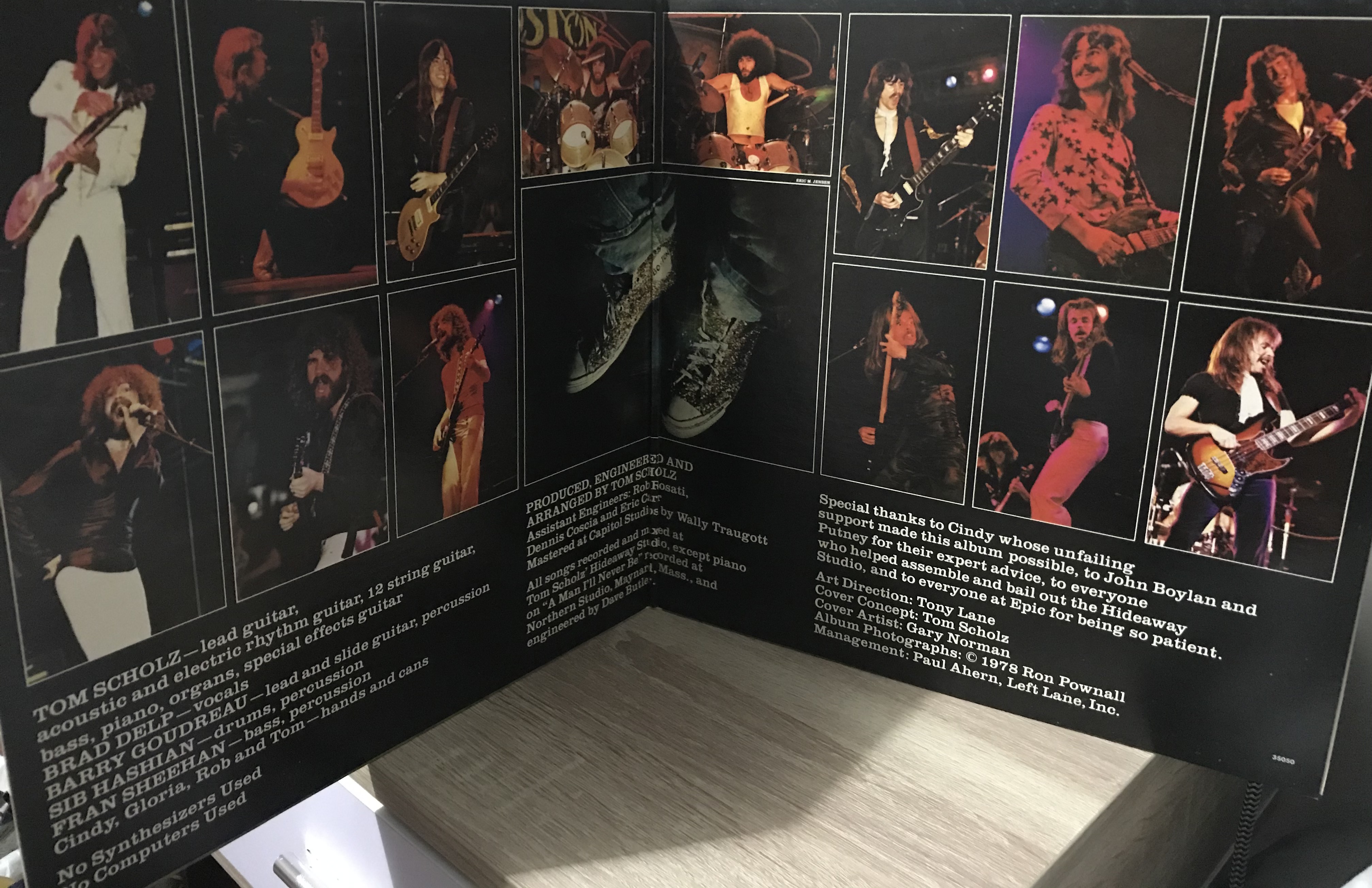