Ah, there you have it. One of the finest albums ever to come out of Toronto (well anywhere actually) and that is “Allied Forces” by those fine Canadian Gents known as Triumph!

“Allied Forces” I  purchased back in the fall of ’81 as it was that cover with the iconic Flying V that was calling and telling me as 14 year old that this album will ROCK!

It does indeed ROCK! From album opener “Fool For Your Love” to closing  track “Say Goodbye” there are no dips in the songs. In other words, no skipping of tracks.

You can play this album front to back.

Fast forward to this year…

It was announced back in April that Triumph would be releasing and  limiting a deluxe box set of “Allied Forces”  to only 1200 copies throughout the entire world for “Record Store Day” on June 12th.

June 12th came and they were all scooped up. I tried and no luck but Andy Curran ( whom we were interviewing that day ironically enough as Andy had a major hand in the piecing together this box set))  told myself and Mikey Ladano to sit tight and not pay ridiculous eBay prices which had the box set going for about $400 Canadian.

So we sat tight, waited and some dude commented on Ladano’s page that Rock Paper Merch had copies of this limited set available.

Mikey pounced right away and after a few days I got myself a copy as well and better yet my daughter Lauren said this is my early Birthday  gift!

Wowzers, what a great gift as I had this box set in my hands in four days. Great shipping!

So not only do you get an updated copy of “Allied Forces” (the original studio release) you get a ’10 inch 45 of the boys ripping out a unreleased version of “Magic Power” from Ottawa back in ’82.

The flip side has “Allied Forces 2021” which features Phil X who on guitar who as you all know replaced Rik Emmett back in the early ’90s.

Below is the cover of the 45 which is right in my pal  Teebone’s wheelhouse as he has always been a sucker for ladies on record covers! 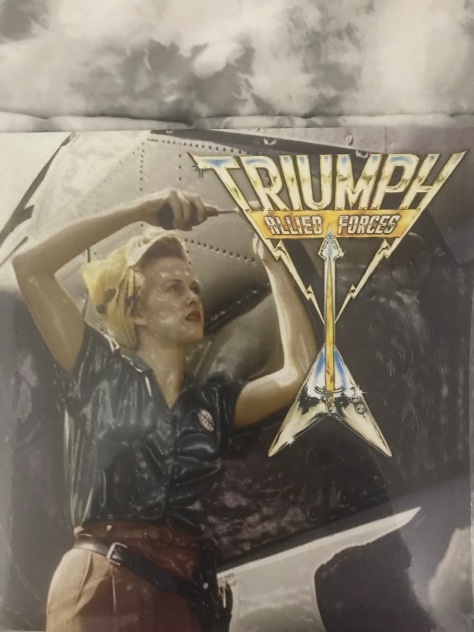 Rik Emmett, Mike Levine and Gil Moore did the right thing and let Andy Curran (who did a bunch of the recent RUSH reissue’s) dig through the attics of Metalwork Studios and pull together this magnificent looking box set including a shrunk down version of the tour book from the 1981 Tour!

Also included is a double live show recorded in Cleveland and the stage is where you hear how powerful the Toronto three piece Triumph really was in concert. As well what a stellar set list. 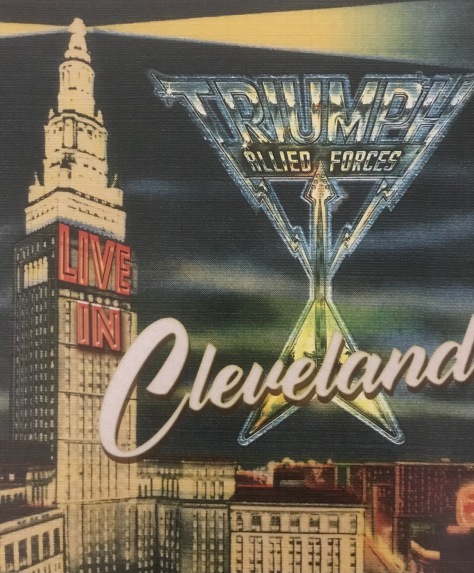 But wait there’s more. Included is an Rik Emmett guitar pic as well as couple of posters.

So take a bow Mr. Curran for taking on an enormous task of researching and putting together piece by piece a box set with the focus of a fans perspective put first.

Thanks to Rik, Gil and Mike for all the killer music included on “Allied Forces!”

Make sure you tune in this upcoming Wednesday night (Oct 20th) at 7pm when myself and Brent Jensen will focus our energies on the Rock N Roll Machine known as TRIUMPH!

You can watch live on my Youtube Page….Thunder Bay Arena Rock-Scotch On The Rocks