One of the releases that I really enjoyed about a year ago streaming was Coop when he dropped “Detroit Stories” smack dab in the middle of a pandemic.

I preordered “Detroit Stories” well before it came out but after it was released it took Amazon forever to get it so I cancelled the preorder. 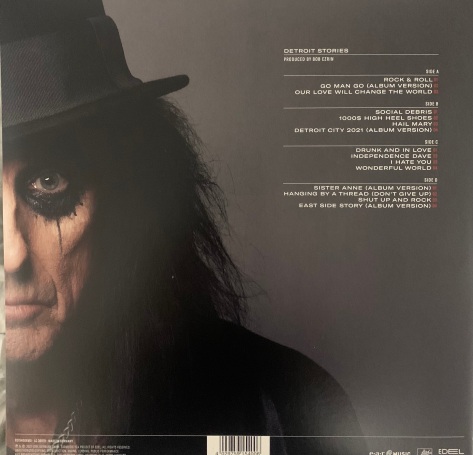 Recently I started listening to it again and just as how I dug it back in early 2021 I decided to look for it again and Amazon had it for a decent price so I pounced and ordered it on vinyl.

Detroit as you know is where Alice Cooper is from and along with his right hand man, producer Bob Ezrin they put together a very garage rock sounding record which is absolutely brilliant.

This record tells the tale about keeping the rock simple and direct. Coop even got his old bandmates from their 70s heyday to play on certain tracks. Basically a whose who from Alice’s past is featured along with even Joe Bonamassa (who plays on opening Lou Reed written kick ass track  “Rock And Roll” and also on the Coop penned “Drunk And In Love”)

Even cooler is Larry Mullen Jr as he did on Alice’s last album shows up and slams some drums on “Shut Up And Rock”.

Alice’s old bandmates show up as well as the MC5. All Rock, All Detroit.

I love this album as its stripped down. No polish amongst the tracks as Ezrin kept the sonics  simple.

Detroit Stories is 15 songs spread out over two albums filled with down n dirty rock. Amazing that the Coop is still pushing out product as he just turned 74 and he’s currently working on two more rock albums slated for release sooner than later.

Coop and Company did a great job on the packaging as well. Double vinyl, lyrics, credits and of course it all in comes in a gatefold sleeve!

Detroit Stories is a must own if you are a fan of stripped down garage sounding rock. I must also thank my pal, fellow blogger Jeff Japp from Cali who told me this album has to be played on 45 rpm!