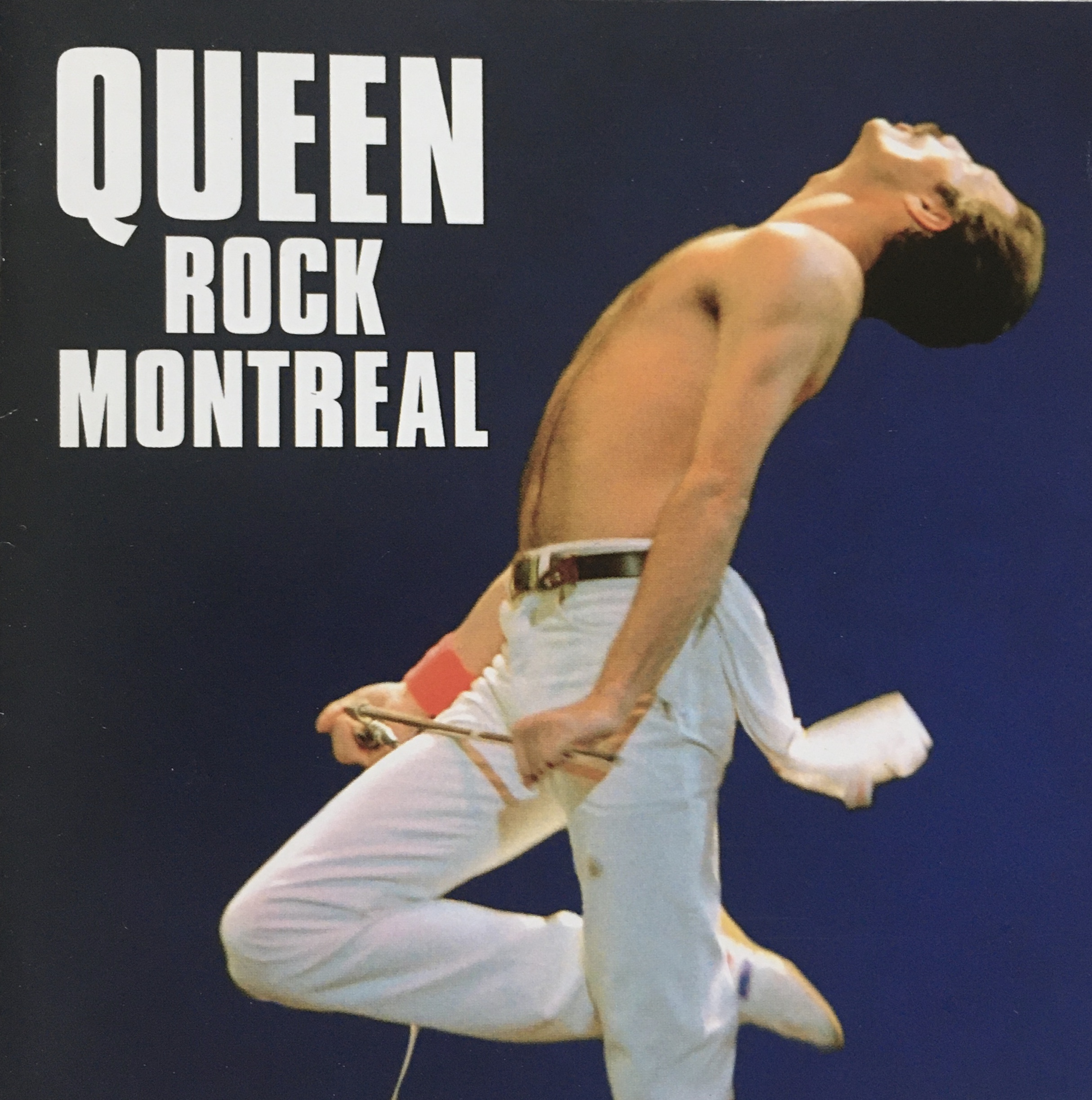 When I was live streaming with Mikey a few months back we had picked three albums that are basically game-changers in our world.

One of my three picks was “The Game(1980)” from Queen. So basically the day after our live stream I cranked up the fantastic live “Queen Rocks Montreal.”

Right from the liner notes of the two-CD set is the explanation below. 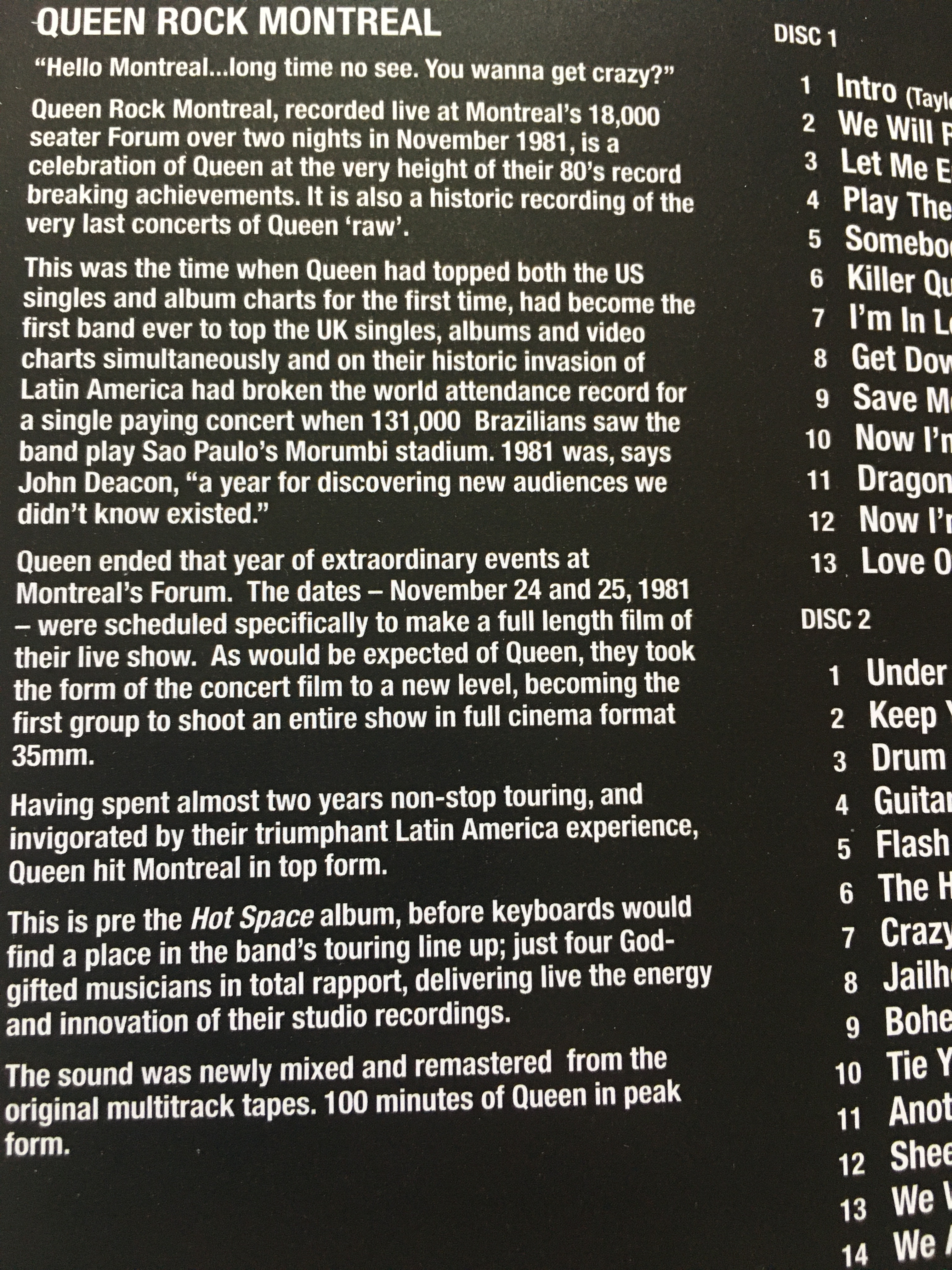 Even better is the setlist from the two shows that night in Montreal. 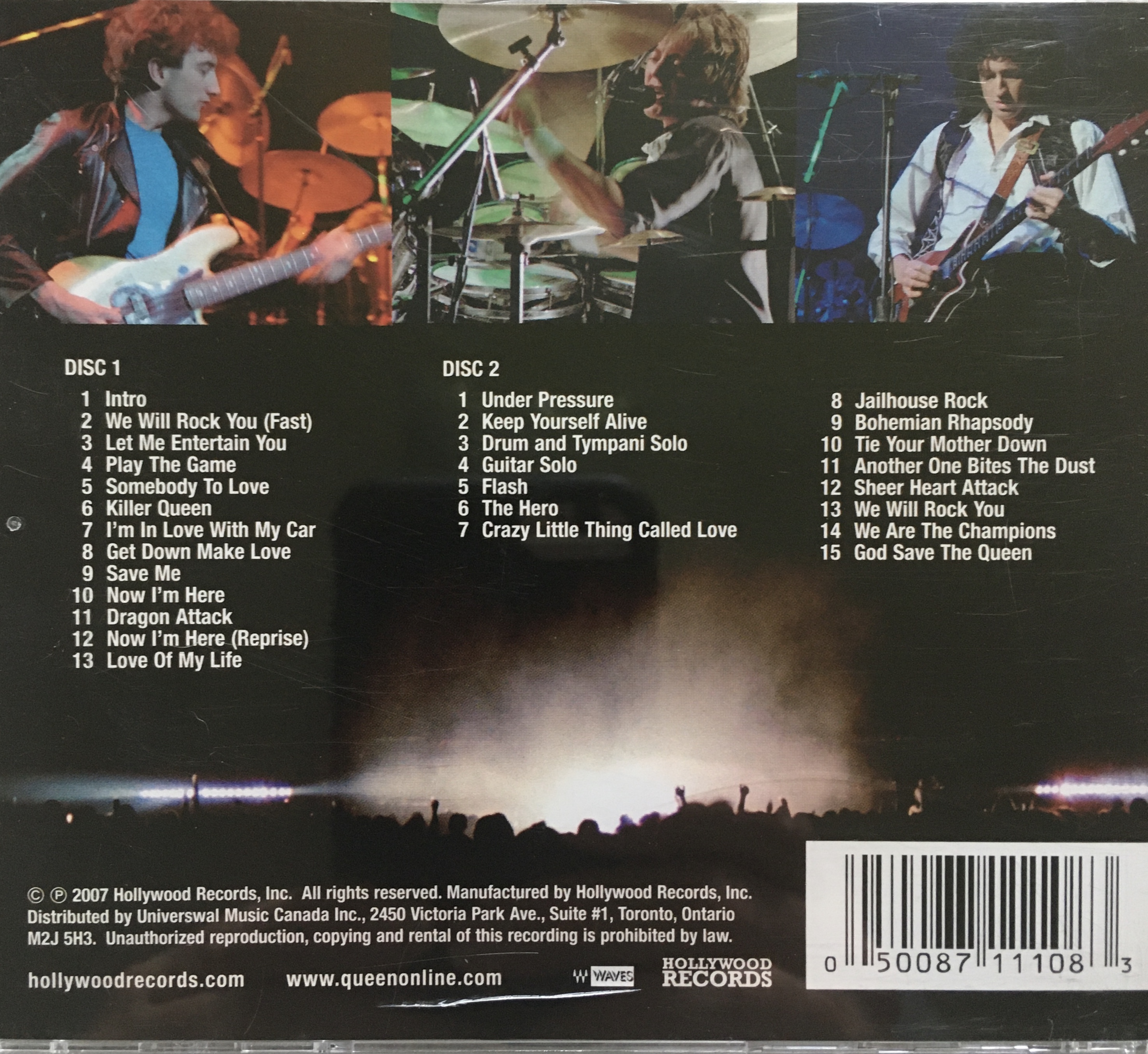 28 songs! 100 minutes. All the hits! Plus for an added bonus the mighty “Dragon Attack” is played!

And how about one of the greatest stage exits of all time where Freddie tells the Montreal crowd “All right Let’s Go Get Fucked!”

Space Ace had a ton of momentum going into early 1988 after the release of the more than decent Frehley’s Comet (87) debut and a little 5 song ass-kicker EP  that dropped in early 88.

A few months later came the second and final Frehley’s Comet studio album under that moniker. I bought it right away as it was Ace. Ace was always my favorite guy in KISS.

I’m talking 70’s Ace as he was half cut all the time but wailed out some memorable solos on the KISS songs as well as putting out a phenomenal solo album in 78.

I’m sure Paul and Gene were pissed as Ace’s creativity went through the roof after 78.

For proof listen to the Ace tracks from 79’s Dynasty album (Hard Times/Save Your Love, Ace even made his cover of the Stones 2000 Man sound like his own) 80’s Unmasked (Talk To Me/Torpedo Girl/Two Sides of the Coin) and 81’s Elder(Dark Light/Escape From The Island)

Ace got a pass from me right up to 88 as something happened to the classic creativity period. It dried up like the Sahara desert for Ace.

Second Sighting is not a bad album as many made it out to be. Pretty much the blame was directed at Tod Howarth who was the second vocalist/guitarist and keyboardist. 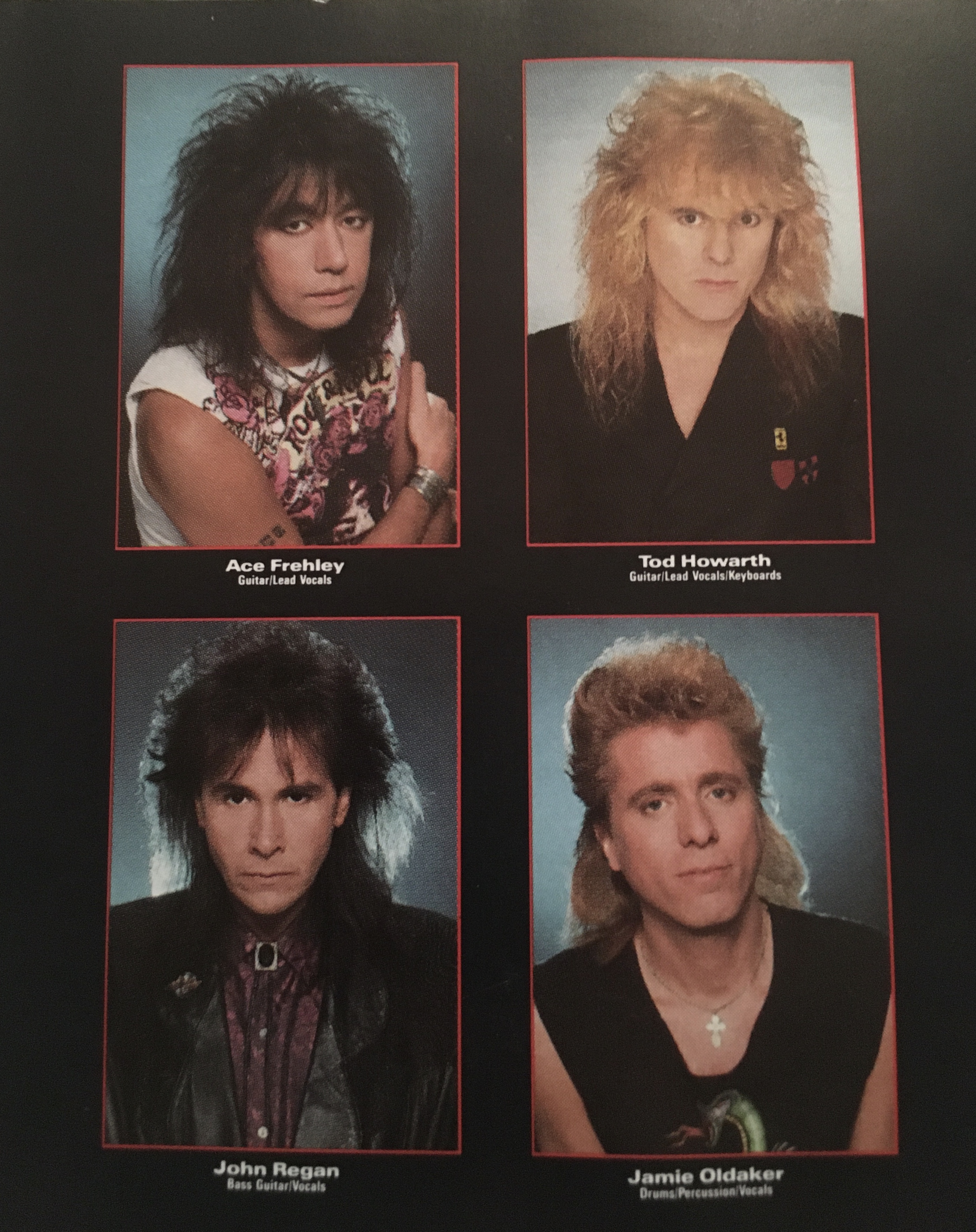 Sure Second Sighting is more on the melodic side of rock, You have to be in the right frame of mind to listen to it especially when comparing it to Ace’s previous albums/songs.

The Spaceman did show up especially on opener Insane. Typical Ace track. A cool street vocal thing that Ace had and of course one of his cool classic liquored up solos!

Ace is back and he told ya so! For this track that is.

What’s a guy like Howarth to do though? When your leader doesn’t come in with the goods so to speak its all hands on deck so Howarth steps up with 5 tracks. More on the melodic rock side (Time Runnin Out, New Kind of Lover) along with the go-to style of many a 1988 release which is a power ballad (It’s Over Now).

Ace came up 4 of his own songs with the best being Insane as I already mentioned. The other Ace tracks (Juvenile Delinquent, Separate)  are ok. Nothing to write home about really and even the last song on Second Sighting the instrumental The Acorn Is Spinning is well there…

There is a Canadian connection to this disc as well as Dancing with Danger a tune by Streetheart is included but how did Ace get a writing credit on this song when it was recorded and written solely by Streetheart 5 years earlier in 1983?

( Pictured below, Izzy is intrigued by Second Sighting) 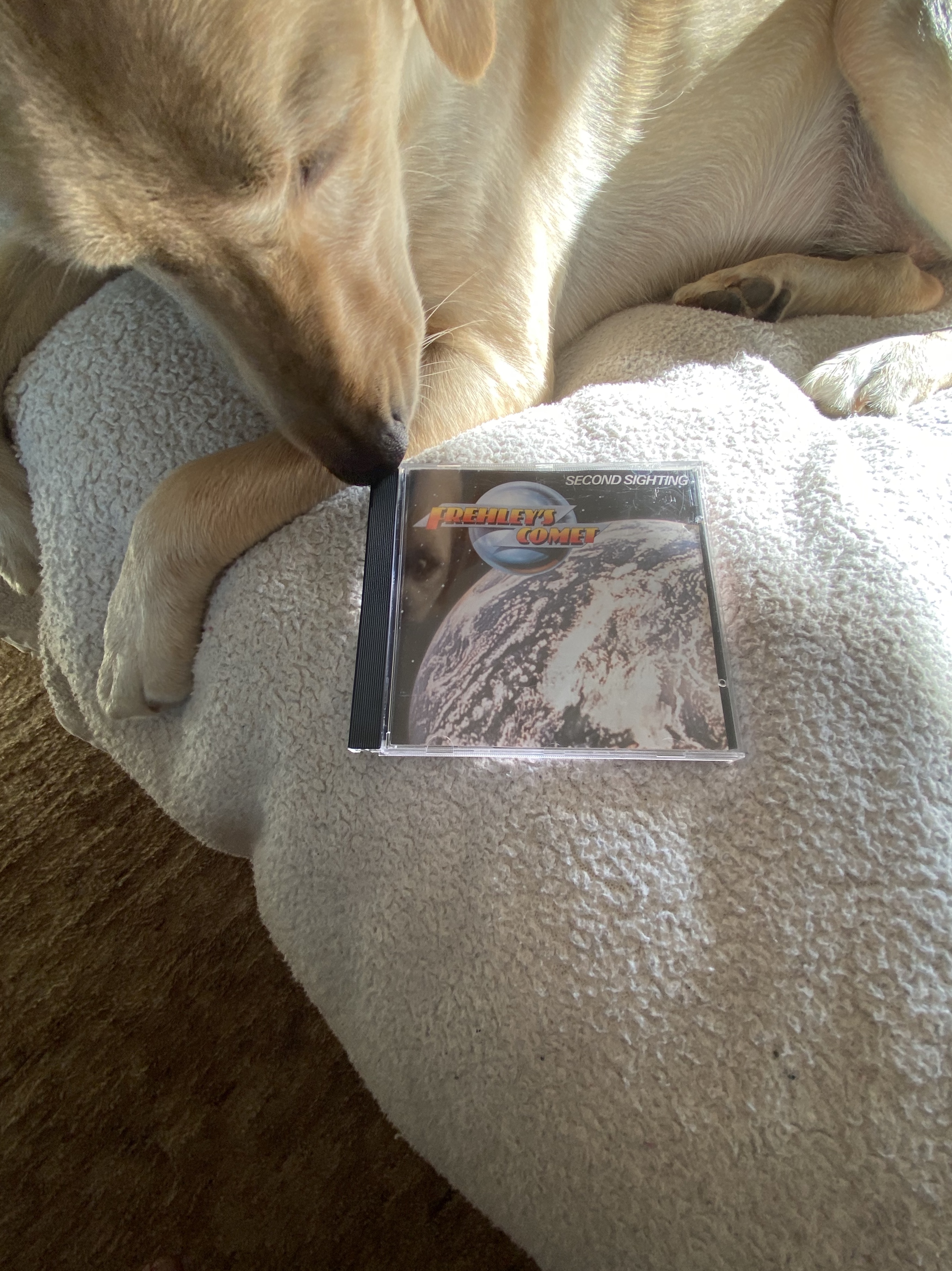 Better yet how the hell did Dana Strum get a co-write as well? Shit, I should throw my hat in the mix say that I was a co-writer as well!

I listened to this album for perhaps the first time in 32 years recently and as it didn’t exactly set the world on fire (stalled on the Billboard charts at 81)  give Howarth some credit though as he tried to keep the Comet from crashing so you gotta give him a pass.

The Comet did indeed burn up as once on tour in 88 the money stopped rolling in and the band packed it in.

I packed it in with solo Frehley as well until Ace released Spaceman a few years back and it was actually a really good record.^

^-Ladano was where I read that Ace had put out a good rock record in Spaceman so I took the gamble bought it and liked it. Figured if it sucked I could yell at Mikey! 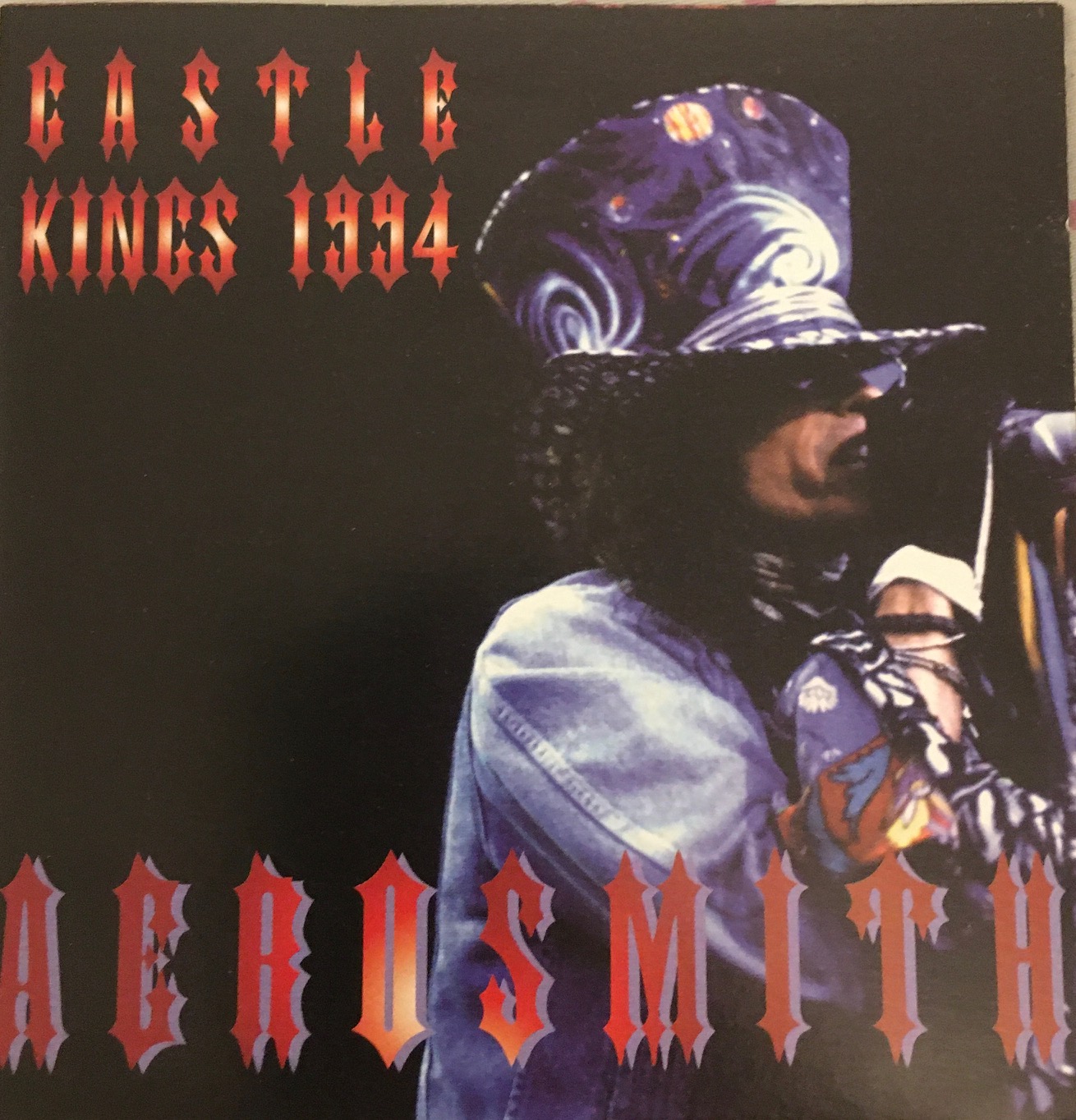 What you see pictured above is the cover of a live bootleg by Aerosmith recorded back in June 1994 as Aerosmith headlined the yearly Castle Donnington Festival in England.

Get A Grip was a long tour that stretched from April 93 to December 94. I was fortunate to have caught this tour about 5 shows in when the tour hit Minneapolis. It was fantastic so when I came across this bootleg here in Thunder Bay here in early 95 It was a quick grab.

Aero up to that point had not really released many live albums. The 80s brought those two Classics Live records but I wasn’t really too fond of them so for me it always comes down to Aero’s  Live Bootleg (1978) which is the ultimate live experience committed to vinyl as far as I’m concerned. 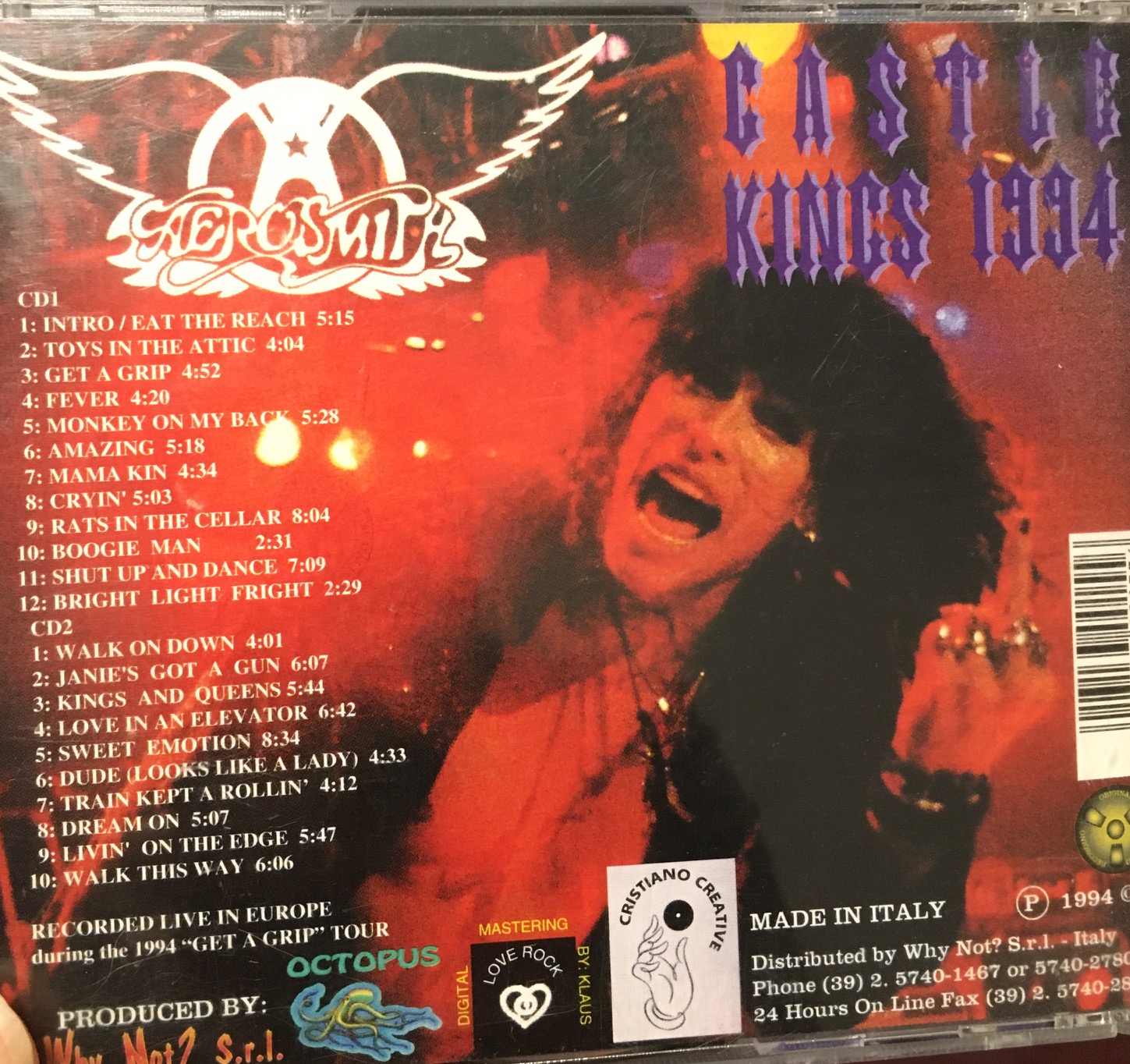 Back then buying bootlegs back was a gamble. The only thing I would consider buying a bootleg was long as it was recorded from the soundboard. If it was an audience recording forget it. I don’t need to hear some fella hollering a bunch of jibberish in an arena.

Castle Kings is a soundboard recording and features 22 songs and as you can see by the back cover track listing there’s a split of MTV Aero and Pre MTV Aero.

Get A Grip I thought was a decent enough album. Perhaps a few songs too many on it but overall it had some stellar tracks like Eat The Rich, Living On The Edge, Fever to name but a few.

Once I saw the 70’s material on Castle Kings like Toys In The Attic, Rats In The Cellar I was hooked but it was those rarely played tracks like Kings And Queens and especially Bright Light Fright that had me sold.

Both of those tracks come from the Draw The Line album and Kings And Queens has the Aerotrain kinda going off the tracks somewhat at the start with the guitars but they pull it together. You hear it for your self below… Crank it!

Bright Light Fright is rarely if ever played so to hear Joe Perry singing the lead vocal is cool (he also sang Walk On Down right after as well). BLF is a barnstorming good time hard-driving sax rock track.  Crank this mutha below…

That’s the great thing about boots. This is the band 100% live.  No dicking about in the studio. Warts n All.

Even the packaging for this disc looks pro.

I did take a look online to see what this disc is going for today and it’s still selling anywhere between $40- 50 American!

A pretty good snapshot of Aerosmith during there huge early 90s success. 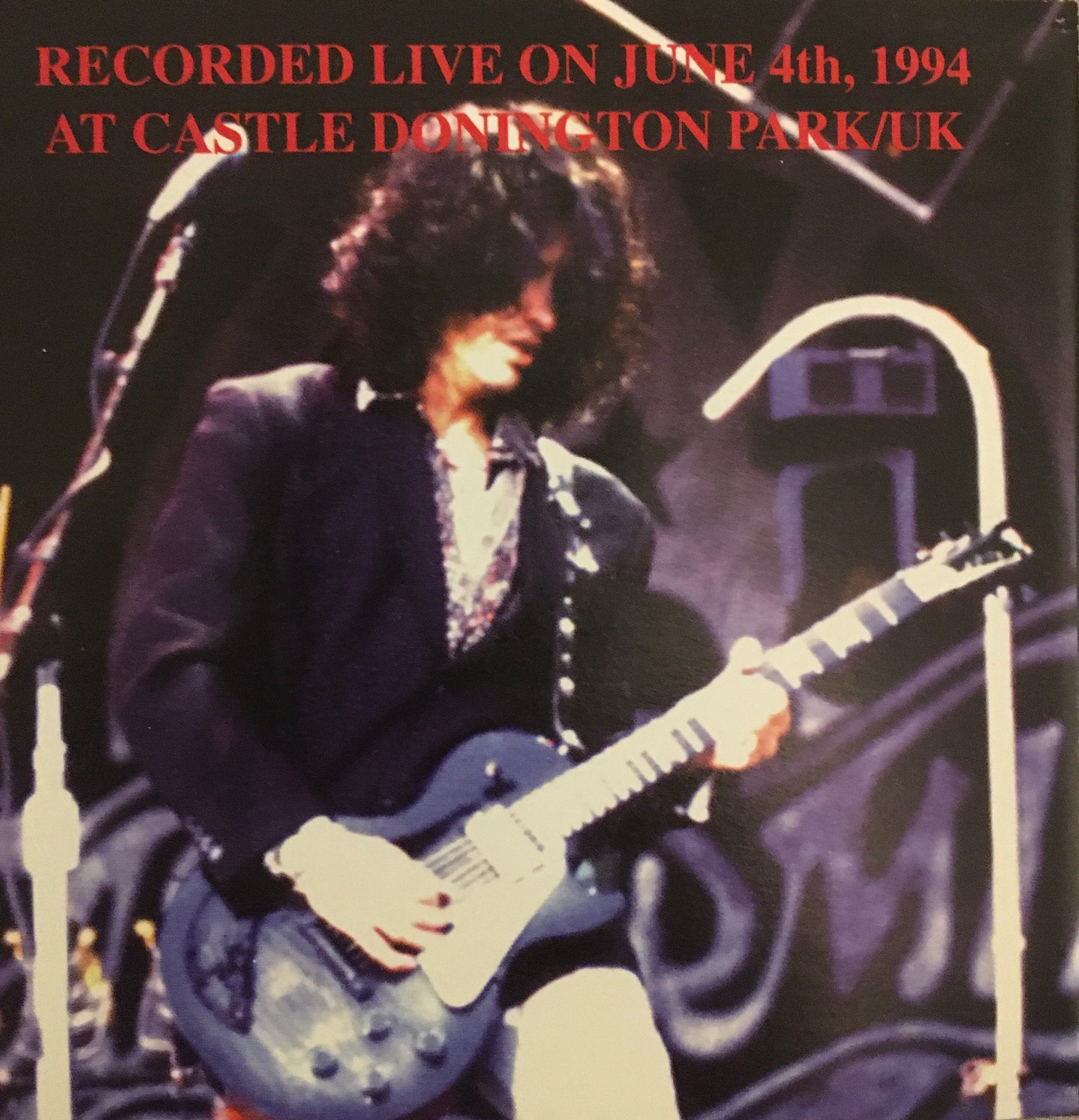 So as 1989 rolled into 1990 Don Dokken by than had bid adieu to his old Dokken bandmates and formed a new version of Dokken.

The only problem was that the old partnership Don had with George Lynch/Mick Brown and Jeff Pilson sued Don from using his own last name on any forthcoming release.

Kind of a different ring to it.

In hindsight, this hurt on what any momentum could be built upon which is truly a fantastic Dokkenish record. It came up a little short in the Gold Record department but if the album was called Dokken It would have shot past Gold status!

We all know the silly pissy pants shenanigans that went on with Lynch and Don(throughout the 80s) and they finally put a fork in there working relationship as they each got there own record deals as George formed Lynch Mob while Don formed the Don Dokken Band.

At the time I thought if anything maybe I’ll get two good bands moving forward. For a time it was looking that way, ok maybe for a year tops! lol

Don decided to do a pretty smart thing and that was to get two guitarists for his new project. John Norum ex of Europe and Billy White (from Texas) formed a very good guitar duo as there would be no comparisons to Lynch.

Peter Baltes on Bass came from Accept who was basically done at that point and Drummer Mikkey Dee who had played with HMO Fan Favourite King Diamond.

Together they released what I would think you could say is more of a Dokken album that Don would be more in line with than some of the actual Dokken albums that came out between 1983-87.

By that, I mean more melodic rock.

If you followed any of that Dokken drama between George and Don. It was supposedly George who didn’t want Alone Again the big power ballad to be on 84’s Tooth And Nail record. Out of the 10 songs on Tooth And Nail George had a hand on 9 tracks and guess what song doesn’t have George with a songwriting credit?

Yep, you guessed it.

Alone Again which basically saved Tooth And Nail in sales and pushed the album to Gold as it was sliding down the charts.

I’m sure Don reminded George of that on a daily basis.

So when listening to Up From The Ashes it does have a little more of a melodic slant on the tunes. Tracks like When Love Finds A Fool, Mirror Mirror, and Stay feature that kind of vibe that Don wanted more in Dokken but in turn never got his way and now he could get his way.

Having said that Don let the others contribute as White had 6 co-writes as well as Norum was in on a few as well.

Make no mistake though as these cats could lift off at a moment’s notice in the rock spectrum as in Crash and Burn, Down In Flames, The Hunger, and one of my favs 1000 Miles Away which features those big Accept like backing vocals in the chorus.

I have to add back then Don had a great melodic rock voice and when you mixed his voice with the hard rock guitars a pretty damn cool sound emerged.

Check out a couple of Bootleg vids from early 91 below…

If you watched the clip you can see this being a new band at the time they were a well-oiled machine as these guys were pros.

Up From The Ashes is a strong Dokken record or should I say Don Dokken record. It truly is a shame this band was iced by the time Grunge came along. One album and done.

Lynch Mob released the decent enough Wicked Sensation but by album two George changed singers and I couldn’t be bothered.

Back in January  1991, I had tickets along with Tbone, Rugg, and Oinks to see Poison in Winnipeg with openers Warrant.

As it turns out Warrant was kicked off the Poison tour about a week before the Winnipeg show and the two-party guys that were running the bus trip out to the show(Guy and Daryl) told us that it would be no Warrant but Dokken.

A few groans could be heard (from the ladies on the bus) as the Down Boys would not be the openers but I was totally ok with it.

Don had this band with him that night and they whipped out a tight 40 minute 8 song set that featured 4 Dokken songs( The Hunter-Alone Again-Into The Fire- In My Dream) and 4 tunes from Up The Ashes. (Give It Up-Mirror Mirror-Stay-Down In Flames)

Don Dokken Band wiped Poison off the floor that January night in the Peg. 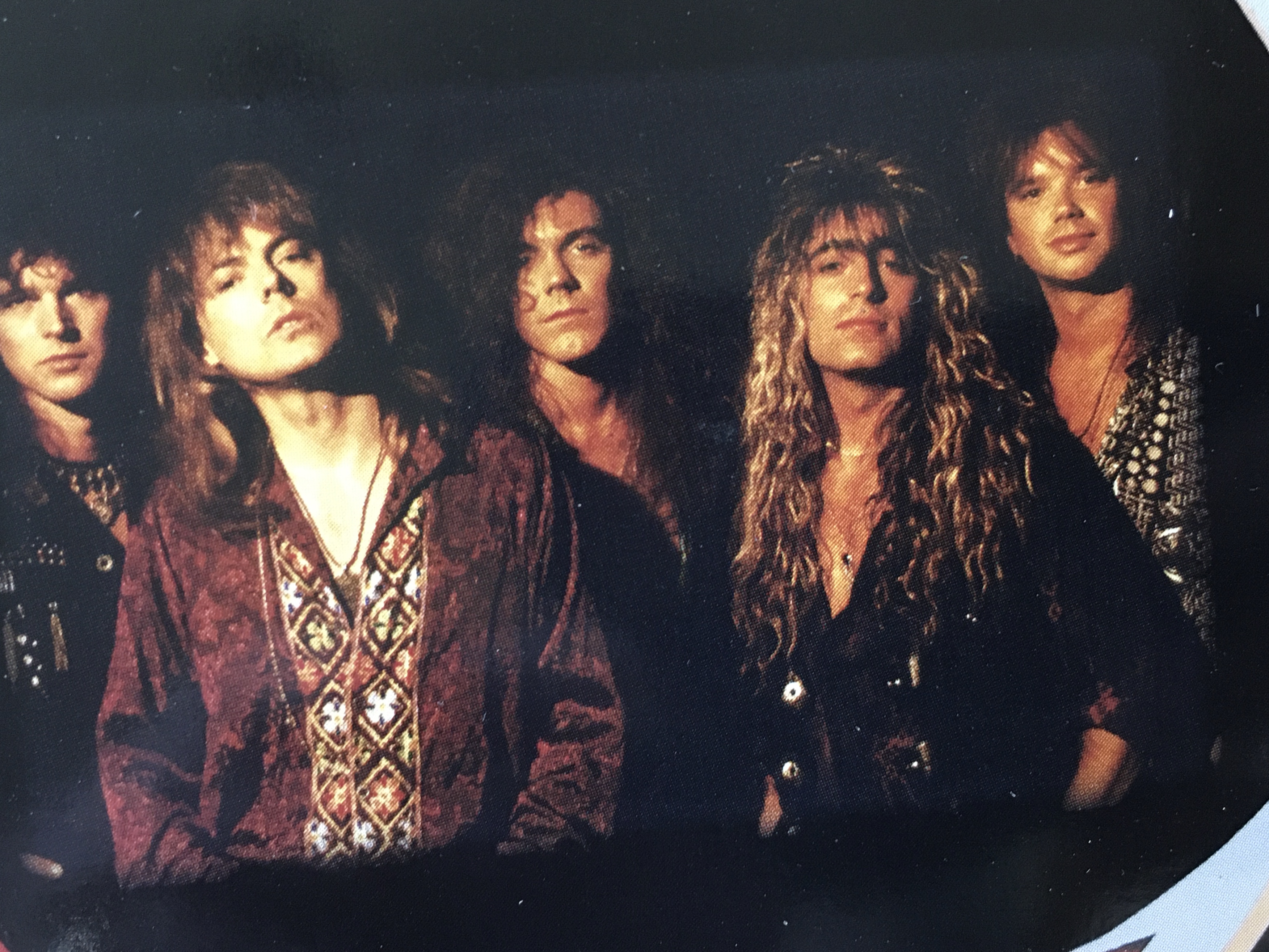