Once again thanks to YOU the readers of this Blog who continually show up/read/comment around these parts and enjoy my Scribbles of Rawk!

I had a couple of guests as well to add to the total which were Tbone with a Hip and Van Halen review and my sister who reviewed Def Leppard recently! Tbone and Kristin did a fantastic job!

1-Sebastian Bach/18 & LIfe On Skid Row- Yup Ladies and Gents in the past year a Book takes the top spot. Mikey Ladano posted my review on his Twitter page in which Baz seen and retweeted it to his Twitter and posted it to his Facebook Page. Thanks Mikey….and just goes to show you  that people are watching what you post even coming from a  rock schmuck sitting at his computer in Tbay!

2-Toque-Is the all star Canuck only group featuring Todd Kerns/Cory Churko and Brent Fitz who released a fun Canuck only cover album featuring a bunch of cool cover tunes with an updated sound! Thanks to Cory who posted my review on the Toque Facebook homepage!

3-Stephen Pearcy/Smash-  Stevie-o totally stepped up on this album and kicked out the jams in superb 80’s sleazeball rock that totally blew me away. Blown away that Stephen plastered my review on his Twitter and Facebook page and sent me a thanks via messenger!

4-Rock The Fort Day 2/The Cult/Cinderfella…- This was the ass kicking festival that showed up in Tbay and was a two day affair with Day2 headlined by Wolfchild and Duffy who basically ruled the weekend with there performance(check out current release Hidden City folk’s) Must also mention that Tommy Keifer showed up and played a wicked set of Cinderella tunes and solo stuff. Ol Tommy almost stole the weekend….Trews/Helix and Doucette also played this day as well! Great day of Live Rock!

5-Helix/Wild In The Streets-This review was written a few years back and Helix bassist Daryl Gray  graciously posted my review at the time. Daryl a few months ago reposted it via his memories on Facebook and this review picked up a bunch of steam again. Why not! Its a great album and ‘Whacha Bringing To The Party?”

6-Age of Electric/Live at Crocks,April 7th 2017- AOE showed up played Tbay and blew myself and Tbone out of the water with an airtight show filled with a ton of cool tunes. Met the dudes afterwards and they signed my discs and were all cool to chat with.

7th (Tie)- Metal Heart/Aiming High With Accept- Author Martin Popoff wrote a wicked good read on Accept that is well worth the dough. I am by no means a huge Accept fan but Martin delved in a band that really wasn’t written about much even back in the day so it’s these kind of Rock Books that peak my interest level. Martin interviews all these Accept dudes so it’s not some bullshit read. Check out  Popoff’s site.

7th(Tie)-Age of Electric/The Pretty Ep-AOE comes in with there second Top 10 entry and for Todd Kerns it’s 2 Top Tens here with AOE along with Toque. Dude is everywhere. AOE after a ton of years had passed put out this little ass kicker of an EP that is worth your time friends. Do check out!

8-The Tragically Hip-Roxy & Elsewhere- A bunch of fellow writers decided to do a 200 word only review and I choose to do this great soundboard bootleg of The Hip that was recorded back in 1991! They are on fire on this release. Highway Girl and Killer Whale Tank are so good as singer Gord Downie is looped and in another time zone but is so good at telling stories with the Hips riding shotgun and blasting off a ton of riffs underneath! Pure Brilliance and Geoff Stephen would and will be proud to see this entry of his hometown homey’s!

9-KISS Rocks Vegas- Is the audio portion from KISS’s Vegas performance that Mikey Ladano sent me! (Thanks Mikey) How could KISS not crack the Top 10.  These old Geezers are a part of my Musical DNA so to speak and say what you will. Whether you like em or hate em Kiss are a great discussion …..

10-Swords And Tequila/Riots Classic First Decade-Martin Popoff scores a second book here in the Top 10 and Riot is a band I love that stuck out great albums but for some reason never lifted off. Martin did his homework here, Tons of interviews/pics/the real story of which took me right back to over 3 decades ago.  Riot had even less written about them than Accept! Martin fixed that problem and wrote what I feel is one of his best written works!

Well,there you have it. Kinda wild that 3 books cracked the Top 10! Some Cancon is included withThe Hip, AOE,Helix & Toque.  Kinda of a neat mix really…. 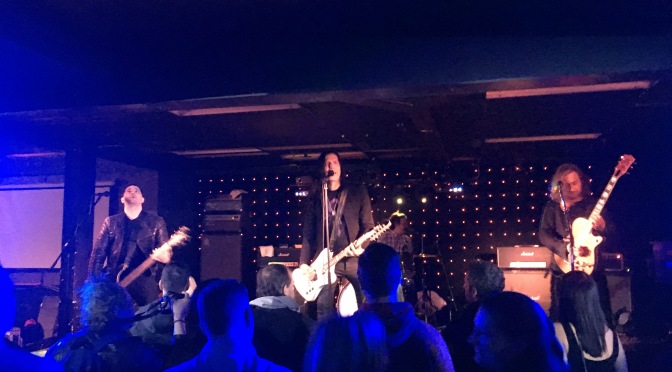 They call my hometown Thunder Bay the home of the Sleeping Giant and well there was a lot of people sleeping in this town last night (April 7th)  that missed a great show as Saskatchewan’s Age Of Electric  showed up and  played an airtight solid Rock Show in front of the faithful who know what Rock N Roll is about! So if were keeping score myself and Tbone (whom I went with) do know what Rock is about and hey for a couple of us Geezer’s who are 50 years young(Tbone) and myself (come October, I hit the Half Century mark) we still know and love the Rawk! 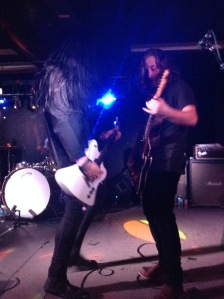 Todd Kerns(Lead Vocals/Guitar) John Kerns(Bass) Ryan Dahle(Lead Guitar) and Drummer Kurt Dahle took to the stage opening with I Don’t Mind from 1997’s Make A Pest A Pet release which this tour is based around and from there it was 16 more AOE tracks that were featured. 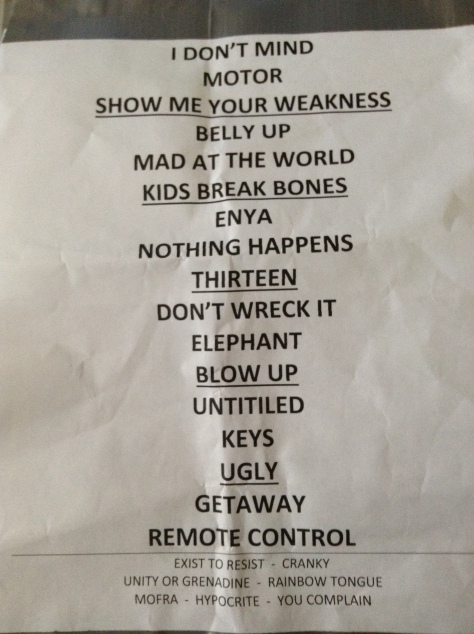 AOE comes across live as a real Ass Kicker of a unit! These guys are seasoned pro’s who have been in the game long enough to know what works in a live setting meaning the AOE are top-notch musicians as guitarist Kurt played a bunch of wicked like solo’s almost at times bluesy but make no mistake as this cat can play the guitar. I know Todd from the stage talked about making new music but where this band excels is definitely in the live setting so perhaps a Live Album is in the making  boy’s?

Speaking of new music not to just make this a nostalgia show AOE played the Four tracks from there recently released  Pretty Things Ep. Kids Break Bones especially come’s across live with Todd and Kurt trading riffs and generally oozing fun from the stage.

Todd knows how to talk to a crowd, basically keeping the vibe going in a positive route with some humour tossed in. At one point  he introduced Kurt as “On Lead Guitar…Ace Frehley “to which he spoke that he would love to be in a band with Ace and just eat KFC and do Cocaine all day” Than he added ‘Well I don’t like KFC!”  He also spoke of Thunder Bay being the ‘Gateway” between East and West and that they were headed East. Even when introducing new songs like Elephant and Keys  Todd would intro it by saying “Here’s a song we are playing for the first time ever…..In Thunder Bay that is!”

Todd also thanked the owner and promoter of Crocks Frank Loffredo for being in the business for 30 plus years or so. Todd also spoke about local opening act Tourist Bureau for playing a great set as Todd says that you should “always appreciate the opening act as it’s like foreplay” and as he added he himself had “been a part of the opening act foreplay a million times!”throughout his career.

One song that was played and was tossed in was 1991’s Aphrodisiac Smile which featured Todd jamming out on the  Harmonica while Kurt kept the tune chugging forward from behind his kit.

The Band came back out and wrapped up the night with a two song encore( me and Tbone were  chanting play 8 more songs!)  which AOE closed out with Remote Control.

Course after a few minutes members of the band came out and hung around the merch table to talk to us and they were super cool guys. Just down to earth chaps.

It was pretty cool to get the The Ugly Ep signed long at last and what was even more cool was that John and Ryan don’t even have a copy of it! They all were gracious to sign my CD’s and take the time to chat!

Great show and thanks once again to Frank for bring AOE to town!

Thanks to Tbone at Rock Til You Drop Photography for the pics..

2017 and Regina Saskatchewan’s Age Of Electric are back with a 4 Song EP that clocks in just under 13 minutes!

The Electric Men Are…

Great to see these Guys back in action where they had a decent run in the mid 90’s with the albums Age Of Electric(1995) and Make A Pest A Pet(1997). Like many a band A.O.E packed up shop for a  few years(17 years if you call that a few) and various projects by the members as in the Dahle Brothers  forming Limblifter while the Kern Brothers released the excellent Static In Stereo album. Todd as any rock fan knows  ended up slinging Bass in Slash’s solo band while also putting out the real slick throwback all Canadian Covers album with a bunch of Canadian Hotshot’s and calling themselves Toque which as you know I have reviewed!

A.O.E have put out 4 standout tracks. It’s like after all this time they never skipped a beat which is amazing but the caliber of the vocals/musicianship should come as no surprise!

Kids Break Bones leads off and is a straight ahead rock track. Like the shuffle of the drums along with the short blasts of guitar riffs. The chorus is oh so good once you hear it will be stuck in your noggin for hours. Not to heavy and not to light in the rock department  but just a good well written track. Check the video I posted below …

“There’s an Elephant in the room” sings Todd and were off and running. John Kerns drives this tune with his Bass and its a another bonafide winner here. Love how the drums pushes the song towards the end while the guitars and drums shift gears. The Rhythm section of John and Kurt take over this tune!

Show Me Your Weakness kicks off with a quick guitar riff and this fast paced Rocker features not only Todd on vocals but I believe Ryan sharing the lead vocal as well. Nice vocal interplay between the two.

Keys ends this shorty EP with another great piece of  rock. Guitars set the pace here. These guys do know how to write slick choruses and Keys is another one. Todd sings “Keys are in the Ignition and the door is always open” Nice sonics with the guitars on not only this song but the other three as well…Vid is posted…

Real cool that these Electric Dudes are back in Action! This is a great little four getting to know you all again starter pack! Dig the fact that in 1994 AOE released the 4 Song Ep and called it Ugly. Now 23 years later here comes the The Pretty EP.  The Kern and Dahle Brothers on this EP dip back a bit in there sound of yesteryear  yet maintaining an eye towards the future which I hope results in a full-out album release…

Look forward to the AOE  show when it hits Thunder Bay April 7th at Crocks! Get tix here by clicking…

I will be there!