So Day 2 of the Thunder Bay Blues Festival comes and goes so let’s get to it ok!

Word on the street is that 8000 people showed up to check out the acts that played down at the local waterfront festival on Saturday and you ask how do I know? Well simple! It was announced about 8000 Fuckin times that a new attendance record had been set in  the 16th year of the Festival! Ok that’s awesome lets move on from the continuous verbal ego boosting as I still find stuff wrong with this festival and a few decent things but I will gripe after..

The weather today was on/off light rain which was no biggie it would rain stop for a bit start but as the day progressed it got clearer out!

Let The Music Do The Talking….

Myself,Suzi and my pal Chuck D and his girlfriend Jennifer arrived at around 3:30 in the afternoon just as Vancouver’s Barney Bentall And The Legendary Hearts took the stage.

(pic below L-R ..Jennifer/Suzi and a Lunatic!) 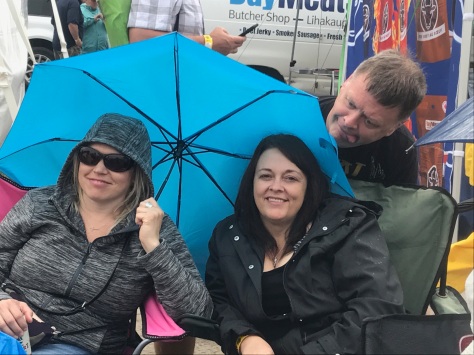 Barney’s music on this day was basically John Mellancamp Lite. This is mid tempo rock kinda one beat and pace throughout. Nothing to write home about. Barney needs to crank the amp up in my estimation but the cat has been at it for so long(since 1988) as I don’t think that will change.  Basically I recognised one tune and that was from his 88 album debut which was Something To Live For.

So I was cruising to get us Beer tickets when I stumbled upon this fellow Rival Sons fan!( He was sporting the Son’s colours as well) He called me over and his girlfriend snapped a pic(I don’t have a iPhone) and I moved on. Later in the day he came by where we were sitting and Suzi snapped a shot of us on her phone. Never even got the fellow’s name. Seemed like a real chill dude and frigg he dig’s Rival Son’s so how about we call him Rando!

Lighthouse another Canadian radio staple for close to 50 years took the stage. This 9 piece act had a 4 piece horn section with them, Nothing like hearing live horns not some silly willy plonk of the ivories from a keyboard. Good act and the first real signs of life from the  audience this weekend as people got up off their asses and started jiving to the classic am rock of Lighthouse’s big radio hits like Summer Nights and One Fine Morning.  Lighthouse was good and entertaining and the second ever band I have heard with live horns ever! (Kool & The Gang Being the first) Dan Clancy  the lead singer was all over the place and should be commended as he worked the crowd hard man and was rewarded!

Another Canadian Blues N Brass band that has been going for about 40 years now is The Powder Blues Band. Led by founding member Tom Lavin Powder Blues featured 6 fella’s even featuring a local fellow on keyboards. (Sorry fella can’t remember your name) But these guys can play and Lavin told a great story about the late Jeff Healy as well. Powder Blues were good and of course big hit Doin It Right On The Wrong Side Of Town had people hopping.

Dunno what was going on as well, some kind of delay perhaps but 4 dudes hit the stage for a bit and played cover tunes? Killing time I would call it as the festival was about close to 90 minutes behind schedule and if you work early Sunday am this sucks. This festival is notorious for running late. Supposed to end at 11 pm but when the main act doesn’t hit the stage til 10:40 pm your shooting way over…

Alan Doyle And The Beautiful Gypsies hailing from Newfoundland rocked the Festival with a rocked up Irish Jig super fuel charged set! Alan was here with his previous band Great Big Sea four years ago and put on a great show. So now Al’s back with a new band and I can tell you there is no dip in this fella’s stage presence. Ton’s of energy and the real ace in the hole in Doyle s band is guitarist Cory Tetford  who wailed on the six string not showing off but playing slick like leads and at other times playing some nifty slide guitar as well.  Doyle has just released a new single Summer Summer Night which for a new track went over well and thorough out his 12 song set he kept working the crowd switching between his acoustic and electric guitar. He also dipped into his back catalogue and played Great Big Sea’s Ordinary Day and closed his set with 1,2,3,4 a song that had headliners Barenaked Ladies Frontman/Guitarist Ed Roberston jam on..

Barenaked Ladies came out and thanks to the energy put forth by Doyle was kinda lost when BNL opened with a track called Boomerang. Kinda mellow rock to open but the crowd was revived when the second track It’s All Been Done had the crowd moving. BNL are a quirky rock act to say the least ( did a jam out about a local Tbay pancake joint)and thats what I kinda dig about em. Not a huge fan per se but they are a tight live act and l will give them that. Tons of their hits were played and I like the guitar driven rock of tracks like Old Apartment. Even the theme of Big Bang Theory(TV show) was played. Big old-time jam out with Doyle and his band along with Bentall who joined BNL for IF I Had A $1000,0000 had the crowd moving as well….Good Act.. 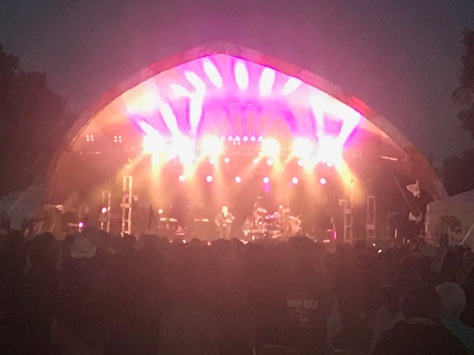 Day 2 was better act wise than Day 1. Doyle for my moneys worth should have headlined Day 2 over BNL’S as Doyle’s beer driven celtic rock cannot be beaten at this kind of festival. Even though I only know Doyle by his radio tunes and don’t own any of his music it speaks volumes that he can show up here to Tbay and make an old Metalhead like me take notice not once but twice!

Alan Doyle-10/10 (Suzi sez knew how to entertain a crowd. Did not let the crowd flatline)

Back in early February I was lucky enough to visit the great city of Vancouver British Columbia and hangout with my good friends Metal Todd and his wife Nicole. On one rainy Friday afternoon Nicole asked me if I wanted to check out Stanley Park. “Hell’s Yes!” said I and after having lunch along with Metal Todd’s brother Jordan(Metal Todd unfortunately was working) Myself and Nic started the drive towards Stanley Park. Traffic though was backed up quite a bit(downtown) so in between our conversations in the background Nic had her radio dial set  on Jack Fm 96.6.

Jack Fm is not a metal Station. They do play rock so I thought it would be fun and different to write about some of the songs that to be honest a lot of these tunes I don’t own but due to their success years ago between radio and video airplay there etched in my  brain somewhere.

These songs are ones I do remember and are not in any particular order.

One Week-Barenaked Ladies,and when we were having lunch we talked about Quirkiness and of course I spun the angle of music Quirkiness and for myself that would be Cheap Trick(old school quirky) The Cars (new wave quirky ) and Weezer (alternative quirky). When we were stuck in traffic on came One Week and Nic stated “Speaking Of Quirkiness!” BNL are just that this  song is goofball-itis with its goofy half rap,bit of talk ,bit of rock. But I tell Ya the part when BNL goes into  the pre chorus is the hook! Frigg  man a catchy hook is a catchy hook.

Jesse’s Girl-Rick Springfield man I remember when this song hit huge pay dirt when I was  in Highschool. It was a staple on Casey Kasem’s Top 10 weekly countdown Saturday afternoons at 12 pm on TV. I think it crossed over into my buddy Mucs house as he had a copy of Working Class Dog! Rick being the troublemaker wants his buddy’s chick. Ahh shit this ain’t gonna end very well Rick! Walk away dude ….walk away!

This Time-More Canadian Rock via Mr Adams. This Time is a great catchy tune. The verses are the money shot here with that eery creepy keyboard lurking in the background (with blasts of huge percussion like gun shots)and this is (pre sappy Robin Hood ballad )Adams  before he made a huge dent in the music scene but after this and many other singles from Cuts Like A Knife everyone knew Adams deal! When you think of Canadian AOR Rock. This track has to be in the mix.

Holiday-Green Day kick some ass on this track! The drums courtesy of Tre Cool drive the Day Train to the Station while Billy Joe Armstromg lays down a good vocal and the pre chorus and chorus are real good! Great song!

The Joker-Who doesn’t have Steve Millers Greatest Hits hold your hands up. Yup I got this and it’s the only Steve Miller Band album I own. Props to this guy as he can tour every year just playing the Hits! The Joker is a laid back no make that a real laid back tune. Space Cowboy indeed! Now I know what your gonna say. Deke likes a Greatest Hits set? Yup this one is a all time great! Think I may have to review it at some point!

Mrs Robinson- Out of all the tracks here this one caught my ear right away as I hadn’t heard it about 20 years! The Lemonheads were their name and  cashing out a one hit wonder cover was the game. They do it justice and the bass on this is fantastic as it pushes the tune along and of course for good measure toss in some catchy ‘ do do do’s ” etc  and it’s a sure-fire winner! Whatever happened to that Evan Dando guy anyways! This song  was a great flashback…

Now. Metal Todd drove me out to the airport a day later and it was God Flesh that was playing in his car and what better way to start your day with some Real  Metal at 6:30 am! Aaaaaaaarghhhhh M-E-T-A-L!!

Great story Metal Todd told me as these guys especially the singer/guitarist( Justin Broadwick) crashed and burned literally personally  and professionally and a few years later  bounced back with the bass player(G.C Green) and with a drum machine metalled their way back to the public even into a Vancouver a show at which Metal Todd tossed the horns live at them  in salute!

FYI- Vancouver Shakedown by Nazareth(video posted) was not played on the radio that day! I needed a cool title for this little tale of visiting the Big City! Cool old school Naz tune! Enjoy!