Darr I have known for about as long as I have known Tbone and there’s a simple explanation  for that and the answer would be that Darr is TBones younger brother( not by much though!)

Darr growing up got the knowledge of all good things Rock from myself and Tbone! Basically it worked like this. I would buy the product. Than pass it on to Tbone and from the inner sanctum of Tbones Basement Bedroom Darr would hear and be and be captivated by the Sonics Of Rock ….

Like what I did to Tbone I loaded up a syringe of Roth Era Van Halen and shot Darr up ! From there he gathered up all things  Rock(1987-88 or so) and found his own path. Digging around buying stuff and I would occasionally check in to see his growing Cassette Collection growing by leaps and bounds. After a short while I knew my work with Darr was done!

So here we are almost 30 years later and when I posted my Top 20 Albums on Facebook Darr delivered and real Super Duper List like along with his old brother as like all good friends do to another  I called them out publicly!

After Darr posted to my FaceCrack page his Top 20 and we bantered a bit I knew I had to yammer  about his selections. 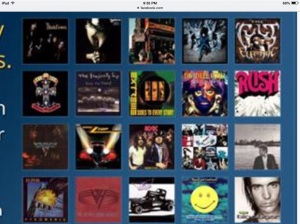 The Cult Electric and Guns N Destruction just like Tbones and my list made the cut! 1987 Babee……

Aerosmiths Pump(1989) makes an appearance and why wouldn’t  it? Its SoberAero but it still reeks some sleaze ball like slickness that is a classic for sure and just like the Aero albums of Toys In The Attic and Rocks. Steve-o and Joe put the ballad right at the end of the album and I’m real fuckin good with this move! Not a dud on this album and as we had all seen this tour in Winnipeg(March 1990) that may have swayed Darr somewhat but make no bones about Pump! It’s  a bonfide classic!

Like his older brother,Darr selected ZZ Tops Eliminator and this little Texas Nugget rocks bad ass! ZZ Nation is alive and well with the brothers in Tbay!

Heres  something that Darr pulled out of the Rule box and was a pure genius move! He selected Two Van Halen Albums! Now the rules were you couldn’t  pick two albums by the same band so Darr picked the Van Halen debut(1978) with Dave Roth singing and For Unlawful Carnal Knowledge (1991)with Sammy Hagar singing. True its the same band in name but two different animals in the studio! Van Halens debut is the juggernaut of Guitar Brilliance and the Vocal Shenanigans of Roth while F.U.C.K is Sam fueled with his own spin on tunes like the immortal  Poundcake,Right Now and how could we forget Spank! HA!  Not to be outdone Darr even selected Dave’s Eat Em And Smile  as a Top 20 ….Well Played Darr….

Whitesnake before that Crazy Cougar slid all over hoods of cars made Darr’s list with Slide It In!(1984) Great add Darr as the late great Cozy Powell slams those drums and you have John Sykes( playing chill before he’s let loose a few years later on the 1987 album) along with others like Jon Lord and David Coverdale singing about everything Sex,Sex and more Sex! Hey Sex sells so Slide It In!

AC/DC take Darr on the Highway To Hell(1979) and He’s not coming back folks! Night Prowler,Get It Hot are some Gems there that never get discussed and they should! I need to review that bad boy someday!

Bryan Adams with Into The Fire resonated with Darr and this is another great surprise! This album at the time when released in 1987 kinda stalled publicly as it wasn’t Reckless Part Deux! Adams served up a change ball to us and for Darr he took the pitch! Atta Boy! Hearts On Fire from this album is one of the best tunes I think Adams ever wrote!

Bono and U2 make the grade and you can read my thoughts on TBones post about Achtung Baby(1991).

But a real  deadly pick was The Black Crowes with Shake Your Money Maker(1990) Holeee Fudge Darr! This is easily a piece of Rock Gold! Those two wacky Robinson Brothers nailed this one out of the park and into the next decade,make that two and half decades and the album still cooks! Thick N Thin I just love ..no we love it all!

Like on a few lists Def Leppard shows up and for Darr Its pyro rock n roll with Pyromania (1983). What can I say about a  album launching sonics into another stratosphere ….Man Oh MAN……

Darr does not leave the Canadian Rock behind and picks Rushs debut from 1974 with John Rutsey on the drums and Darr must have taken a shine to the throwback sound of the debut. Why Not? This little debut cooks quicker than Tbone frying Finnish Pancakes in the morning after a hard nights Drinkin!

Tragically Hip show up 20 years later after Rushs debut with Day For  A Night(1994) and compared to my fav of the Hip Road Apples  Day For Night is darker more moodier than Apples kinda like as if the Hip were to take a sledgehammer to a bag of Apples! Day For Night would come to fruition! Mopey Hip but it works! Grace Too is a beauty of a opener!

‘Here I Am I’m On The Scene’ so says Gordie Johnson and Big Sugar are here with 1998s Heated a mash-up of ZZ Top  and Bob Marley with a huge dose  of fuzzed up reggae like tones! Even Randy Bachman plays on Let it Ride and old BTO nugget that Bachman wrote…Sweet add as well….

Rest In Peace! Cupids Dead! Yup that would be Three Sides To Every Story(Yours, Mine And The Truth)  by Extreme and can you once again say Shock A Roo! Darr dug deep into his Sonic LunchBook and Wowzers Nuno and Gary would be pleased to see this! Pretty impressive that back in Grunge 92 these boys could toss out a solid rock record and still have it sell….somewhat!

Dazed And Confused a soundtrack that features amongst others a whose who of Classic Rock! Sabbath,Kiss,Foghat,Cooper,Sweet! There all here…..crank it,drink it,snort it whatever it may be! Added bonus points to Mr Darr for this being the first Soundtrack on any list I seen! A round of Kudos please!

Jack Whites  Lazaretto just was released two years ago(2014) Too be honest my old buzzard mind has no idea about anything about this release but if Darr included It Lazaretto must be a Solid Ball Of  Rock! Great pick and perhaps one I should seek out myself and Darr can load up the Sonic Syringe and shoot me up with a dose of Jack Rock!

Beastie Boys Paul Boutique came out in 1989 and I even bought this on cassette and it was a huge departure as for myself I was weened on Fight For Your Right To Party from 1986 but man The Beasties change-up the sonic atmosphere and well how about a round of applause for “Shake Yo Rump” Ha…love that tune Mega Pumping Bass! Darr not only stepped out of the box on these two albums but he kicked the snot out of the box! Well done Son!

Ha! What’s  a old Metal Head doing reviewing a Beasties Track? Well let’s not forget though that when the Beastie Boys dropped Licensed To iLL and when that record blew up with Fight For Your Right To Party and No Sleep Til Brooklyn in early 1987 we all gravitated towards this sound I mean there young guys(Adam Yauch(RIP),Ad Rock and Mike D) rapping over drums beats that I swear to God were done by Les Warner(drummer from the Cult) but weren’t but man Rick Rubin had just  produced the Cults awesome Electric record with Warner on the kit but yeah the Beasties of course had some metal sounding riffs(the dude from Slayer in the Fight For Your Right video) and what the hell so we all bought it!

Next up was Paul’s  Boutique in 1989 and I loved the heavy bass of Shake YourRump…hahahaha and well they kinda confused me they were changing it up with a curveball of a music shift but my head was buried in Warrants Cherry Pie at the time!  Hahahaha…

Of course I followed them from a distance but man they made some real cool videos!

So fast forward to late June 2014 and Aaron from keepsmealive.wordpress.com drops in the mailbox not one but 2 Beastie cds! One of the things he told me via email was he was interested in how a rocker would perceive the Beasties sound!

Challenge accepted! Sorry Aaron it took so long a full album will be coming but for now lemme tell Ya all about how this Ol Rock Dog hears Jimmy James! A song about Jimi Hendrix!

Jimmy James comes from the 1992 Beastie album Check Your Head.

This song is just a chill beat and a ton of Hendrix samples( they had to get the Ok from The Hendrix estate)tons of rapping and listen to dudes scratching and hacking on there turntables. These  guys were in my book originators but of cousre I’m about 23 years late to the party !

I always thought the three dudes had real cool rap voices that all blended  together remarkably well! Case in point,how about when in Fight For Your Right during the line where the 3 Dudes each throw down ” Your mamas just jealous it’s The Beastie Boys!” Never heard stuff like that back than…