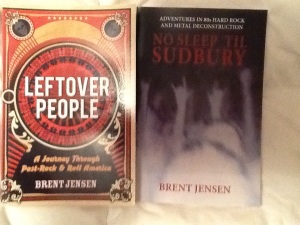 Leftover People is the second book from Brent Jensen a fellow Canadian who wrote the excellent book No Sleep Til Sudbury about growing up and listening to hard rock in the 80s. In No Sleep, Brent takes us from the time of seeing Iron Maiden live in Sudbury on Maidens 1984 Powerslave tour and how it all falls into place musically for him when he again goes and sees Maiden on there 2007 (23 years later)tour when they recreated the whole Powerslave meal deal live!

Like I said Brent’s first book No Sleep til Sudbury is a great read! Brent tells great stories like meeting Gene Simmons and whatever happened to Dave Allison the original guitar player from Anvil? Well buy the book and find out! Plus he talks about guitar heroes, his analogy of new Aerosmith vs Ol Aerosmith is one of the best-written pieces describing the two!

Well put, and many, many more music stories, drinking stories ..it’s all there and for me, it’s the book I wish I could have written as I can relate to many of Brent’s stories both musically and personally. Don’t be fooled by the title of Sudbury being in the title, you can be from Mars and still read this book as if you listened to hard rock from anywhere in the world you will be able to relate!

Brent is contacted by a fellow named Chris Long( whose name is later rechristened to Pink Chief) a fellow writer who wrote a book about working for Poison as a personal assistant to Bobby Dall. The book is called Shot Full Of Poison, I myself have not read it but from what Brent says his poor pal Mr. Long almost had a nervous and mental breakdown working for Mr. Dall!

Basically, Brent tells us of his road trip that he takes promoting No Sleep Til Sudbury in parts of the U.S. with Chris Long who has booked them into vinyl shops/coffee shops instead of regular places like bookstores, and along for the journey is Brent’s buddy Flemming (who by the sounds of it could write his own book!) and Chris Longs son Jesse.

Brent does a great job of writing about his journeys on the road thru various stops and at the early stages of how he and Flemming would fuck with Long when he would come to their hotel room..they would signal him thru the window that the door to their hotel room was open and then Long would go to open it and it was locked! All the time Long fell for it! I think we can all relate to people we have screwed with and toyed with thru the years!

Brent also tells us of another great story about some female woman who they termed the Nashville Predator(Jensen and Crue are in Nashville ) as she stalked them and treated them to drinks in which Brent had to pay as her credit card was declined and I won’t give it away but it’s a great hysterical story.

The real great thing I like about Brent’s two books Is that as a hard rocker I can totally relate to him especially musically. In Leftover People he talks about Guns N Roses Use Your Illusions and why he made one big greatest hits single disc out of there double discs and they all included songs that were written by Izzy Stradlin and once he was gone by the end of 1991 Guns was done creatively!

Another “rad” thing about Brent’s books he can shift from present-day stories and keep me totally hooked by throwing in his knowledge on all things that are hard rock n roll from past years! His school grade stories about public speaking from the early 80s is the real deal. If you are around my age(47) you know how Public Speaking went in schools back in the 80s. Brent tells us how he was scarred from speaking publicly for many years but overcame it and has no problem with it now except for as he says some crazy’s  that now and again appear at his book signings. (more good stories there).

One of these Chapters in the book is called Saskadelphia I don’t want to give it away too much but after reading about artists diverse in this chapter like The Tragically Hip, Barenaked Ladies, Kesha, Toni Basil, Jensen ties it up all nice and neatly just don’t offer him or Flem a Burger King Whopper with guacamole after a night of drinking!

In each city that this book posse travels thru there are tales to be told. Chattanooga, Macon, Jacksonville, and Melbourne are all described in great detail as these are the book tour stops!

Melbourne Florida at their book tour stop Brent notices Jack Starr of Virgin Steele fame(New York band from the 80s) and the two get to talking and find out they have mutual respect for each other. The moral of the story is that it’s good to meet your heroes and it’s even better when they turn out not to be dicks!

Leftover People is a great read from start to finish. The road stories like I said are classic and the people who Jensen comes across are sometimes interesting characters, to say the least!

Now to be honest with everyone here, I like reading rock biographies only if they are authorized and only if it’s the rock guy telling his story. I can’t handle bullshit books it’s a waste of time and well I don’t have money to toss around on junk. But last year when I think it may have been on bravewords.com I read about Jensen’s first book (No Sleep) and was intrigued by his title and when I went to his site and read his write-up on the book I was hooked and had to get it so it was off to Amazon.ca and it was the best $20 I spent in a long time!

Leftover People, I was able to score off of Brent’s site as he had a contest and I won it! Brent told me on Monday am that I won and he sent the book and 3 days later, in my hands!

We’re lucky in Canada to have rock authors like Jensen, Martin Popoff (whose written a ton of books two of my faves are his books on UFO and Hair Metal) Sean Kelly(Metal On Ice), and Brian Vollmer(Gimmie A…R!)

These dudes are the real deal as when you email via Facebook or goggle Mail they get back to you with whatever it is your questions are about. Why not support our homegrown boys! It’s simple ….buy these books and put the friggin electronics down!