Hey Folks! One of my good friends Aaron from the Keeps  Me Alive Site is gonna be catching Iron Maiden April 3/2016 in Toronto Ontario! So what better time than now to Bash out a few Maiden reviews!

Today it’s the self titled debut Iron Maiden! Maiden stormed out of the gates back in 1980 with this classic piece of Raw Metal N Roll!  For myself on the Maiden purchasing depth chart I did not get this album until the summer of 1982 when I was on vacation in Winnipeg Manitoba with my family and being 15 it was Maiden Maiden Maiden! The Maiden albums I owned where Maiden Japan,Killers and the recently released Number Of The Beast(with new vocalist Bruce Dickinson) but before Maiden did the vocalist switch a Roo Paul Dianno had that punk like attitude fronting Maiden! Rough N Gruff around the edges but the guy delivered the goods for two studio albums and a live E.P so I’m not gonna knock him!

I could though as a few years later in 1985 I bought his self titled Dianno album and it was a bunch of bad Journey like tunes! I got hosed on that one folks! Should have hyped it and  sold it to Tbone! Ha!

I know by reading past interviews that Harris and crew had some issues of the production on this album by Will Malone. For me though I like the live go for the throat feel on this one. All For One….One For All!

FYI- enjoy the pics of this album as my daughter Lexie bought me this Maiden album for my Bday last year! Great kid!

PROWLER-Stratton and Murray lead off and someone’s dabbling with a Wah like pedal and we’re off! Even on the this album Harris and his bass are not going to mixed down and its apparent within the first 30 seconds of Prowler! Clive slams the drums forward.  The song is a real good stomper of a track. Dig how the band just rolls up their sleeves and does an all out musical ramp up before the solo and what a great solo it is! Maiden 1980 start off a long career on the right foot with a ripper of a opener! Welcome …

REMEMBER TOMORROW-Whoah! Maiden shift gears and slow it down, well for a bit that is. Remember Tomorrow is a chill out not slow burn and  that’s due to Harris and Burr who keep the boat afloat while the guitars are in relax mode until the chorus where the tempos pick up and Dianno here sings for his supper. Maiden were smart as if this was your first time listening to them two songs in two different metal styles. More great guitaring and riffing and cool shuffle of the drums by Burr! Deadly tune!

RUNNING FREE-Burr does the opening and Harris and boys join in and this is one of many Maiden Songs that are now known as Classics! “I’m Running Wild …I’m Running Free Yeah!” You Betcha Paul! I also like the duelling lead guitars between Stratton and Murray. Early  Maiden belting it out! Another great track. The Live video posted features new dude Adrian Smith on guitar as Stratton got the Harris Boot out of the band! Of course Smith/ Murray became my favourite one / two guitar duo ever! No one touches what these guys did in the 80s….

PHANTOM OF THE OPERA-Well let’s make that 4 songs in 4 different style of  metal song structure. No 2 tracks soundalike. Phantom builds up and just goes wiggy all over the map with different music tempos and different horizons! How about some Clive Burr quick drumming with some more dual lead guitar ! And to boot how about 7 minutes of pure Maiden! Phantom would be the first of many signature past 6 minute song Maiden Workout Tracks!

TRANSYLVANIA-Musical Maiden no vocals allowed and the guitars carry this tune but don’t count out Clive and Steve as they hold down the fort and let Dennis and Dave do their thing. This Musical Maiden ploughs forward and toss in some tempo changes and we’re off!

STRANGE WORLD-Kinda of a trip tune here. Not really heavy and definitely not mellow it’s Maiden forging and boxing themselves into just a one trick metal pony! Nice use of guitars and Paul sings a different vibe as you don’t have to be giving it full throttle all the time.

SANCTUARY-Want a classic guitar riff to start a track. It’s all right in front of you. Sanctuary revs Maidens Musical Muscle right up and its a great foot stomper like if you were to stomp your boot thru the door that is. Adrenalin comes to mind. Dig the middle the part of the song where Steve and Clive lock up while the guitars playoff some real neat riffs. Paul ramps up and most tosses a lung by the end of the track.

CHARLOTTE THE HARLOT-Cool metal ditty here. By the way where is 22 Acacia Avenue? That was to come later but poor Charlotte The Harlot getting kicked around by life yet Steve writes a real good melody here. Catchy chorus and even some backing vocals make this song almost lite metal in some spots but don’t be fooled into that thinking as lurking around the corner is…..

IRON MAIDEN-Whoah! Wowzers! 36 years later and this is still the staple of every Live Maiden show and why wouldn’t! Love the creak of the guitars at the beginning and its a full out Maiden Ass Kicker Assault as Dianno brings it home as this song is almost Punky Metal with his attitude all over the lead vocals! Harris and Burr rock the ship and even Harris finally gets in a few bass riffs as Burr hits and runs all over his drums! A fantastic finish to a fantastic debut….

Check back tomorrow (Saturday Special) for another Maiden review as we fast fast forward 35 years! 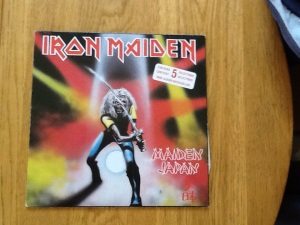 So our local University (LakeHead) had a record sale with local businesses and  people selling used/sealed Vinyl,Cds,DVDs,T Shirts basically that kind of stuff so me and my wife Sue along with our 5 month old dog Fender (the wonder dog!) sauntered on down (Saturday Sept 19th) to look for some vinyl for our daughter Lexie as she had to work and as it turns out I scored……

Lemme tell Ya about it….

Muc was the fella who basically got Maiden Japan(recorded May of 1981)the day it came out in  late 1981(Muc bought it in Duluth!)and when i first heard Maiden Japan for the first time I friggin drooled all over my Kiss Dynasty Tour T …I mean geesh this was my first time hearing Maiden Live as just a few months earlier in the summer of 1981 I joined the Maiden ranks in purchasing Killers and becoming a lifer forever!(Yep even thru the Blaze years!)

I was blown away when I heard Maiden Japan for the first time ever! WOWZERS! Iron Maiden was on full audio assault on my young noggin! Live they brought it big time and delivered ….

RUNNING FREE-  Dianno asks The Japanese faithful ‘wanna hear Ya sing!”Maiden punch the gas fast and furious on Running Free! I have  heard a lot of versions over the years with Bruce but this one is played at a quick clip and Dianno delivers this tune lyrically (sounds almost autobiographical)and vocally. Too bad his career totally hit the shitter after 1981 but on Maiden Japan there are no quams about his performance! Smith And Murray are in synch on there dualing lead guitar bits whereas Harris and Burr drive the rhythm bus to the finish line “puller here at bottle top,whiskey dancing,disco hop now all the boys are after me,that’s the way its gonna be! Yup Crank The Vid posted!

REMEMBER TOMORROW-this song like Running Free is from the debut album called well,Iron Maiden! Remember Tomorrow starts off real chill and it builds up as it goes along and just unleashes when Dianno and the guitars go “aaaaaaaaargh”. Looking back you could see Harris had the vision of wanting to write epic numbers and Remember Tomorrow is a fantastic start! Brooding dark guitar bits during the verses,cranked power chording metal licks during the chorus with Burr playing a metal type shuffle on his drums. This is epic Maiden and after two full albums(debut and Killers) Maiden is kicking some serious Ass! This ends Side 1….Say Whaaaaaaa?

WRATHCHILD-here comes the first of three from Killers!  Burr smashes the hi hat and Steve-o slaps da Fender Bass while Murray and Smith launch there riffs and we’re off and this this is soooo good! Amazing that Harris being the young chap and composer back in 81 didn’t fall into any cheese schlop metal rock and kept his noggin focused and wrote deadly friggin metal tracks! WrathChild is one of the best from Killers and I love the bass during the guitar solos it just thumps and thumps and Harris riffs on his bass like a madman! Dianno lays down the law with ‘I’m comimg to getcha!” I believe him! I really did back than!

KILLERS-Killers is a wicked wicked song! This is Maiden creeping around those shady streets of London! Big time bass and drums start with Dianno throwing out some “yah yah yah!” And different lyrics which would end up on Killers! While Mr Murray and Mr Smith lay waste on there guitars and Killers rocks the grooves of the vinyl heavy! “Scream For Mercy” Watch the live vid from 1981 and guess what kids it’s from Japan! Case in point Murray and Smith are just sick on there solos! Hoooooooly Sheeeeit!

INNOCENT EXILE-Steve starts off Innocent Exile with some bass riffing and the Maiden fellas all join in! Cool that Innocent Exile was released on the Maiden Japan albums in Canada only! Ha who woulda thunk it right?! Maiden and especially with the guitars they would have little certain melodic samplings and than it all goes out the window with Murray and Smiths soloing! Innocent Exile ramps right up towards the end! Clive does some real slick power drumming and we’re done…..Say WHAAAAAAA …

IN CONCLUSION- Maiden drops down a 5 song live Ep and leaves us all wanting more! They were smart man..I was like More More More…Harris and smart manager guy Rod Smallwood go Nope Nope Nope! Leave them wanting more  and hell it worked! Maiden solidified with me the fact that they were becoming one of my favs quickly! Murray and Smith the dynamic guitar duo basically were making major strides as a quick one two punch to the throat in the dual lead  guitar school. I mean there playing is unbelievable here! Steve Harris not only played  bass but he was the main songwriter as well! Dianno sings awesome on these tracks and too bad he combusted his whole career after Maiden booted him and hired the Air Raid Siren!

Also give Maiden credit they even put it bold white print on the back of the record that a few studio overdubs were done but who gives a shit! Ha good on them! Imagine if Gene And Paul put that on the back of there Live Albums! Hahahaha ……like that would ever happen! Silly buggers those Kiss fellers are…