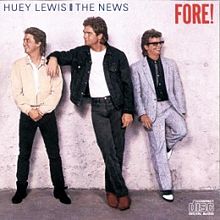 Sure the title of this post says Huey Lewis & The News /Fore(1986) but I could have added Huey’s 1983 album Sports to the title  as well.

I never owned these two albums and this is the first time I’m breaking protocol of reviewing something I don’t own but my good pal Tbone purchased and owned these so that counts for something right??

1983 and  here comes Huey and the News along with the Sports album and this album takes off like a rocket. The songs and videos are everywhere and well lookie here as Tbone is branching out and purchasing some Huey! 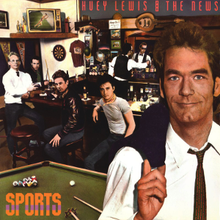 Man! That is news in my world!

I didn’t mind the Sports album actually, The Heart of Rock N Roll was a decent opening track with that snap ,crackle,  pop with a ton of horns throughout with Huey name dropping a bunch of Cities in the tune as well. What? No shout out for Tbay?

Heart and Soul/I Want A New Drug/If This Is It were all mega singles and this album kept selling right into 1984 .When the videos were on MuchMusic I never turned Huey off. Out of 9 songs on Sports,five ended up as singles.  He always made goofy 80’s rock videos. Kinda like a PG version’s of the Van Halen videos of the time(Hot For Teacher/Panama). For some crazy reason I never took the plunge and purchased Sports.

One Million Canadians did though making it to the Diamond Certification that not too many artists can do. Basically 10 times Platinum.

( I remember reading at the time that the record label  that Huey was on got snapped up by another record company so until issues were resolved financially with the new record company Huey would take the master tapes home of Sports with him overnight and not  leave them at the studio just in case  the ol record company politics crept in!)

What I did do was borrow Tbones purchased cassette and tossed it into my duel cassette at home and dubbed it. Sorry Huey!

Pretty decent album actually and I have been tinkering about buying this on iTunes, Well I have thinking about it for a few years though but I do like the fact that Huey comes across as a likeable chap plus give him a few props as he opened and hung with Phil Lynott(RIP) decades ago. Deep down Huey does have the rock in him…..

Now I wasn’t around when Tbone purchased Sports but I was with him back in 1986 when he coughed up his hard-earned cash and purchased the Fore album at Music City(InterCity Mall)  and paid though the nose for it! Like all Music City CD’s/Cassette Tapes they were obviously priced higher at the mall than a local shop.

Tbone didn’t care! These were the roaring 80’s! Cash was  flowing. A ton of music to be had and instead of buying blow we bought tunes! Lots of em… Our vice was Music Candy not Nose Candy!

I may have questioned Tbone at the time as he was drooling over the new Huey album on the new release shelf at Music City. I was leery. I think I may told him about the first single/video Stuck On You wasn’t a real   hard rocking Huey track . (First album singles always tell the tale for me. If it was a slow mid tempo tune we might have to abort ship on the release)

Tbone did not care. I quickly realised that Tbone was with the News on this one and I figured if anything I could borrow it and dub it…..

Fore had some good tracks like Jacobs Ladder and the goofy Hip To Be Square. Huey though was a smart chap. Record 40 minute albums and write a bunch of singles. Six of the ten tracks on Fore were released as singles and they were everywhere.

Maybe it was the first single that lost me by being a sluggish like track.

Tbone never even talked about Fore as in 1986 it was Van Hagar/David Lee Roth/Iron Maiden  and AC/DC (Who Made Who) that was on our  musical radar a lot more than Huey.

Still though Tbone took the plunge found some merit in  listening to the News. I’ll give him props 31 years later for this…..