Steve Earle first came up on my radar back in 1986-87 when I read about him in an issue of a Canadian Magazine called ‘Music Express’.

Earle was selling a bunch of albums in the Great White North with his current album at the time which was ‘Guitar Town’ I thought it was cool that there was an American Country act who was selling more albums in Canada than there own country(Earle is an American).

Good on him I said to myself but I was still into my major Metal Faze(well I still am in 2019 so some things don’t change) but as a country act, Steve didn’t annoy me! Lol.

Fast forward to late 1988 when I was watching TV. Now TV was way different in 88 than what it is now. If you are an old buzzard like me you will know what I’m talking about.

We had to subscribe to what they would call Pay TV. Basically, you had your 10 channels but if u wanted another 20 channels or so at the time you had to pay extra for a box set top to access those 20 channels.

Fortunately, my Mom and Dad bought into the Pay TV box at the time so I could get MuchMusic especially the Pepsi Power Hour! So one night I was surfing as there were 30 channels and nothing on when I came across the NashvilleNetwork channel when I saw this long-haired fella being interviewed on a country show called Crook and Chase.

That fella was Steve Earle. My first thought was whats a dude who looks like he could be in Guns N Roses doing on this Country Talk Show? Speaking of Gunners Steve was wearing a Guns T-shirt!

Then during the interview segment they showed a clip of Steve’s lead single from the album ‘Copperhead Road’.

Whoah this is no Hee Haw Country stuff this is basically a hard rock track done with a flair of country n rock mixed and it was and still is brilliant!

This kind of Country I can handle!

So I took the plunge and purchased Copperhead Road shortly after and it’s a great album period! 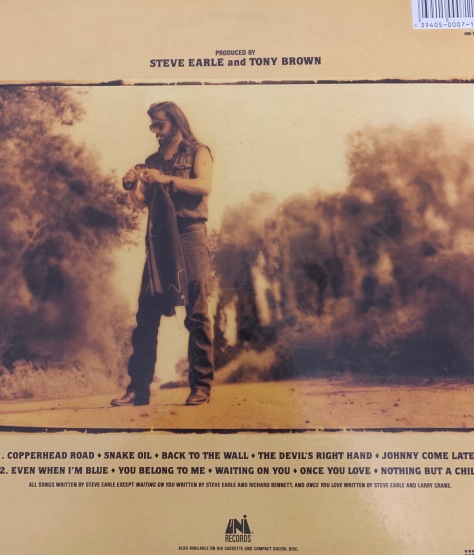 First of all look at the packaging of this record. The cover with the Skull and Crossbones gets the message across big time! The back cover as well! At some point, I will have to do a Back Covers on this record as that pic of Earle is badass!

Opener Copperhead Road is still played today on our local crap radio station which is impressive as it’s on a rock station. It shows you that Earle had crossover potential and this track proves it.

Tons of great tracks on this album. Snake Oil with a riff that is right out of any classic rock track. Back To The Wall is another of my favs off of this album. Devils Right Hand as well. I mean what a 4 track opener for any album.

While Side 1 has more of a ‘Rock’ sound attached to it Side 2 starting with Even When I’m Blue has more of that traditional country vibe in the tracks You Belong To Me/Waiting On You and Once You Love.

While the Rock Guy in me so to speak prefers Side 1 there are times you need to hear some great introspective lyrics and songs and that’s where Side 2 comes into play!

My Earle collection didn’t start and end with Copperhead Road. I ended buying the next album of his 1990’s The Hard Way followed by 1991’s brilliant live release Shut Up And Die Like An Aviator that was recorded live in Mikey Ladano’s hometown of Kitchener Ontario!

Cooperhead Road has the distinction at the time of its release by being a different kind of rock in my collection back in 1988! It didn’t matter to me as it was a solid album with an amplified mandolin cranked thorough a Marshall Amp!