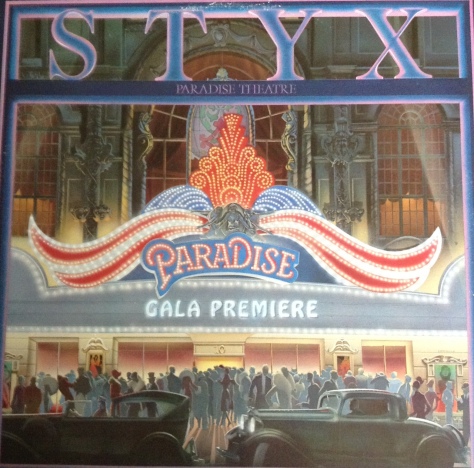 Styx release another concept album titled ‘Paradise Theatre’ which is basically about a  Theatre in Chicago that was booming with business from the 1930’s on but as the late 50’s turned into the  early 60’s the theatre went ‘Bust!‘

The album artwork is exceptional for this album. Just check it out as the front cover (pictured above) shows the Theatre in its heyday whereas the back cover(pictured below) shows the theatre run down. I had no idea the artwork for this was brilliant until I got this album. I had only ever seen the Cassette copy of it… 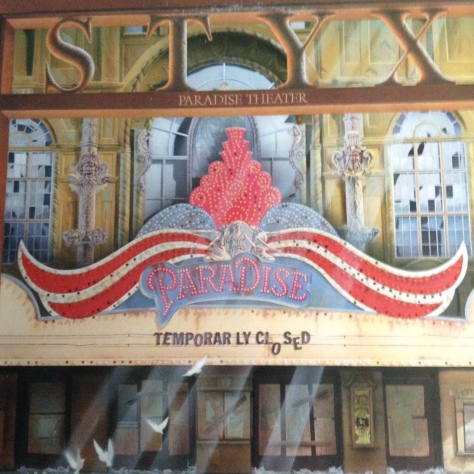 Not only is the artwork exceptional but so is the production! Styx once again produced this album in-house and I can tell you gone is the sterile pop radio AM fodder  sound of 79’s Cornerstone. In its place is a more refined harder edge sound well let me clarify that. Harder sound being Styx having a harder more direct production which sounds so much more lively than Cornerstone.

Paradise Theatre opens with Dennis DeYoung and his minute a half  piano interlude called ‘A.D 1928’ which segues right into opening track ‘Rockin The Paradise’ in which Dennis kicks ‘Babe’ to the curb and finds his rocking shoes and delivers a great opening number! Rockin The Paradise sets the tone for the album and it draws you in as a listener! Listen to that solo by Tommmy Shaw!

One of the biggie singles from this album is Shaw’s ‘Too Much Time On My Hands’ has Tommy handling both lead vocals and the solo as well. One of the biggie Styx Rock Hits! Damn catchy chorus as well!

‘The Best of Time’ was the other biggie single perhaps the biggest single from this album which features DeYoung blasting out some huge pomp AOR Rock. DeYoung knows how to craft singles I will give him that but when it comes to Styx I prefer the Shaw songs as they had a lot more oomph in them! Keep reading though as there is a secret weapon as well on this album….

Side 2 begins with another DeYoung track ‘Lonely People’.

Did I just not tell you all that Shaw wrote all the rocking Styx stuff or had a hand in it? Well ‘She Cares’ has Shaw going all mushy gushy so there ya go! What do I know?!

Remember the comment I made about the  ‘Secret Weapon’ on this album? Well that secret weapon is in the form of Mr James Young who on Side 2 of Paradise Theatre steals the show with two brilliant written tracks. Those being the Cocaine inspired ‘Snowblind’ and the brilliant ‘Half Penny-Two Penny’ which has Young handling the lead vocals as well!. Snowblind is a slow stomper of a track whereas Half Penny-Two Penny features one of the best choruses in regards to Styx tunes as the song drives along during the verse and man what a well executed chorus! Love the first verse of Half Penny Two Penny…

Half penny, two penny, gold Krugerrand
He was exceedingly rich for such a young man
Sad story, old story
Bring out the band
Another divorce just a few hundred grand!

All Hail James Young! The dude whose material on this album is never talked about but that’s a changing RIGHT NOW!

I have gotten out of posting youtube videos but I’m posting a Live Clip of Half Penny-Two Penny with James Young looking like a young  James Hetfield while Tommy Shaw looks like he’s a teenager with that Haircut! I  will add that the solo Shaw plus in Half Penny is simply amazing!

After the brilliant back to back Young tracks the album ends with two short tracks in the two and a half-minute ‘A.D 1958 followed by the 28 second DeYoung piano play out ‘State Street Sadie’.

Paradies Theatre is a pretty decent listen. A more focused album than the previous ‘Cornerstone’ album. As you may recall in my previous reviews of albums that I always talk about end of album tracks that I call “GEMS’.  Those two Young tracks pretty much in my mind steal the show at the Theatre!