Check out this great interview done by my blog pal Dave who chats with Jay Semko from the Northern Pikes. Jay gives great insight on what’s it like for a Canadian Bands to break into the American Market… Give the link a click and a read…

> PART 2 OF OUR INTERVIEW WITH JAY SEMKO OF THE NORTHERN PIKES. By late 1990 when Snow In June was certified platinum in Canada, to some it seemed like the Northern Pikes were a bit of an overnight sensation. Of course, that was far from the truth. By then they’d […]

March 3 – The Northern Pikes Began To Soar — A Sound Daya 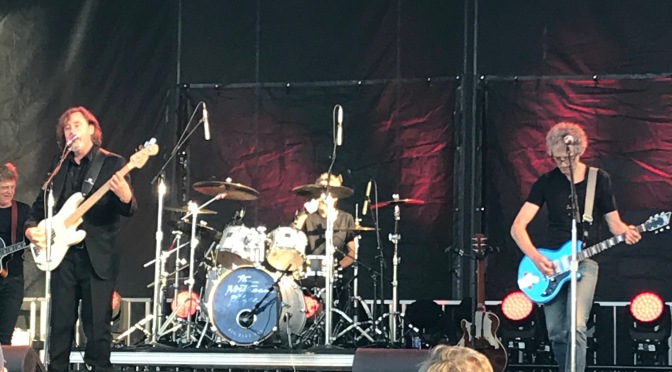 When Northern Pikes  Bassist/Singer Jay Semko announced to the  3000 plus crowd that gathered down at Thunder Bay’s Waterfront Wednesday Night that it has been close to 30 years when the Pikes second album Songs From The Alibi was released it was in a way like no time had passed but in actuality 3 decades have passed!

The rest of the Pikes that being Bryan Potvin (guitar/vocals), Don Schmid(drums), Kevin Kane(guitar/vocals) played a 60-65 minute set that featured a lot of Pike Hits throughout the years.

Taking the stage shortly after 8pm the 4 men launched into the perfect opener that being “Big Blue Sky” fitting track if any as there wasn’t  a cloud n the sky  and from there it was right into one of my favourites with ‘Hopes Go Astray’.  It’s truly amazing how many of these songs were played out on MuchMusic back in the day.

‘Wait For Me,Teenland,Things I Do For Money,Girl With A Problem,Kiss Me You Fool,She Ain’t Pretty. Tons of Good Ol Fashioned Canadian Rock filled the Wednesday Night  Marina Air!

I must add that the last time I had seen the Pikes(2006) they were down to a 3 piece with a keyboardist but now they are back to a rocking 4 piece(2 Guitars/No Keys) as Kevin Kane once played in another Canadian Act The Grapes of Wrath.  Kane performed two Grapes of Wrath tunes one being ‘Peace of Mind’ which itself was played a ton on MuchMusic as well!

It’s amazing how good these guys sound vocally as well as musically. Potvin especially when duty calls can still let it rip on the 6 string and ease of the gas pedal when needed!

A great night of ROCK! Plain and Simple!

Hopefully it doesn’t take these guys another 12 years to get back to Tbay!