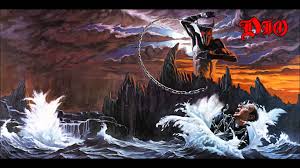 When people think of Ronnie James Dio I think it would be safe to say  that 1983’s epic DIO solo album Holy Diver would come to one’s mind!

My intro to Dio was when he was fronting Black Sabbath and if you’re talking about  favourite Sabbath albums I would tell you it would be 1981’s Mob Rules album just from the standpoint of that’s when I discovered Sabbath back in 1981. Besides Mob Rules had a bunch of classic tracks on it!

A short while later like what happens in so many bands Sabbath and Dio got all silly  with each other and Dio split and took at the time  current  Sabbath drummer Vinny Appice and they formed Dio along with bassist and  Dio’s former band member in Rainbow, Jimmy Bain(RIP).

Of course with it being 1983 Hot Shot wiz guitarists were the things to come by and Dio recruited Vivian Campbell  who basically takes Holy Diver into a whole other ballgame with his playing!

Its amazing at how this album still sounds 34 friggin years later!

Opener Stand Up and Shout has the Dio tour bus ripping down the highway with the police in hot pursuit. In other words this song sets the menu for the rest of the album. Stand Up…makes you indeed Stand Up and take notice throughout. The pace is frantic. Campbell easily becomes the one to watch on this album as he sets fire to his fretboard on the solo part of the track while Appice just slams around on his kit like nobodies business!

Track two and its the title track Holy Diver. What can I add to this song that already hasn’t been spoken or written about? I will say I love the groove set forth by Appice/Bain and another killer solo by Campbell and of course you get Ronnie’s lyrics and the way he sings. How about that opening lyrical line..

Holy Diver
You’ve been down too long in the midnight sea
Oh what’s becoming of me..

I totally think of the album cover of Holy Diver(with band mascot Murray whipping around that chain at the priest) when I hear Dio sing this line..

From there Gypsy soars right out of the gate with Campbell riffing like there is no tomorrow. ‘She was right out of Hell” sings Ronnie. Love the stomp of this track as the drums/bass/guitar just plow this song forward. Another huge solo from Vivian as that fret board is smoked!

Caught In The Middle has the pace set with Campbell and another straight ahead rocker. Dio soars vocally on this track

Don’t Talk To Strangers has to my ears a total Sabbath vibe as the song starts off real chill with the blend of acoustic and electric guitars and even Vinnie who was laying wast to his skit on the first 4 tracks even gets a moment of relaxation but before long  the song takes off and ramps up quick! This track chills out towards the end and once agin picks up steam….

Invisible starts off all trippy dippy like musically but rolls right back into familiar hard rock territory with more superstar axemanship.

Ok! Raise of hands. Who has not heard Rainbow In The Dark? Exactly we all have as it in indeed in an all time classic and man what a freakin fantastic guitar solo. This song has a wicked verse/chorus/everything. Like that twisted psycho like keyboard that’s swirls in an out at times.

Hey who woke up the wolves? Shame On The Night is another Sab like scorcher that rolls at a medieval pace that even has an evil Dio like scream at the end. The song just lets itself go at the end in a Sabbath like crawl…

What a debut solo album for Ronnie James. What a scorcher of a debut for Vivian Campbell who comes out of nowhere and rockets these songs to the top. The dude shows us that back in 83 that the concept of great hard rock singer mashing up with a hot-shot  6 stringer could reap huge benefits!

Too bad that when Campbell joined Def Leppard in 1992 they didn’t let Vivian wail on the guitar like he does on the early Dio albums.

Holy Diver proves that and basically made me purchase 1984’s Last In Line right away upon its release.

I always wondered what Ronnie’s old Sab mates(Tony and Geezer) thought at the time around 1983 when they heard Holy Diver for the first time as Sabbath was out recruiting Ian Gillian for Sabs Born Again album?

I’m thinking Geezer and Tony muttered something like “Ahh freakin fizzle sticks. We gotta step up!”