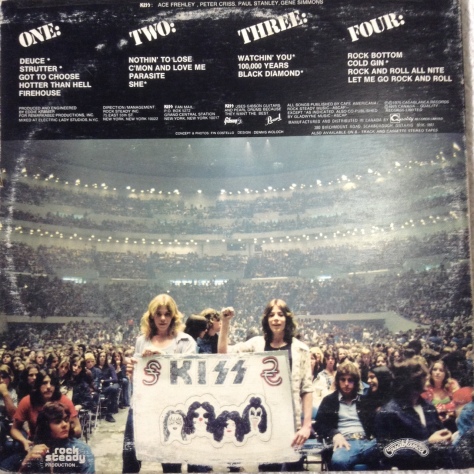 Welcome to a new series here that I’m calling Back Covers. It’s a simple concept really as we all have our favourite Album Cover’s right? Well how about some albums and their Back Covers which no one ever talks about! Well that’s changing now as were gonna give some acknowledgement to some of these real slick-looking  Back Cover’s!

Fellow Blogging Pal steveforthedeaf left a comment saying he was hoping I would tackle and post something in regards to KISS-Alive!

KISS Alive is a classic album period! Whether it’s live or not it does not matter to me. So much so that I would have Alive listed as both in my all time Top 3 KISS studio and live release’s. That’s how good it is!

What always was impressive was the back cover photo taken at Cobo Hall in Detroit by Fin Costello back in 1975!

Talk about an Impact Pic if there was one! Amazing to see thousands of the KISS Army with two dudes holding up a sign showing their dedication to KISS! Kind of a smart marketing move to feature these two chaps as it shows everyone out there that KISS at the time was a  band of the people!

What a thrill for those two guys to have us still talking about “THAT” photo 43 years later! The two fella’s in question are named Bruce Redoute and Lee Neaves. Here’s an updated pic of them below holding the exact same poster that they drew decades earlier at the exact same spot in Cobo Hall! 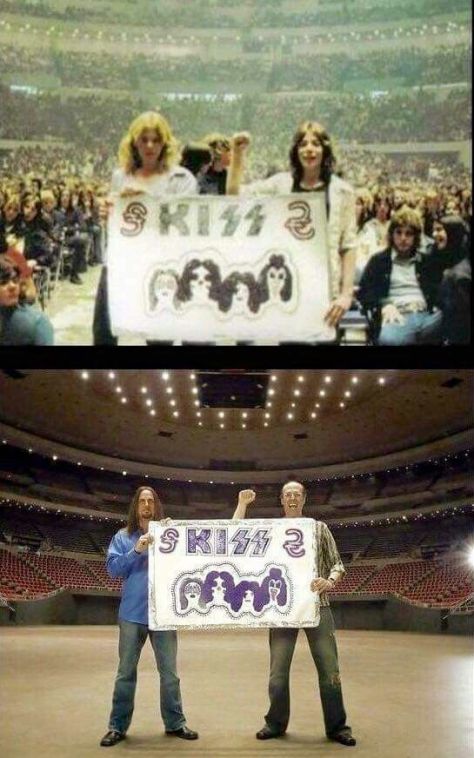 If you look real close at the pic posted above on you left you see what appears to be someone holding a shiny object. A couple of KISS chat forums  figure that it’s one of the two dudes holding their homemade KISS banner. Wild huh?

The front cover pic of KISS that graces the cover of Alive is not from the Cobo Hall show but instead it was shot at an empty rehearsal hall in Detroit.(Michigan  Palace)

This is an iconic Back Cover photo as it shows how KISS was becoming a huge touring act back in 1975 even though their record sales weren’t quite there yet! After the release of  KISS Alive that all changed!

39 thoughts on “Back Covers: KISS-Alive”