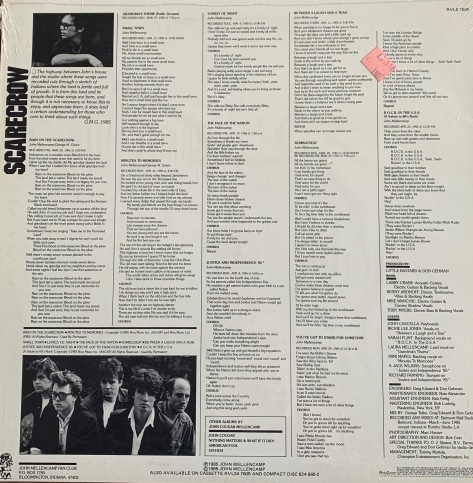 Scarecrow was a one big rock album back in 1985 even into 1986 as John Cougar Mellencamp on this being his 8th studio release had seven singles released from the Scarecrow’s 11 songs!

LET’S STEP BACK IN TIME… JCM was an interesting artist to me in the ’80s. I knew of John as he was only known as John Cougar when John opened for KISS in Duluth Minnesota back in October of 1979 a show in which I attended and as well had a couple of firsts for me!

1-My First ever concert!

2- First time seeing an artist get royally booed throughout there opening set.

Sorry, John. Duluth was expecting Judas Priest who was advertised as ‘The Special Guest’ but canceled. All set long it rained boo’s until he announced the last song in which he got a ‘mock cheer’. A tough crowd in Duluth man! What a show to see as a 12-year-old!

Not that John let that night in Duluth deter him. No folks John soldiered on of course had a huge run of hit songs starting of course with Jack and Diane and Hurts So Good from his American Fool album in 1982.

At the time I didn’t bite on John Cougar. Why I have no idea as his music was even played on our local shitty radio station here in Thunder Bay.

I still couldn’t be bothered. My buddy Muc though loved John’s 1983 release Uh-huh which had Pink Houses and the real cool Authority Song! I still didn’t take the bait that John was serving musically even though it was Rockin.

I couldn’t do it until…John becomes John Cougar Mellencamp and viola unleashes Scarecrow in August of 1985 and with Myself/Muc/Tbone and countless others entering Grade 12 Scarecrow was everywhere.

Lot’s of my friends were going on about how great Scarecrow as the album was and such.  Hell, we had a pal back in High School who loved this album so much, we called him Scarecrow. The funny thing was he was tall and lanky so he fit the bill as a Scarecrow!

I think it was the summer of 1986 and I finally caved and bought Scarecrow on cassette tape for my good old trusty Walkman. With it being on cassette of course on the inside of the tape there were no credits. Nothing! It was blank.

FAST FORWARD TO THE PRESENT!

On my last few recent record jaunts to my fav-o place for used vinyl in Thunder Bay (Moon Money Vintage), I noticed Scarecrow in the bins. I kept passing it by yet every time I went back and it was still there. After lots of consideration, I finally decided to pick it up and flip it over and…

LOOK AT THE BACK COVER! GOSH DARN IT...what a brilliant concept!

All the info you need is on the back cover! Band picture! Song titles! You even get the date and times when the songs were recorded for the album. I had no idea!

This is one cool back cover. You have to admit even if you are not a fan of Mellencamp you gotta hand it to him as this was a pretty creative idea.

Out of all the albums I have ever owned whether it was 30 odd years ago or the records that I have currently picked up this is a great concept! To get a better look, just click the picture at the top! All black in white, total standout!

Awesome stuff! I like the fact that back in 1985 it was available on Record/Cassette and CD! Compact Disc?? This was 3 years before I even started buying CD’s which I didn’t start doing until later on in the Spring of 1988!

Creative Cougar was pulling out all the stops on this release! I will say this back cover would fall under the category of simple yet effective!