I still remember seeing the adds for Plant’s second solo album “The Principle of Moments” in Circus Magazine as well as Creem and Hit Parader.

But that summer of ’83 when this album hit the racks in Thunder Bay  I wasn’t feeling it and it was nothing personal but as you may recall from my words on “Pictures At Eleven”, I didn’t really get that hard rock vibe that I was looking for.

Besides in 1983  my listening was to give you an example albums like “Holy Diver”, “Piece of Mind”, “Metal Health”, “Pyromania”, “Flick of The Switch” and I guess we could add “Synchronicity” in this mix as well!

Thats where my head was at sonically.

Even though the  two singles from “Principle of Moments”, “In The Mood” and “Big Log” were on rotation on MuchMusic. I still didn’t take the bait.

That is until now. I’m older not necessarily wiser but let’s get on this stuff as I can appreciate it now in 2021!

Let’s rewind to 1983 when Robert put this one out.

Plant was smart in bringing back the same production crew as well as the same band. If it ain’t broke Robert isn’t fixing it. More on that later.

While Robert still had a shade of Zep in couple of tracks on his debut. This album though sheds that sound pretty much throughout the albums eight tracks. 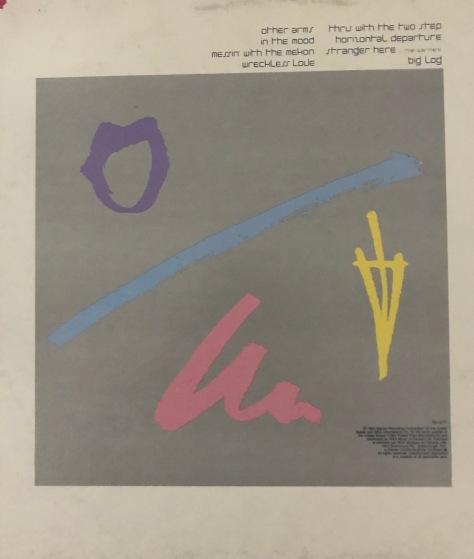 You can hear the influences of mainstream rock at the time on opening track “Other Arms”. A very crystal clear sound. The drums of Phil Collins and the guitars of Robbie Blunt shine on this album and throughout the record.

A pretty snappy straightforward bass line drives the single “In The Mood” while Blunt shines once again on the other single “Big Log”.

Plant though can sing any style and this album proves that point. “Wreckless Love” and “Other Arms” prove this theory as Plant had adapted himself by ’83 to the modern sounds of rock. (David Bowie did the same thing on his “Let’s Dance” release which ironically came out the same year as this album)

Speaking of Bowie. Robert and David were smart as they both changed with the times and that could be a reason why their solo careers thrived in the ’80s and did not stall.

This was another batch of songs from Robert that would have sailed over my head at the time of its release but I can honestly say its a good album and give the man his due as he was doing what he wanted to do.

You have to respect him for that.

Ok, if you recall earlier I mentioned Plant bringing back on “Principle” the same production team as he used on the “Pictures” album as well as each album had eight songs.

What is really wild and I’m not sure if this has been printed and I’m sure it has but like on the debut Plant solo album, Phil Collins drummed on six out of the album’s eight tracks.

Tracks four and seven from “Pictures… Slow Dancer and Like I’ve Never Been Gone” respectively  were handled by Cozy Powell(RIP) doing the drums on the debut album.

Tracks four and seven from “Principle… Wreckless Love and Stranger Here…Then Over There” respectively were handled by Barriemore Barlow.

I think I need to hit up Robert for an explanation on this.