Just received  Rock Candy’s Latest Issue (#5) in the mail and its a scorcher of an read!

All 5 Issues so far have been excellent but this latest one is just stellar! First of all love the old cover shot of Ozzy & The late Randy Rhoads taken in 1981 by Mark Weiss and the Rhoads feature is 14 pages long. Sure millions of pages have been written about Rhoads since he died tragically in that plane crash back in 1982 but the fourteen pages of articles spin different  scenarios than what I have read about Rhoads in the past!

Interviews with Rhoads’ first guitar tech Howard Friedman. An unreleased article from former Sounds Writer Gary Bushell and the real score an interview with Bernie Torme who was drafted in right after Randy’s death (Before Brad Gillis took over the 6 string duties) to replace Randy to keep the Diary of a Madman tour moving. Even wilder is there’s a live shot from those few weeks that Bernie was onstage with Ozzy that is printed as well! I call that picture the Money Shot!

A great article on Cheap Tricks Budokan release is featured with a current interview with Rick Neilsen & Robin Zander.  Also of interest is a throwback late 80’s Hair Metal article on White Lion and a current interview as well with  White Lion vocalist Mike Tramp who details in full what the hell happened as White Lion came as fast as they went! One of the most interesting comments that Tramp speaks about is  when he announced to White Lion Guitarist Vito Bratta that he was finished with White Lion after an upcoming  show in Boston (1991). Bratta’s response was a simple “Ok!” They played that final show and Vito walked away never to be seen or really heard from again!

Bev Bevan as well is interviewed! Who is Bev Bevan?  Well  I will fill you in as he manned the drum stool on Black Sabbaths Born Again album/tour back in  1983 that for all intent and purposes is either one of the most liked Sabbath albums or the most disliked. Eight pages are featured here on the album and as well Bevan gives some real great insight on  the albums sound and the tour that followed it. Great read! 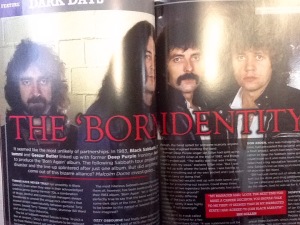 Bostons debut album is featured in the regular monthly Artist Graphic feature where an artist describes in detail what goes into his vision of what the artist wanted as there cover for the record buying public to see! (On a personal note I hope to see Derek Riggs featured at some point perhaps Powerslave or Somewhere In Time can be examined. How about it Hojo?!)

Jesse Fink  who wrote the fantastic book on Bon Scott’s last three  years of his life(1977-80) titled Bon Scott ‘The Last Highway’ explains his journey on how he went about putting together this brilliant look at  AC/DC’s late frontman!

I could go on but seriously this is such a great magazine that has one foot on the past while the other foot is on the present in relation to speaking to artists/bands that were there back in the hey day!

Thanks again to Hojo/Derek Oliver/Malcolm Dome and John Nicholson for getting this mag out! Speaking of which it should be stocked in Canada now at Chapters (book store) so if you’re cruising through the aisles check it out. Better yet………

BUY THE DAMN THING and support this Mag!